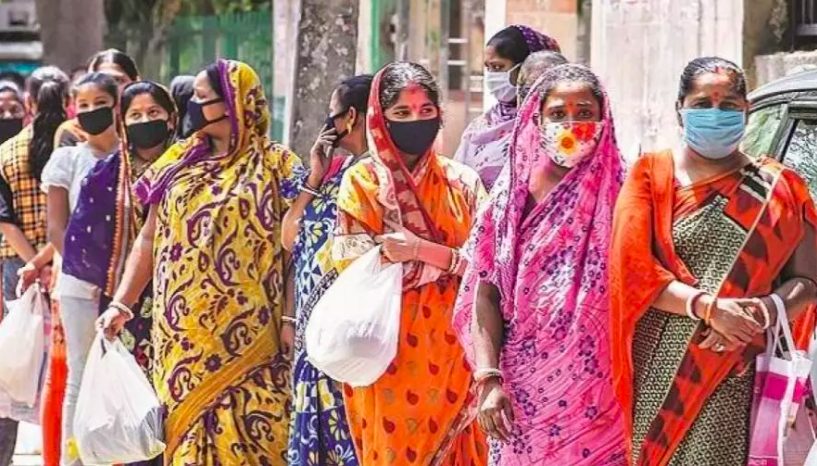 The second wave of the COVID-19 pandemic that has continued to wreak havoc in urban pockets, seems to be gathering pace in Uttar Pradesh’s rural hinterlands where healthcare facilities are already in an abysmal condition, there is a lack of testing facilities and COVID-appropriate behaviour is only in rhetoric.

The absence of proper medical facilities in these rural areas, shortage of doctors and paramedical staff at the Community Health Centres (CHC) at the block level, and unawareness about the gravity of the disease seem to be making the situation worse. In many districts, the authorities do not have records of deaths caused by the deadly virus.

Despite the onset of the second wave, panchayat elections were also held in the state over the past few weeks. Many health experts have blamed the Yogi Adityanath-led Bharatiya Janata Party government for conducting panchayat elections amid the ongoing massive COVID-19 crisis in the state. They have said that during the first wave of the pandemic in 2020, in Uttar Pradesh, rural areas remained more or less unaffected despite large-scale migration of labourers in the wake of the unplanned nationwide lockdown. But this time around, panchayat elections, Mahakumbh, marriages, religious events and people traveling for panchayat polls from big cities have aggravated the COVID-19 crisis in the villages.

Rajdev Chaturvedi, a health activist based in Azamgarh associated with the Health Watch Forum, an NGO focusing on health crisis in rural areas, said: “Many people in the rural areas are suffering from high fever, cough, and are also complaining of breathing problems. Patients infected by the virus have not yet been tested in most rural areas as they are completely dependent on ‘jhola chhap‘ doctors (quacks) for treatment in the absence of ample and accessible healthcare facilities,” Chaturvedi told NewsClick, adding that panchayat elections turned out to be a “super spreader” phenomenon in villages as the polls made many voters travel back home from Mumbai, Delhi and Gujarat. “Most of them are now are sick. The social distancing norms to curb the COVID-19 infection went for a toss during Uttar Pradesh panchayat elections,” he added.

According to Chaturvedi, over 605 fresh cases of the infection were reported from the Azamgarh district on Friday where at least five have died due to the virus. There are around 4,946 active cases in the district. “COVID patients, due to shortage of bed, oxygen and medicines, are dying every day. Four days back, at least 17 patients died at PGI, Azamgarh,” he said.

Health authorities say that apart from the panchayat elections, a large number of pilgrims visited the Haridwar Kumbh and several of them have tested positive. Around 50% of the cases being reported are from small towns or villages even when the testing is far less than required. The number of active COVID-19 cases is almost nine to ten times of what it was last year.

Talking about the situation in Banda district, Raja Bhaiya, secretary of the Vidya Dham Samiti, an NGO in Banda, said that many people in every village “are sick and are dying quickly”.

“Patients are not able to reach hospitals in the absence of resources and those who manage to, do not get beds or oxygen. I cannot quantify as to how many people have died in Banda district, but in Attara block which has a population of over one lakh, 250 people have died so far,” Raja Bhaiya told NewsClick, adding that the deaths due to the virus are not being recorded properly by the district authority. “If 200 people die due to the coronavirus, only 5-10 are shown on record,” the activist claimed.

“The villagers ignore the fever and the bodyache and treat them as symptoms of seasonal flu which they think will pass with time. Before they can realise it is corona, they die,” the health activist told NewsClick.

ALARMING SITUATION  IN VILLAGES, MAY TURN INTO A CRISIS

Compared to the first wave of the pandemic where the cases were limited, the ongoing wave has spread rapidly in tehsils and in rural areas. In Western Uttar Pradesh, Saharanpur, Meerut, and Amroha, in Purvanchal, Azamgarh, Ballia, Gorakhpur, and Deoria have witnessed a steep rise in the number of cases.

According to the state Health Department data, on May 6, 63 cases were reported in Budhana tehsil, 94 in Morna tehsil, 175 in Muzaffarnagar Rural, 264 in Muzzafarnagar Urban, 59 in Khatauli tehsil and 57 cases in Jansath tehsil, which has also reported 21 deaths. The state government has recommended rapid antigen tests for villages to gather data on infected patients.

As of May 7, 190 people have died in Ballia from COVID-19. Over 70 of these deaths have occureed in the past 21 days. According to the government figures, there are 3,012 total active cases in the district, with 2,554 people in home isolation.

Similarly, 55 people have died of fever in Juggaur viilage — at a distance of 19 km from Lucknow — in the past two weeks. In Rudauli of Barabanki, half a dozen villagers have died in Pakkaudi village, prompting the district administration to carry out surveillance. In Bhaupur village of Ayodhya, 32 people were found COVID-19 positive after deaths were reported.

Neeraj Mishra, former Resident Doctors’ Welfare Association (RDWA) president of the King George’s Medical University (KGMU), said that during the first wave, they could quickly identify new cases and isolate them as there was a lockdown and hence, movement was restricted. “But in the second wave, all protocols went for a toss during the panchayat elections. The state government is still using the hit and trial method in rural areas despite second wave leading to devastation in big cities like Lucknow, Varanasi, Kanpur, and Prayagraj. There are no ambulances, oxygen or medicine facilities. Where will the villagers go once the things are out of control? Hospitals in the cities are all filled to the brim,” Mishra told NewsClick, adding that “corona bomb” will soon explode in rural areas. He also felt that the panchayat elections can be held responsible for the impending crisis.

Dr Mohan from Sitapur said that only comprehensive testing could reveal the truth about the COVID-19 crisis in the villages. “It is high time we focus on treatment instead of constituting teams of nodal officers for inspection as the infection has already spread in villages. Teachers, assistant teachers, ‘shiksha mitras‘ and other state employees were sent to polling centres for the election duty, despite them having complained of COVID-like symptoms; they ended up infecting others. Now, the need of the hour is to make oxygen and medicines, particularly steroids, available at the primary and community health centres so that those having symptoms can be tested and treated immediately.”

Meanwhile, the Allahabad High Court on Friday directed the Uttar Pradesh government to explain how it was dealing with the surge in COVID-19 cases in rural and sub-urban areas, and smaller cities of the state.

The smaller districts and cities got unfortunately ignored and also did not get the attention of the media, the petition in the court has claimed. “Surge in cases is now being seen in rural areas also and the situation has alarmingly worsened for want of proper medical care,” it said.

According to the Health Department, on April 1, Lucknow, Kanpur, Prayagraj and Varanasi were the only districts in Uttar Pradesh where more than 100 COVID-19 cases were being reported. From April 27, however, between 100 and 500 are being reported daily from 41 districts with rural backgrounds. The death rate of districts with rural backgrounds has also increased by more than 10% between April 15 and 25. “At least two people in every household are suffering from fever and other diseases. There are also many patients who are forced to treat themselves by arranging for oxygen at home as the government has failed,” claimed Rakesh Singh, who lives in Bansgaon village which has a population of 8,000 people and 3,000 households.

It must also be noted that 800 government employees have allegedly died due to COVID-19 following their deputation for the panchayat polls in the state.

Accusing the Yogi Adityanath-led UP government of “gross negligence” in conducting panchayat polls amid rising COVID-19 cases, the Rashtriya Shaikshik Mahasangh (RSM) – an RSS-affiliated union of teachers, had told NewsClick that the government and the state election commission are responsible for the death of the employees.

Amid the ongoing crisis, the Uttar Pradesh government has completely shut the outdoor patients departments (OPDs) in the entire state for the Past 15 days. The decision was taken by Chief Minister Yogi Adityanath after reviewing the COVID-19 situation in state along with other senior officers.

“Those having fever, cold, cough or bodyache have no way to go or consult a doctor Therefore, they are left only with one option: the ‘jhola chap’ doctors. If OPDs would have been operational at this time, the doctors would have been ablet to recommend L1, L2, L3 or home isolation. People in cities have the option to consult private doctors, but what about villagers?” asked Dinkar Kapoor, a member of All India People’s Front (Radical).

Last year, the Allahabad High Court had passed an order on PIL filed by the All India People’s Front through its national spokesperson S R Darapuri, a retired IPS officer.  The court had asked the government to explain the restrictions imposed on the hospitals and nursing homes.

Meanwhile, with active COVID-19 cases touching an all-time high and growing number of critical patients battling for life amid shortage of beds, medical equipment, medicines and oxygen, it has come to light that the ventilators sent by the central government using PM CARE funds are gathering dust in several district hospitals of Uttar Pradesh including in Agra, Ballia, Deoria, Balrampur, Siddharthnagar and Sitapur.