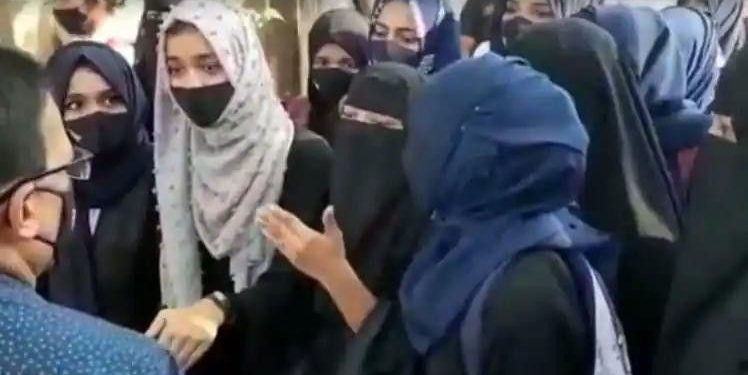 CJI not for urgent listing of Hijab case, says SC will hear it at an appropriate time

THE Supreme Court, on Friday, observed that it would take up the issue concerning the ban on the Hijab in educational institutions in Karnataka at an appropriate time.
The Chief Justice of India [CJI] N.V. Ramana, declined to grant any urgent listing of the appeal filed against the Karnataka High Court’s interim order restraining students from wearing the hijab or any other religious attire to educational institutions till it decides the matter.
Senior Advocate Devdatt Kamat, on behalf of two Muslim girls, mentioned the matter before the CJI, seeking urgent listing of the appeal against the High Court’s order.
“It’s rather strange that the High Court says none of the students should disclose any religious identity when they go to school or college. This has far-reaching consequences and implications, not only for the Muslim community but also for other faiths. For example, Sikhs wear turbans when they go to schools or colleges. This is a complete suspension of Article 25 of the Constitution”, Kamat submitted.
Responding to Kamat, CJI Ramana said the High Court is already hearing the matter on an urgent basis, and “we do not know what the order is”. Appearing for the Karnataka Government, Solicitor General Tushar Mehta said the order has not yet come out. He added that the high court be let to decide the constitutional issue involved in the matter.
Kamat insisted that the Supreme Court hear the matter and decide on the interim arrangement.
Responding to him, CJI Ramana said he does not want to express anything at this stage.  He said: “Do not spread these things to a larger level. We are watching. We also know what is happening in the state as well as in the hearings also. And you also need to think about whether it is proper to bring these issues to Delhi.”
Kamat replied that these are purely legal questions, and the Court has to decide. CJI Ramana remarked that the Court would definitely examine if something wrong is done.
“We have to protect the constitutional rights of everyone”, CJI remarked while declining any urgent listing of the petition, but added he would take up the matter at an appropriate time.
A full bench of the Karnataka High Court comprising Chief Justice Ritu Raj Awasthi, Justice Krishna Dixit and  Justice Khazi Jaibunnisa Mohiuddin on Thursday said it would pass an order prohibiting religious dresses in the educational institutions for the time being to maintain peace and tranquility. The High Court is hearing a batch of petitions filed by Muslim girls challenging the ban on wearing hijabs in schools and colleges across Karnataka.
Senior advocates Sanjay Hedge and Kamat, for their respective petitioners, have been arguing that the ban on hijab is violative of freedom of expression (Article 19), right to privacy (Article 21), and freedom of religion (Article 25). Besides, it is being argued that the state government has no power under the Karnataka Education Act to prescribe a particular uniform.
On February 9, a single judge bench of the High Court referred the matter to a larger bench, observing that whether the wearing of hijab is a part of essential religious practice in Islam needs to be answered in the light of constitutional guarantees available to the religious minorities.