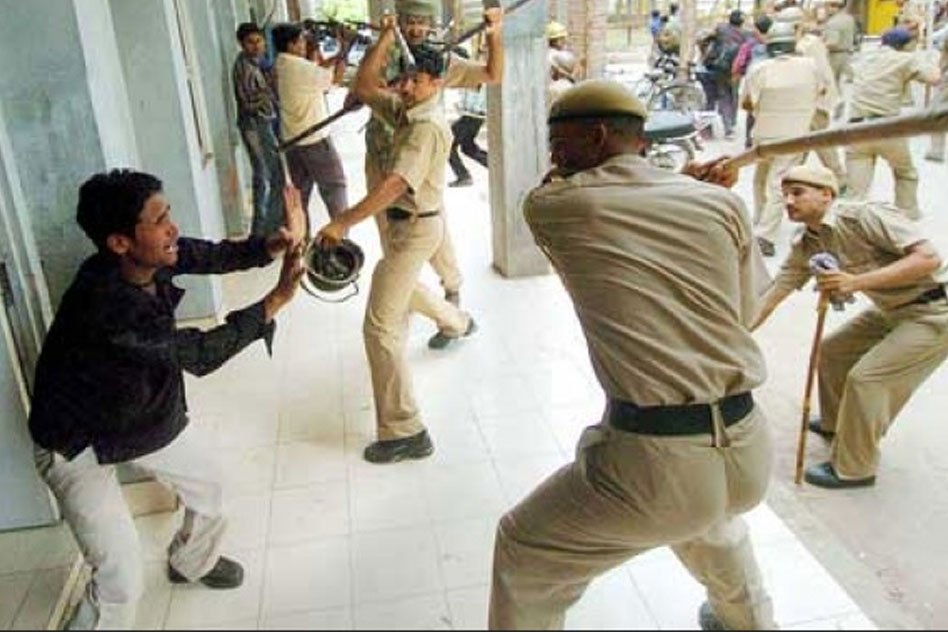 With the increasing call to defund the police globally, the role of police in India is being questioned and reexamined. ANURAG TIWARY explores the reasons behind police brutality in India, and draws out the role of the citizenry in the menace.

THE institutionalization of police brutality, as an unofficial policy of the State, poses a serious challenge to every modern civilization. It doesn’t just raise obvious questions around respect for human rights and the rule of law, but is also a serious threat to the survival of democracy in a state where the Constitution is supreme. This threat stares in our faces today.

With increasing cases of police brutality, calls to defund the institution and even derecognize it, are on the rise in the West.

India, until now, seems to be an exception to this global sentiment. While the debate around police reforms across the globe has slowly intensified and people have been on the streets, there is a lack of any meaningful discourse on the same in India. There is very little public outrage and, in many cases, strong public support for police misconduct. Academic literature on the subject is often repetitive and fails to take a brave position on the issue.

This piece attempts to analyse the primary reason behind increase in police brutality. It argues that it is the failure of the citizenry to meaningfully engage with the State on critical and key issues that has led to such an unfortunate development. In doing so, it critically analyses those key issues with the help of several recent domestic developments.

The rise in police brutality in India is due to the failure of three key stakeholders: the Parliament and the Executive (that is, the political component of the State), the Judiciary, and the citizenry.

The failure of the parliament to decolonize statutes, remove unreasonable immunity granted to police officers under the laws and create foolproof legislations after due consultation from every stakeholder, is evident. The failure of the executive to control and discipline the police force is equally obvious. Accountability for law enforcement misconduct is flawed, and has huge structural problems.

The judiciary has also failed in the sense that its judgments are given little importance and are virtually not implemented for all practical purposes by police officers on the ground. For instance, in its landmark judgment in the case of Prakash Singh & Ors. vs. Union of India (2006), the Supreme Court issued several directives for police reforms. 15 years since that judgment was delivered, no state or Union territory has fully complied with its directives.

Landmark judgments like this therefore end up becoming good pieces of jurisprudential literature and only have a symbolic value. After all, it makes no sense when you have landmark judgments that prohibits the police to commit acts of torture and violence and yet, there are large scale violations of those judgments that take place regularly and unabashedly without any backlash.

As a key stakeholder, citizens form the backbone of any democracy and act as counter-narrative to forces that promote democratic backsliding. Their actions and nature of engagements define politics and policies of the State. It is, after all, true that the political system is merely a reflection of its masses.

In the case of police brutality there are atleast three, if not more, issues that the citizens have failed to engage with the State on: the rise in majoritarian politics, increasing corruption, and the rise in predatory capitalism.

Such a rise in majoritarianism has led to huge transformation in the Indian political ecosystem. It has inter alia given birth to populist leaders and their politics of appeasement. It is because of this rise in the latter that we now see a new tendency of the State to use the police force as a tool for political mobilization.

We see this happening in Uttar Pradesh where the state government highlights encounters as its achievements on a Republic Day and its sitting Chief Minister publicly announces – “agar apradh karenge to thok diye jayenge” (if you commit crime, you will be knocked off). The Chief Minister also, at regular intervals, informs his voters through the media, almost pompously, about the number of encounters that have taken place under his regime. The trend in UP has now spilled over to states like Assam and other areas.

When communal riots broke out in North-East Delhi last year during the anti-Citizenship (Amendment) Act protests and post the police attacks on the Jamia Milia Islamia University campus, almost 53 citizens lost their lives, hundreds were left injured and many places of worship, houses and shops were burnt down by mobs.

The police’s role in the investigation that followed has been filled with suspicion. In one of the cases, while discharging three accused persons, a court noted that the investigation was a “colossal” and “criminal” waste of taxpayers’ money. It also said that the police had failed to conduct a “proper, scientific investigation” thereby “tormenting the sentinels of democracy”. A Delhi sessions judge critical of the role of the police was later transferred.

Also read: State machinery at odds: What Delhi courts have said about the Delhi Police’s investigation of the Delhi riots of February 2020

A fact-finding report titled “Christians under Attack in India” released recently by three rights groups reveals how there is a growing menace of hate crimes against Christians in different parts of the country by right-wing Hindu nationalist groups, and the police’s blatant complicity in the same.

All of the above instances are examples of how a majoritarian state suppresses the minority in order to reinforce and perpetuate the division on which its politics survives. Most often than not, such a suppression is in the form of police brutality.

Police force is by far, the most corrupt institution in India. There are two kinds of corruption within the police force in this country:

One is the monetary compensation that police officers receive from common citizens to deliver preferential treatment in matters of law enforcement. Second is a specific kind of political corruption that seeps down to the police force in the form of receiving personal gains, career advancements and such other kinds of favors from their political bosses in return for acting or not acting in a certain way. A report by IndiaSpend states how 28% of police respondents mentioned that political pressure is the biggest hindrance in police investigations.

Public outrage against corruption in the police force has been rare and discourse over its relationship with police brutality rarer still. It is but obvious that corruption within the police force is directly proportional to police brutality. It is purely an economic model – the ones who pay will get away and the ones who don’t will either be met with state sponsored violence or eventually face the wrath of an extremely hostile administration. This is primarily also because of the huge powers and discretion that the police enjoy under our laws.

Also Read: Are the Police Seen as Perpetrators of Crime or Protectors in India?

The police force in India was formed under the British Raj through the Indian Councils Act of 1861. The Britishers had just taken over the affairs of the East India Company in 1858. The idea for a special police force was inherited from the East India Company, which had introduced the ‘Cornwallis System’ or the ‘Daroga System’ in 1764, wherein each district was now divided into ‘thanas’ headed by a daroga. The company had brought in the Cornwallis system only to strengthen its hold over the Indian population and to check any act of conspiracy or revolution against the company. This is evidence of the fact that the origin of the police force itself was to protect the capitalists and their interests and not prevention of crime.

Circa 2021 and our world is completely run by markets today. The idea of capitalism itself has undergone massive transformation. From being once regarded as a tool to prosperity, it has now become a means to oppress the working class and further deepen divides and differences among people.

The gap between the rich and poor is at an all-time high. Human relationships and social interactions are increasingly shaped by economic considerations through a cost and benefit analysis.

In a State where there is increasing level of competition, cops do policing only to serve the interest of the capitalist class and protect the ‘rule of the capital’. The role of the State under a capitalist system has also changed. It has today assumed the position of a facilitator rather than a regulator. This is primarily because of its financial dependence on businesses.

Capitalists today control all aspects of human life. From science to education and culture, they wield unimaginable power. For predatory capitalism to succeed, the working class will have to be necessarily silenced and their voices quelled. That’s when the capitalists, with the help of bourgeois politicians (often elected to power with the help of capitalist sponsors), use the police to propagate violence against the working class in order to suppress their voices of dissent.

The state of police infrastructure in the country is also evidence of how the police exists today to further the interests of the capitalists. The unequal distribution and subsequent utilization of resources for police infrastructure in Delhi vis-à-vis rural Bihar and Uttar Pradesh shows how we treat those who are at the bottom of the pyramid versus those at the top.

Police infrastructure in cities like Delhi, Mumbai and other metro cities are relatively much better, modern and advanced than in rest of the country. It is not a mere coincidence that both capitalists and bourgeois politicians are concentrated in the cities and not in the rural parts of India. Quite obviously, this means that their lives matter much more than the lives of those living in the villages.

This has not been seen in India. Public outrage has therefore been misplaced, and will need an overhaul to tackle the problem more effectively.

There is no single point solution to the three problems raised above. It is also not my claim that citizens have done nothing in the past to reclaim control over the issue. However, they have failed as a group to counter the violence perpetrated by the State by not raising the right questions, and failing to engage with the powers that be on issues that are critical to solving the crisis within the police administration.

Most of the times, they have abetted these excesses by either supporting their violence or by falling prey to their politics of polarization and appeasement. This needs to stop.

This is a problem that needs to be seen by zooming out and rising above parochial concerns. The way out is a more informed citizenry, with higher levels of civic education and democratic participation, that understands the vicious cycle of this mess and the precarious state of affairs that this is leading us all to. Until then, we can go back to talking about police reforms.