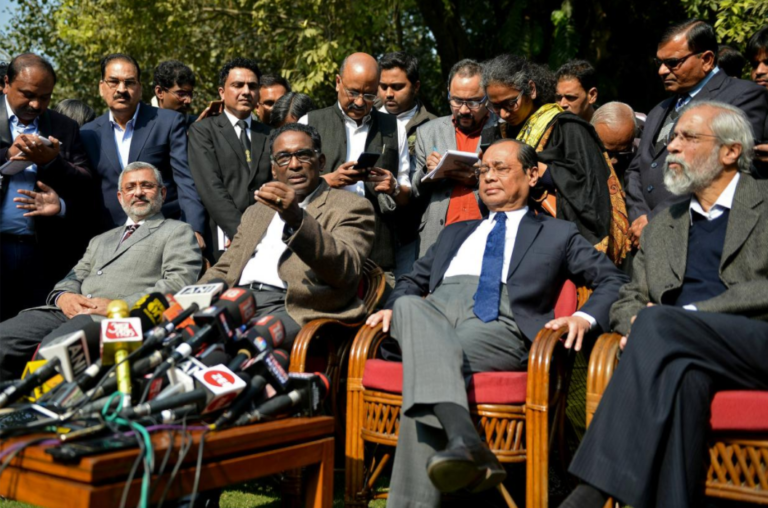 Challenging period for constitutionalism in India

The Judiciary in India is undoubtedly the most respected organ of Government in India. The soul and heart of this respect comes from the integrity of the Courts and their relative independence from the executive and the legislature. There are few defining moments in the history of the judiciary when judges have put their neck on the line to stand up for institutional integrity, the actions of the Supreme Court judges on 12thJanuary, 2017 should be counted as one of those moment, especially in relation to Justice Gogoi who has chosen to speak up even though he is slated to become the next Chief Justice of India.

The 1970s posed a challenging period for constitutionalism in India in light of an authoritative government which saw no qualms in using its brute majority in Parliament to pass numerous amendments to the Constitution of India. When the Supreme Court in Keshavananda Bharati v State of Kerala placed on a check on the powers of Parliament to amend the Constitution, through the formulation of the Basic Structure Doctrine, which stated that the basic features of the Constitution cannot be defaced, the Government responded by disregarding the seniority of the judges who delivered the majority judgment and appointed Justice A.N Ray as the Chief Justice of India in 1973. In protest, senior judges of the Supreme Court, namely Justice J.M Shelat, Justice K.S Hegde and Justice A.N Grover resigned. Similarly, Justice Khanna delivered a dissenting opinion in the infamous ADM Jabalpur v Shiv Kant Shukla, during the heydays of the Emergency, reasoning that the declaration of Emergency does not deprive an individual’s fundamental right to seek judicial redressal through a writ of habeas corpus. When the Government reacted by appointing a judge junior to Justice Khanna to the post of Chief Justice, Khanna rightfully resigned from the Court. The unprecedented step of the four senior most Judges of the Supreme Court sans the Chief Justice, to inform the public about the sorry-state of affairs in the apex court, must be seen in light of the history of judges who have stood up for the integrity of the institution.

The Chief Justice of India is undoubtedly the head of the highest court of the land, however his primacy as the ‘Master of the Rolls’, does not empower him to act in an arbitrary manner. Article 124 of the Constitution which establishes the Supreme Court of India, does not recognize any superior judicial or administrative power to the Chief Justice of India, that is why he is recognized as primus inter pares, (the first among equals). His primacy in assigning cases is purely for administrative convenience and an element of discretion is necessary for the administration of any institution. However, it a fundamental principle of administrative law, that discretionary power must be exercised as per the rule of law, which is the very antithesis of arbitrariness. The law is not only derived through the arcana of case laws, but also through the practice of conventions. It is only just to demand that cases involving major consequences for the judiciary, be assigned to the senior most judges of the Supreme Court, as per the conventions of the institution. While there maybe no separate designation for the five senior most judges of the Court, it is important to keep in mind that the law recognizes the weightage carried by the senior most judges in light of the Second Judges Case in 1993 and the Third Judges case in 1998, which laid the foundation of the Supreme Court collegium.

Members of the bar can point out few instances which prima facie indicate the exercise of the Chief Justice’s discretionary power in the absence of basic objectivity, such as the assignment of the Aadhar case to a constitution bench, which excluded judges who had been hearing the matter extensively since 2013. However, the exclusion of the senior most judges in matters involving serious consequences for the judiciary, are blatantly evident. For instance, the arrest of retired High Court judge, Justice Quddushi, by the CBI for allegedly acting as a conduit for bribery in a case pending before the Supreme Court, led to the CJAR filing a petition seeking a special investigating body monitored by the Supreme Court to inquire into the matter, especially since the CBI lacks independence from the executive (as recognized by the Supreme Court itself). Such a serious matter involving integrity of the judiciary, should have been listed before the senior most judges of the Court, however it was assigned to a bench which did not include any member of the collegium, and the bench dismissed the petition. Similarly, the mysterious circumstances involving the death of Judge Loya, who died while hearing a fake-encounter case involving BJP President, Amit Shah, and the allegations that the judge was being pressurized to give Shah a clean chit, raises serious concerns. However, even this case was listed before a bench which did not consist of the senior most judges of the Supreme Court. At the same-time, to be fair to the present Chief Justice, even the former Chief Justice of India acted in a questionable manner when he assigned the Kalikho Pul suicide case (where a former Chief Minister alleged that judges of the Supreme Court had demanded bribes from him, in his suicide note), to a bench which did not consist of the senior most judges who were not mentioned in the note.

It would be improper to impute any questions on the personal integrity of the Chief Justice in the absence of cogent evidence, however the matter raised by the four judges are not related to the personal integrity of any individual, but regarding the institutional integrity of the Supreme Court. These judges are respected men of high integrity, they are not a group of dilettante persons seeking a putsch against the CJI, they clearly must have had compelling reasons to inform the public in the manner that they adopted. At the same time, the methods adopted by the judges leave much to be desired. In the press conference, they failed to spell out the hard facts as to the underlying cause behind their grievance. Their letter also failed to place the details regarding supposed arbitrary actions of the Chief Justice, opening a pandora’s box for vicious speculation. It took the prodding of a journalist for Justice Gogoi to confirm that they were upset about the administrative handling of the Judge Loya case, rather than being upfront about it. If the judges had taken a decision to discharge their duty to the nation, it is also their duty to discharge it completely, not just substantially. On the pointed question raised by Ms. Indira Jaising at the press conference as to whether they felt that the executive was interfering in the functioning of the judiciary, the judges neither confirmed nor denied it, which raises serious concerns.

The judges of the Supreme Court have taken an oath to uphold the Constitution of India, an environment of hostility and grievances within the Court may vitiate the discharge of this mandate. Therefore, it is imperative that the Chief Justice of India takes the initiative to find a consensus among the judges and to resolve the grievances raised by them. The credibility and the future of the Supreme Court and of the judiciary as a whole, now depends on it. Will the Chief now rise up to the occasion to settle the issues within the Supreme Court? Only time will tell.

Arvind Kurian Abraham, a lawyer based in New Delhi and the former Director of the Constitutional Law Society of NUJS, Kolkata.