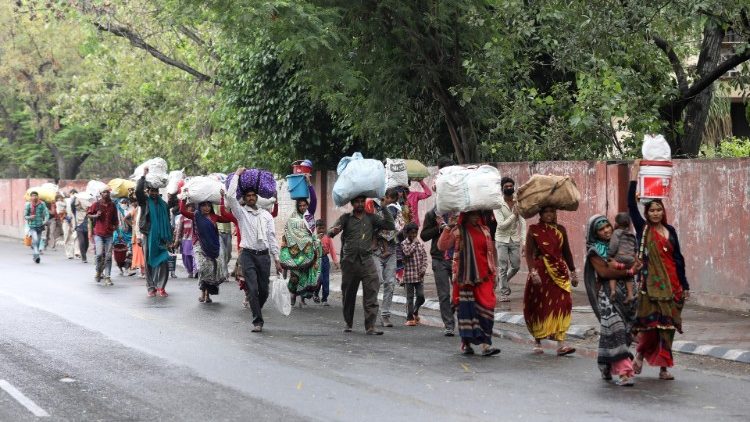 Labour and Employment Minister Santosh Kumar Gangwar told the Rajya Sabha that 17 migrant workers died in Maharashtra, and no deaths have been reported in 10 states and union territories. The Government has assured that the data on the remaining states will be made public soon, reports RHEA BINOY.

A total of 17 migrant workers lost their lives in Maharashtra after the implementation of the nationwide lockdown in March last year due to the COVID-19 pandemic, the government told the Rajya Sabha on Wednesday.

The government also said that no loss of lives of migrant workers was reported from Assam, Arunachal Pradesh, Delhi, Meghalaya, Himachal Pradesh, Punjab, Kerala, Nagaland, Manipur and Andaman, and the Nicobar Islands.

Labour and Employment Minister Santosh Kumar Gangwar in a written reply to a query by Shiv Sena MP Priyanka Chaturvedi and Congress MP Phulo Devi Netam, said, “No loss of lives of migrant workers were reported from Assam, Arunachal Pradesh, Delhi, Meghalaya, Himachal Pradesh, Punjab, Kerala, Nagaland, Manipur and Andaman and the Nicobar Islands except 17 accidental deaths in Maharashtra. Information from the remaining States and Union Territories are being collected and will be laid on the Table of the House.”

The data is in accordance with the migrant workers and their family members who died during and after the national lockdown between March to September.

“As per the information gathered, around one crore labourers had returned to their home states from their workplace States. Most of them now have gone back to work” Gangwar said in the Question Hour in Rajya Sabha.

According to data compiled in 2020 by the SafeLIFE Foundation, a road safety NGO, it was reported that 198 migrant workers were killed in road accidents during the lockdown. The report said that there were 1,461 accidents in the period of 25 March 2020 to 31 May 2020 – in which a total of 750 people died, including 198 migrant workers.

Also Read: SC issues a slew of interim directions ranging from no fare to be charged from migrant workers to their free of costs health screening and other facilities

The top states who reported the road crash deaths of the migrant workers were – Uttar Pradesh with 94 deaths, Madhya Pradesh with 38 deaths, Bihar with 16 deaths, followed by Telangana and Maharashtra with 11 and 9 deaths respectively. The report also mentions the main reasons for the road crash are fatigue among bus and truck drivers hired for transportation of the migrant workers, followed by speeding and poor construction of roads.

However, the NGO report maintains that the data has been compiled using “multi-source verification and media-tracking.”

Meanwhile, the government is planning to set up a portal for collecting information on gig, (a job that lasts a certain period of time, often the life of a project or as long as the company has that specific need. It can be short-term and specific in length, or long-term and lasting as long as the need continues.)building and construction workers by May – June, which would help in coming up with better health, food, and housing schemes for the migrant workers.