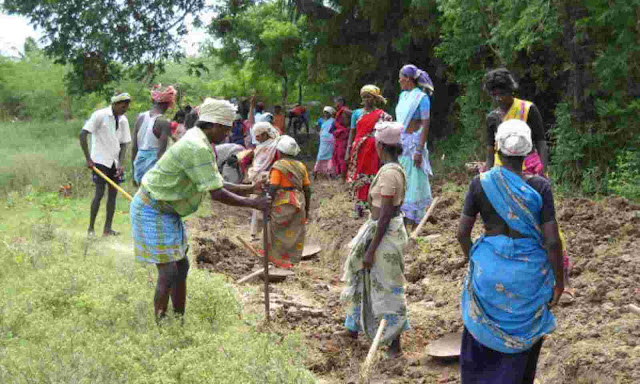 A recent study by LibTech India reveals inordinate delays of almost four weeks in wage payments to workers in Andhra Pradesh under the Mahatma Gandhi National Rural Employment Guarantee Act, as well as non-payment of the legally mandated compensation payment for delay in release of the payments, writes RAJIV SHAH.

A non-profit group consisting of engineers, social workers, and social scientists – calling themselves “liberation technology” enthusiasts – has, through a study, found that the union government takes, on an average, 26 days to complete wage transfers to Andhra Pradesh workers employed under the Mahatma Gandhi National Rural Employment Guarantee Act, 2005 (MGNREGA).

Suggesting that the phenomenon of delayed payments phenomenon is not just confined to the so-called Bimaru states like Jharkhand, Chhattisgarh and Bihar, a recent report by the non-profit, LibTech India, which is part of the Collaborative Research and Dissemination research group in New Delhi, reveals that the delay is a clear violation of Section 3(3) of the Act, under which MGNREGA workers are entitled to receive their wages within a fortnight of the date of closure of the muster roll.

The MGNREGA payment process broadly consists of two stages. In the first Stage, a Fund Transfer Order (FTO) is generated and digitally sent to the Centre, after the work is completed. The process of ensuring the generation of the FTO is the state government’s responsibility. The Centre, then, processes the FTOs, and transfers wages directly to the workers’ accounts. This is called Stage 2, which is entirely the Centre’s responsibility.

To provide a glimpse of the ground reality in Andhra Pradesh, LibTech India researchers targeted 1% of all panchayats (130 out of 12,956), and collected wage payment information for all job cards that appeared for work in the current fiscal year up to July 31, 2021, from an Andhra Pradesh government website.

Based on the data, they calculated the difference between the date of FTO generation (the transaction date, that is, the date on which the FTO is sent from the state to Centre) and the date of credit to see how long each transaction took in Stage 2 of the payment process.

“Out of 3.95 lakh downloaded transactions for which the FTO was sent to the Centre, 34% transactions were still unpaid as on August 10, 2021”, the report says, adding, “Thus, we analysed 2.58 lakh transactions which were paid across the 130 panchayats.”

The analysis of the data, according to the report, shows that “in the current financial year (FY), the Centre is taking an average of 26 days to process wage payments. Adding the average time taken during Stage 1, the total time taken to credit wages becomes 29 days, a gross violation of the Act, which states payments must be completed within 15 days.”

The calculations also show that “less than 20% of credited payments only have been completed within the stipulated 15-day time period so far this FY”, the report asserts, adding, “Nearly 3% of transactions have taken more than 2 months to get processed. For the transactions that are still pending, nearly half have experienced a delay of 30+ days already.”

Also read: UP: Reverse Migration of Workers Begin After Failing to Find Work Under MGNREGA

According to the report, “The Centre has taken more than thrice the time to process payments this year (25.82 days) as compared to last year (6.78 days). Last year, with the pandemic, the Centre was processing payments in less than seven days. However, this year with the second wave, the time taken is intolerably high.”

Considering the huge return of workers from urban to rural areas during the pandemic, the report says, the number of person-days generated between April and July has increased to 20.09 crore this year from 19.12 crore last year. “As the pandemic continues and demand for MGNREGA increases, timely payments are a priority”, it comments.

As for compensation for delayed payments, the corresponding legal provision, the report says, is “not calculated at all” either for Stage 1 or Stage 2. It adds, “Considering that most of the payments experience some amount of delay, it reveals that workers are not getting as much compensation as they are legally owed. Extrapolating the delay proportions for all of Andhra Pradesh, the actual compensation due will be Rs 26 crore for FY 21-22 (April-July), Rs 12 crore for FY 20-21, and Rs 36 crore for FY 19-20.”

“This non-acknowledgement and non-payment of delay compensation are in direct violation of the MGNREG Act, and of the Supreme Court order dated May 18, 2018, in the Swaraj Abhiyan vs. Union of India case, which stated that the Centre must calculate the delay and pay compensation to the workers for the full extent of delays (Stage 1 + Stage 2)”, the report underlines.

Under Schedule II, paragraph 29(1) of the Act, compensation should be paid at the rate of 0.05% of the unpaid wages per day in case the payment of wages is not made within 15 days from the date of closure of muster roll.