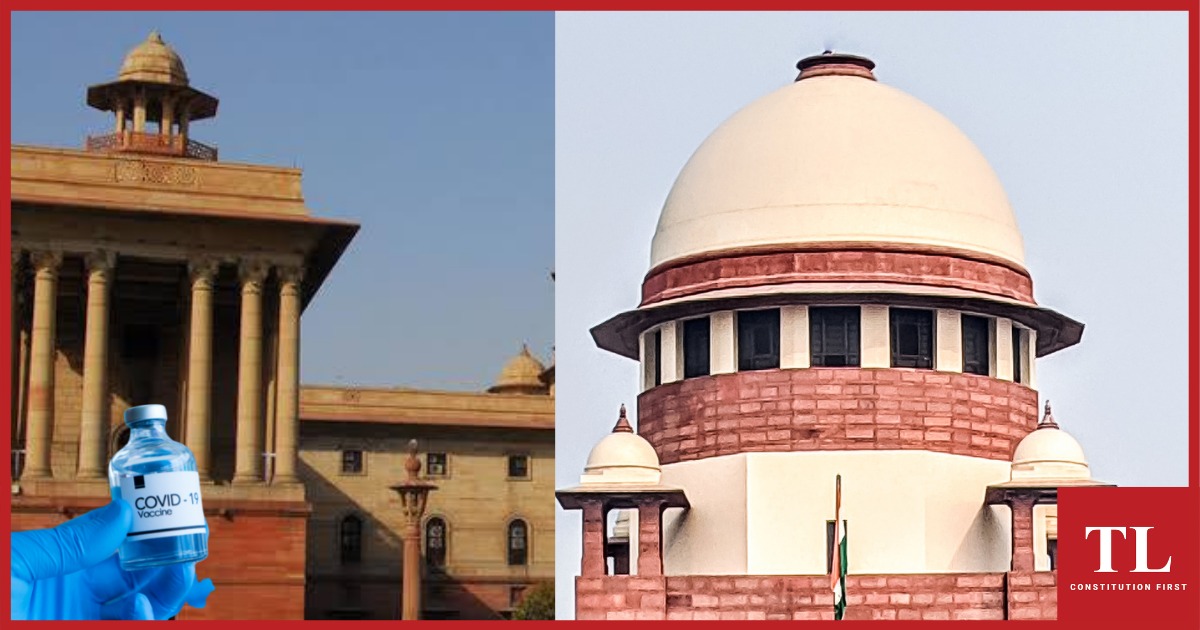 Centre defends its vaccine policy before the Supreme Court; asks it to trust the wisdom of the executive

THE Central Government has, by way of an affidavit in the Supreme Court, vociferously defended its new ‘Liberalized and Accelerated National COVID-19’ Vaccination Strategy that requires vaccine manufacturers to supply 50% of their monthly doses to the Centre and the remaining 50% doses to state governments and private hospitals. The vaccination of persons in the age group of 18 to 44 is allowed under this policy.

Though under the new vaccine strategy, it is for each state government to procure the vaccines, the Central Government has, by conducting informal consultations with the vaccine manufacturers, ensured that the prices of the vaccines are uniform for all the states to avoid any disparity resulting from one state buying vaccine at a higher price than the other, the affidavit has claimed.

All citizens in the age group 18-44 are getting free vaccination as all state governments have announced vaccination free of cost, says Centre in the Supreme Court#Vaccination #Covid19 pic.twitter.com/TK6KIvE8mO

It has also claimed that citizens of 18 to 44 years will be vaccinated free of cost as all the state governments have announced free vaccination for this population group.

Since this was the first time in its history that India was conducting its biggest vaccination drive, it has further claimed the country did not have the luxury of detailed planning time as when other vaccines were administrated in the past over decades.

Centre: In view of the unprecedented and peculiar circumstances under which #vaccination drive is devised as an executive policy, the wisdom of the executive should be trusted.#Covid19 pic.twitter.com/up1PPbfcxW

The Centre’s affidavit was filed after a bench of Justices DY Chandrachud, L Nageswara Rao and Ravindra Bhat expressed doubts over the constitutional validity of the Centre’s new vaccine policy. The court was of the view that once the vaccination programme had been opened up for persons other than the 45 plus age group, it would not be logical to impose on the state governments the obligation to source vaccinations for the 18-44 age group.

In its affidavit, the Centre has asked the court to trust the wisdom of the executive since it needs the discretion to formulate policy in “the larger interest in times of grave and unprecedented crisis”.

Centre says India is conducting its biggest #vaccination drive for which the country does not have the luxury of a detailed planning time like other vaccines administrated in past over a period of decades. pic.twitter.com/O7TCLmYUlQ

“In the context of a global pandemic, where the response and strategy of the nation are completely driven by expert medical and scientific opinion, there is even little room for judicial interference. Any overzealous, though well-meaning judicial intervention may lead to unforeseen and unintended consequences, in absence of any expert advice or administrative experience, leaving the doctors, scientists, experts and executive very little room to find innovative solutions on the go”, the affidavit states.

It adds that the Executive must have “some free play” given the access it has to all relevant information in consultation with all stakeholders and domain experts.

The apex court on April 30 sought to know from the Centre a breakup of the current and projected availability of vaccine stocks for the next six months. The Centre has now submitted that at present the availability of vaccines for the next six months would be difficult to project as it depends upon the successful augmentation in the existing production capacity of the two vaccine manufacturers, the procurement of other vaccines from other countries and its quantity etc.

These projections, the Centra says, however, require a dynamic change due to the very nature of the constraints.

On the last occasion, the Supreme Court had expressed apprehension that persons who do not have access to digital resources because of the mandatory requirement of registration over the Co-WIN digital portal for persons in the age group of 18-44 years, will deprive a large class of citizens of vaccination.

The Centre has informed the court that citizens who do not have access to digital resources can take help from family, friends, NGOs, and Common Service Centres (CSC), etc., for online registration in Co-WIN.

Grassroot level bodies have been successfully representing rural India in all state and Central Government schemes. “After the country entered the digital era, almost all these gram panchayats have established common service centres [“CSC”] which have a digital platform to be used by the people.

“These CSCs and their infrastructure is widely and effectively used in rural areas for various purposes and is found to be an effective module taking the development to the grass root levels. This provides access to the internet to a vast variety of persons who may not be adept in using it or may not have direct access to it”, the Centre has said.

The Centre has sought to justify its decision based on several administrative factors and for effective vaccine administration, saying the doses of vaccine are not unlimited, constraints of production capacities and permitting walk-in vaccination/registration could result in overcrowding at the vaccination centres, defeating the very purpose of vaccination.

“Any such overcrowding is effectively avoided due to online registration as different time slots are given in advance to each of the applicants after online registration to ensure that at any given point of time, crowding in the vaccination area is avoided”, the affidavit reads.

The Centre has claimed that the production capacity of the vaccines under the vaccination drive has been gradually ramped up and is expected to increase further in the next couple of months.

Sputnik-V is expected to increase production from 30 lakhs to 1.2 crore doses per month by July 2021.

It has claimed that the discussions for procurement of vaccines from out of India have been going on since the third quarter of 2020, at a time when foreign vaccine manufacturers were prioritizing their domestic requirements.

These negotiations, the Centre says, are a complex undertaking, currently ongoing on a war footing using all resources including diplomatic channels. Any discussion on this aspect is likely to be detrimental to these efforts being made by the Central Government in other countries.

The Centre has informed the court that financial support to Bharat Biotech International Ltd. (BBIL) and Serum Institute of India Pvt. Ltd. (SIIPL), for the production of Covaxin and Covishield respectively, in the form of advance payment [not support or investment] of Rs. 1732.50 crore was released to the Serum Institute of India (SII) for 11 crore doses of Covishield vaccine for May, June and July. Similarly, an advance payment of Rs. 787.50 crores was released to Bharat Biotech India Ltd (BBIL) for 5 crore Covaxin doses for May, June and July. The current procurement price of the Government of India is based on the price negotiated by the National Expert Group on Vaccine Administration for COVID 19.

It said no governmental aid, assistance or grant was made either for research or development of either Covaxin or Covishield. However, they were given some financial assistance for conducting clinical trials.