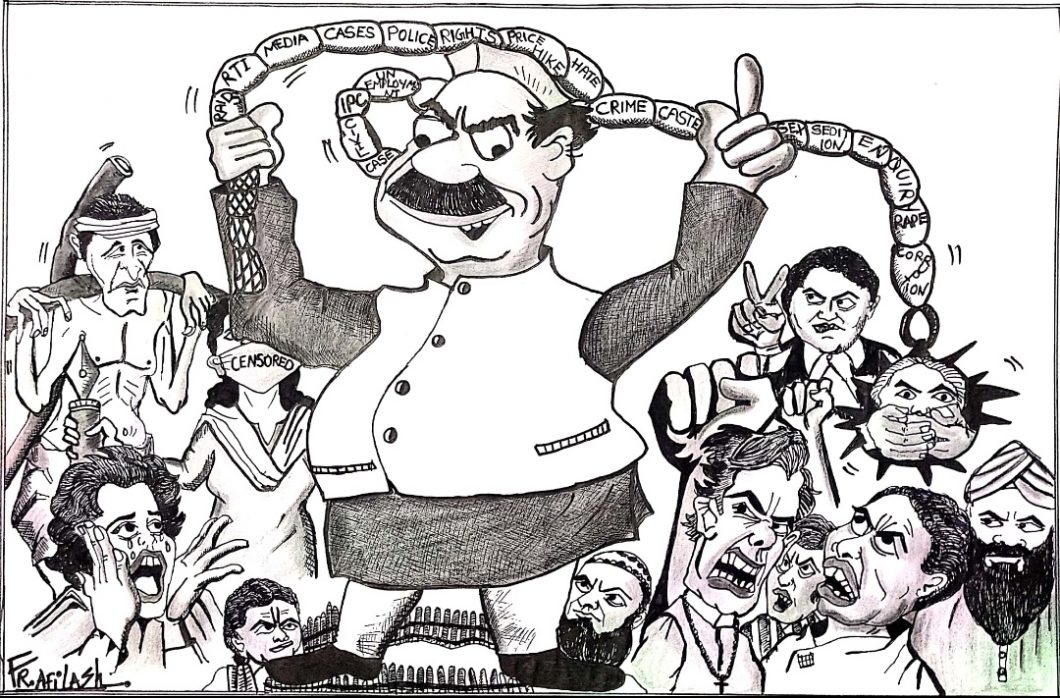 By remaining silent, we are guilty of complicity

Modern day India has witnessed multifarious instances of free speech being subjected to the shackles of tyrannical law. Individuals voicing legitimate concerns are dismissed, and those opposing the authority of the government are silenced. In the Great Indian Epic, questions are responded to by damnation while answers seldom surface.

Ever since we fought our way to independence from monarchs and arbitrary rulers in 1947, there have been several momentous changes. However, these changes might not be what we think. The biggest difference between the newly independent India and the one we live in today is the will power to challenge the status quo. While young India ached for justice and revolutions to safeguard the principles established by our forefathers, the cause is lost today.

As our nation ages, the impudence of the top brass seems to strengthen. It seems committed to weaken the grit of our fellow citizens. We witness those responsible for our welfare attempt to stifle our appetite for justice. This chronicle is set around the Indian democratic state, one that is being remodeled into an autocratic regime.

The Endless Cycle of State Supremacy and Dissent

The state has time and again failed the electorate, as it assembles a prison that incarcerates the advocates of dissent. Be it the colonial law of sedition that sanctions those who criticize the functioning of the ‘sovereign’ or the law of contempt that convicted Advocate Prashant Bhushan for his two tweets. The Legislature appears to be the genesis of the failure of justice in this Indian saga.

The legislature has concocted several laws, bestowing the government with seemingly limitless power to curb dissent and freedom of speech. A prime example is the Unlawful Activities (Prevention) Act, 1967 (UAPA). Primarily an anti-terrorism law intended to safeguard the sovereignty of the state, the legislation now transcends its boundaries to bring advocates of free speech under its radar.

When repressed voices and unheard stories of obliterated Kashmir threaten the clout of the government, it ceases to serve as the custodian of the electorate and only seeks to flatter its conceited saffron masters.

When Masrat Zahra, a photojournalist, attempted to bring to light the atrocities faced by the residents of Kashmir, she was booked under Section 13 of the UAPA for ‘unlawful activities’. The reason cited by the police for her arbitrary detention was of “causing disaffection against the country”. When repressed voices and unheard stories of obliterated Kashmir threaten the clout of the government, it ceases to serve as the custodian of the electorate and only seeks to flatter its conceited saffron masters.

These archaic laws have not seen any updation in over five decades. Such lacunas in the law, and an absence of rectification, consequently pave way for the protagonists of the next segment to bring despotism into fruition.

The government emerges as the flagbearer of oppression, breaking the dissenting spines of its subjects. Be it the jacquerie by students of the Delhi University against CAA, Amulya Leona’s allegedly ‘treacherous’ sloganeering, or the various dissenting schools of thought on the government’s communal and divisive Hindutva ideology, every instance has been met with hostility.

In Balwant Singh v. State of Punjab, the Hon’ble Supreme Court of India categorically held that sloganeering by itself cannot amount to sedition. The same court in Shreya Singhal v. Union of India also drew a line between ‘advocacy’ and ‘incitement’, and stated that only ‘incitement’ is indictable. However, the government has conveniently turned a blind eye to this.

This is similar to massaging the ego of a bully who has agreed to grant you a favour in return.

The executive seems to have birthed a new sense of authority in its mind, where its decisions must be adhered to and revered for what they are, lest you be sanctioned and labelled as Anti-National. The government has become a vigilante in its own cause that now coins new terms, defines what they mean, and then enforces them against the citizens under duress. When one is coerced to such propriety, they knock the doors of the judiciary, in a desperate attempt to rectify the erroneous.

Dissent is not anti-democratic

Gone are the days when Montesquieu’s separation of powers fueled the independence of the judiciary.

The disenchanting conviction of Prashant Bhushan has raised numerous questions and stirred many a debate. Section 12 of The Contempt of Courts Act, 1971, states that ‘the accused may be discharged or the punishment awarded may be remitted on apology being made to the satisfaction of the court’. This is similar to massaging the ego of a bully who has agreed to grant you a favour in return. Here, the favour is the bargain to eliminate sanctions on one’s right to question the guardians of our constitution, and the bully is the guardian itself.

The government has become a vigilante in its own cause that now coins new terms, defines what they mean, and then enforces them against the citizens under duress.

Justice D.Y. Chandrachud has previously stated, “The blanket labelling of dissent as anti-democratic strikes at the heart of our commitment to protect constitutional values and the promotion of deliberative democracy”. Yet, the Apex court appears to admit being fragile enough to be ‘scandalised’ by opposing views. It is unfathomable how the majesty of the Indian judiciary can be imperiled by an honest man’s tweet used to express disagreement.

It becomes imperative to note that this spell of the absolute power of the courts to force an apology out of disapproving individuals emanates from the wand of the legislature. The three protagonists of this Indian Epic are interdependent on each other, thereby creating a vicious cycle of state supremacy.

This sequence of suppression is what gives rise to dissent, which consequently fuels the engine for change. Throughout India’s tumultuous and far-reaching history, the tradition of questioning authority has moved the nation to consider it a necessity. At a time where the fourth pillar of democracy is being dismantled by the government, we must demand responsible journalism, one which lives up to the ideals of the constitutional right to be informed and initiate dialogue.

We must raise our voices to wake the unresponsive government from slumber. We must value the preamble of our constitution that gives power to “We the People”.

We must dissent, for if we were to remain silent, we’d be guilty of complicity.