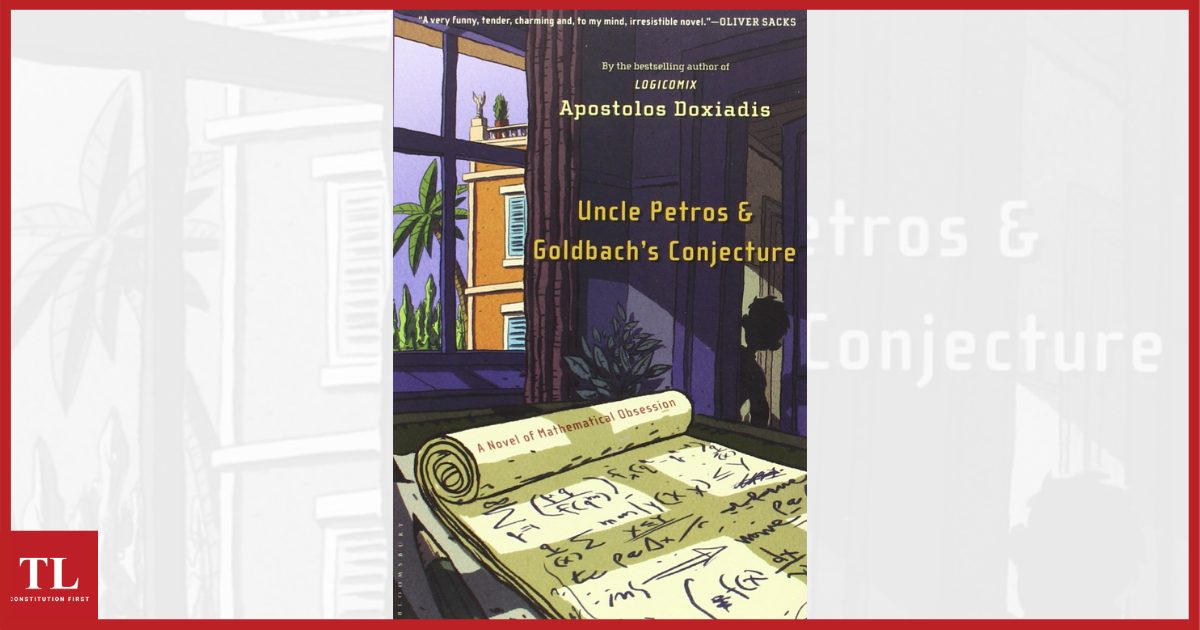 Reviewing the 1992 novel ‘Uncle Petros and Goldbach’s Conjecture’ by Greek writer Apostolos Doxiadis, JUSTICE YATINDRA SINGH writes about why the book, dealing with mathematical problems and the recent history of mathematics, is a compelling read and would be enjoyed by anyone.

Mathematics is the purest of all sciences and is the ultimate truth. It was rightly described in the Vedanga Jyotisha, one of the earliest known Indian texts on astronomy, written around 1350 BC, thus:

(“As the crest occupies the top position on a peacock and the jewel on a serpent; Mathematics is on top position among all the Vedangs and scriptures.”)

Uncle Petros and Goldbach’s Conjecture, an international bestseller by the Greek author Apostolos Doxiadis,  is about the romance of mathematics.

Christian Goldbach (March 18, 1690 – November 20, 1764) was an eighteenth-century German mathematician.  On 7th June 1742, he wrote a letter to fellow German mathematician Leonhard Euler postulating an interesting phenomenon regarding even numbers (a number divisible by two), without offering proof: it was his conjecture.

He postulated that any even number, greater than two, can always be written as a sum of two prime numbers, which are numbers that are divisible only by one and by themselves.  This is known as ‘Goldbach’s conjecture’. It is one of the oldest unanswered conjectures of number theory – it has neither been proved nor disproved till date.

The novel Uncle Petros and Goldbach’s Conjecture revolves around this theory. It was written in Greek in 1992, and translated into English and published by the independent publishing house Faber in 2000. Its publishers had, as a publicity stunt, announced a prize of a million dollars for anyone who could prove or disprove Goldbach’s Conjecture within two years of its publication. Needless to say, no one could claim the prize.

What the book is about

The book tells the story of a young man and his uncle Petros. Petros is a recluse: he likes to be left alone, does not meet anyone; and is considered a failure by his family. His nephew is educated in mathematics, and learns that his uncle, as a young man, was seen as a remarkable prodigy, as he became the youngest professor of mathematics, and used to be well respected by mathematicians as well as the larger community. It is puzzling for the nephew as to why Petros has come to be seen as a failure by the family, and he is curious to know about what led to his uncle’s fall from grace.  The story revolves around this mystery.

Petros is obsessed with proving Goldbach’s conjecture, and spends his lifetime unsuccessfully trying to definitively prove it.

The novel is fictional but in the course of the narrative, the author touches upon true incidents, events, and stories from the world of mathematics that makes it gripping. It is a fascinating read and provides thrills, even while dealing with an academic discipline like mathematics.

The novel also uses Gödel’s incompleteness theorems, but I am not going to reveal how those are used, and how the novel ends. I do not want to spoil your pleasure of reading the book.

Ramanujan’s cameo in the novel

This book is about the romance of numbers. When one talks about this love, how is it possible not to mention the greatest modern Indian mathematician, Srinivasa Ramanujan? Ramanujan also features in the novel, with the famous incident of the Hardy-Ramanujan taxicab number.

The English mathematician G.H. Hardy, who was Ramanujan’s mentor, had written his classic essay ‘A Mathematician’s Apology‘ in 1940, offering a defence of the pursuit of pure mathematics and its value, even if there is no immediate application.

The novel begins with the following quote from Hardy’s essay:

“Archimedes will be remembered when Aeschylus is forgotten, because languages die and mathematical ideas do not. ‘Immortality’ may be a silly word, but probably a mathematician has the best chance of whatever it may mean.”

Read the book, gift it to someone – you never know who may become the next Ramanujan, and end up being immortal.

(Justice Yatindra Singh is a former Chief Justice of the Chhattisgarh High Court, and a Senior Advocate. He has also served as Additional Advocate General of Uttar Pradesh. The views expressed are personal.)