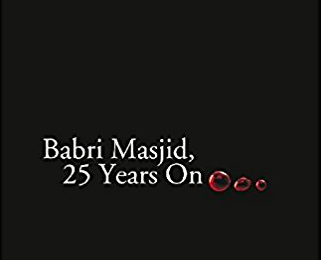 Through its personalised story-telling, the book stands as a memorabilia at the crossroads of politics and law, giving the gruesome chapter a human handle.

“So, how does one tell a story about history? Alternate history must be told, so that the ‘her-stories’ of the midwife, potter, mason are not lost amidst the valour of kings and swordsmen. Otherwise only the stories of the aggressors will remain where history does not record the life of the people who were quietly tending to fields, the peasants who lost the crops, the untouchable who was sacrificed before a well was dug.”

Babri Masjid: 25 Years On…, a collection of essays that was published as a special issue of the Indian Journal of Secularism, and has been edited by the formidable duo of Sammena Dalwai and Ramanathan, takes us through a variety of experiences that truly and poignantly capture the violence unleashed by one of the darkest chapters in the history of post-independent India – the demolition of Babri Masjid. The aim is quite clear from the outset. The goal is to individualise the history, which is currently tainted by rumours and political agendas. The book collects personalised accounts of a range of authors, while disassociating itself from the mainstream historical retelling of the incident and violence that surrounded it, accused of dehumanising one of the starkest episodes of 20th century political history.

By “humanising” and individuating what happened, the book hopes to bridge the gap between history and memory. This sentiment is aptly brought out in the poem by Agha Shahid Ali, where he says that “your history gets in the way of my memory” and “your memory gets in the way of my memory”. By combining experiences of individuals, who, during the demolition, were young journalists, young politicians or civilians who ended up joining the struggle against the “communalisation” of India, the memories of the violence are revived and the continuing impact is acknowledged.

However, is this book reopening cured wounds or has the violence caused during the demolition even stopped? Irfan Engineer in his essay argues that even though the nature of violence has changed, the effect remains the same. With cow vigilantism, love jihad, ghar wapsi, the “othering” still continues. Shaila Satpute asserts that what we see now is the poison tree growing from the seeds of hatred sown during the demolition of Babri Masjid. Time and again, it is argued and proven in the book that the demolition of Babri Masjid is a landmark incident in the history of Indian politics. The shift from caste-based politics to religion-based politics is evident. This trickles down to where you see an over-realisation of religious identities at every level of sociocultural existence. Hence, revisiting history and the reinterrogating the narratives become increasingly important.

By rewriting history by memories of victims, this collection of essays attempts to rewrite history as ‘people’s history’, wherein it is not about the politics that surround the resolution of the issue, but about the need to resurrect from it. Hence, rather than talking about which community was at fault, the narrative shifts to the wounds caused, hence furthering reconciliation.

The biggest success of the book is the diversity in the narratives provided. What is interesting is that while every individual essay shows a variety of impacts of December 6, 1992, they all add to the common narrative, which is of the experience of the non-participants during the riots, and the effects on their past, present and future.

The most unique account, in my opinion, was by Sudhanva Deshpande in his essay ‘Coming of Age During the Worst Eight Years of the Republic’. Deshpande shows the impact of the incident on someone who was ‘coming of age’ during this era and this led to the bipolarisation of India on the basis of communal identity. The experience of a 16-year-old living in Jawaharlal Nehru University during the Sikh riots in Delhi, who saw India in its worst years to come, is distinctive. The author takes us through his experience during the aftermath of the 1984 riots and the beginning of religious politics. This, combined with the Bhopal gas tragedy, Shah Bano judgement and its repercussions, Roop Kanwar’s sati and the passing of the Muslim Women (Protection of Rights on Divorce) Act, influenced the author’s political and social understanding. This piece specifically stands out, as it provides a wholesome understanding of the events that occurred around the demolition of Babri Masjid, which really helps in contextualising the incident.

The essays also capture the unique journey of women in such struggles. In her essay ‘Walking the Tightrope: Balancing Gender and Community’, Flavia Agnes talks about her reaching the “age of maturity” as a feminist by recognising the interplay of feminism and minority rights. We see women as perpetrators of violence, along with their roles as buffers and as peace-builders and finally their role as victims. Even housewives, who would generally abstain from political affiliations, were mobilised in Bombay by the Shiv Sena in the name of religion. With the “modesty” of women always being attacked, women in any role faced a double burden in the hands of the riots, which is brought up time and again in the essays.

In the book, we witness various retellings of the story. We see the experience of a journalist during the riot, including one who eventually becomes a witness in the special court set up to investigate into the matter. We also see the narratives of members of the drama community, who use their art as a form of protest. Apart from this, there are also instances of the horrors faced by various previously unheard communities such as Buddhist minority communities, Christian minority communities, non-Muslim spouses of Muslims during these bouts of violence, feminists etc.

Through the essays, we see the struggle of artists, the experience of journalists, the impact of social work and the power of education. Apart from narrating personal accounts of the demolition, the essays also talk about the societal impact of the demolition through experiences of neighbours, colleagues, friends, families and witnesses.

While Sudhanva Deshpande’s essay gives us a clear picture of the events surrounding the incident, the best narration of the actual occurrence of the incident on December 6, 1992 is provided by Pratap Asbe, in his essay ‘Witness No. 213’. Pratap Asbe was a reporter who was in Ayodhya from the preparation to the aftermath of the demolition. In this essay, he gives a daily account of the atmosphere in Ayodhya both before and after the demolition, where you could clearly see the organised operation in the political front in perpetration of the violence. This essay provides a first-hand account of incidents that occurred during the demolition, which clearly shows the politicisation of the issue and helps in seeing the entire havoc in a new light. The hollowness of the “martyrdom” of the top-level perpetrators of such violence is truly brought out in this essay.

One common conclusion you can draw from every essay is that as a consequence of the entire episode, we see over identification with the communal being, and this is not just among the minorities. This has been brought out in two ways in the essays. The first way in which this is reiterated throughout the book is by association of majoritarian sentiment with the use of various symbols. Apart from the evident mobilisation of crowds in the name of religion to destroy Babri Masjid, painting the streets orange, conducting grand aartis, tikas, laddoos during the demolition and after marked the rising extremism amongst the Hindus.

Another interesting symbol was the bindi and how, as a child growing up in such unrest, its value and significance change. The bindi in the essay by Manaswani Lata Ravindra is shown as a symbol which caused an internal dilemma between protection of oneself and one’s own beliefs as her mother had to chose between her personal value system and self-preservation by the use of her bindi as a sign of “belongingness” to a particular community.

The second way this is brought out is by repeated instances of realisation of one’s communal identity, as a result of a sense of “unbelongingness” or “othering” towards the minority communities. For instance, in the essay ‘How It Feels to be a Muslim in India’, Shafaat Khan talks about how despite always living in non-Muslim colonies and constantly travelling as a child, the sense of being ‘different’ was something that stayed. The author says that the nature of the riot was different, and this was no secret. He shows how he used drama to conceal his Muslim identity as a means of acceptance. In his essay, he talks about the unique struggle of a playwright as a consequence of this “othering” in not only succeeding in the mainstream, but also doing so while narrating your own battles.

The biggest win of the book is its personalised story-telling narrative. Through this, the book stands as a memorabilia by linking the politics and the legal battle to an individual’s life’s struggle. The book is divided into three parts: scribes, artists and activists. All three parts highlight something distinct from the others. This amalgamation of personal account is done uniquely. While talking about an extremely dark period of history, the writing style manages to connect with the readers through sarcasm, humour, rhetoric and emotion.

This book rehumanises the event by taking you through the lived experience of the riot through the eyes of its direct victims. In light of the reawakening of the issue in the courts, this book redefines the perspective of the riot, which has been a struggle between myths and facts. It provides a neutral, uncensored narration of one of the most politically and socially significant incident of our generation.

The statement that really stood out in the book was one in the introduction essay by Sameena Dalwai and Ramu Ramanathan, that no one can be sure what stood at Ayodhya once upon a time, but what was destroyed on 6 December was definitely a mosque. Where the ashes on the mosque laid, the prayers commenced. And what occurred after that became a paragraph in Indian history.

The book shows how individual experiences influences societal well-being and mutual cohabitation. Childhoods were stolen, happy-endings became myths and the nature of minority politics was changed with the fall of the Babri Masjid. The narratives show that the demolition in Ayodhya was a one-of-a-kind violence. But what is lost in the narratives is violence, both physical and social, that continues for years after. The bitterness and the poison, which was released with each strike on the masjid, taint India till date.