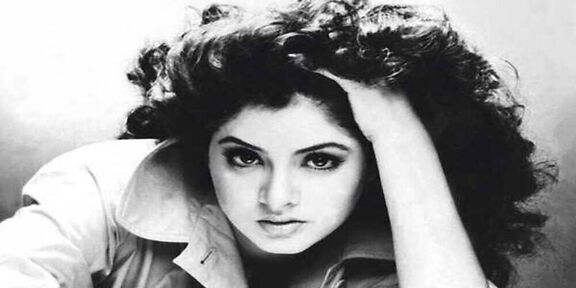 1993. Czechoslovakia had completed its ‘Velvet Divorce’ this year and split into two independent countries, the Czech Republic and Slovakia. Bill Clinton and Jiang Zemin assumed Presidencies of the United States of America and China respectively. Bombay was still recovering from the horrific serial bomb blasts of March 12, 1993, in which 260 people lost their lives. India had not yet witnessed mobile, satellite TV and internet revolutions. M N Venkatachaliah had already assumed office as the 25th Chief Justice of India and ball was set rolling for the pronouncement of the ‘Second Judges Case’ later that year, which gave primacy to the Chief Justice of India in appointments to the higher judiciary. Mohd Azharuddin was the captain of the Indian cricket team, leading India to a first-ever 3-0 “brown wash” in a Test series against the visiting Englishmen.

The word ‘Corona’ evoked memories of a pale lager and not of a global pandemic.

April 5, 1993. Late evening, on this day, the residents of ‘Tulsi Apartments’ at Versova, Andheri (West) Bombay were rudely jolted by something that seemed to have fallen from the heavens into their parking space. That something was actually someone – the precociously talented teenage Bollywood Film Actress Divya Bharti, who “fell” from the 5th floor of her residential apartment and died on the way to the hospital due to brain haemorrhage and excessive blood loss. A ghastly way to end any life, let alone that of a talented 19-year-old teenage actress. 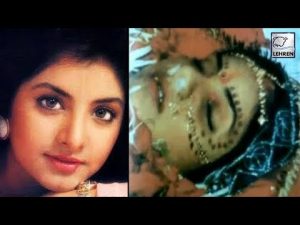 The official version is that the fall was a result of an accident, though there are several theories and rumours still abound her untimely death. But for the purposes of this piece, it suffices to know that had fate not so cruelly and catastrophically intervened, Divya Bharti would have had a terrific career in ‘Bollywood’. Her death irrevocably altered the course of several films and careers in that decade.

The 1974 born actress was barely 16 when she made her debut in a Telugu superhit movie ‘Bobbili Raja’ (1990). In a brief but luminescent career of merely three and a half years, she appeared in 22 films across three languages – Hindi, Telugu and Tamil, half of which were commercial successes. A remarkable ratio, by any yardstick, for one so young.

Her Bollywood debut took place in 1992, a year in which she had a jaw-dropping 10 movie releases, several of whom were lasting hits. Her first Hindi movie was the multi-starrer ‘Vishwatma’ where she “Saat Samundar”-ed her way into public consciousness. (Even today, there is hardly a wedding in North India, especially in Uttar Pradesh, where this song is not blared out at marriage receptions. The Millennials and Gen Z, however, are blissfully unaware of the provenance of this song and assume that it must be some traditional wedding song!!!). 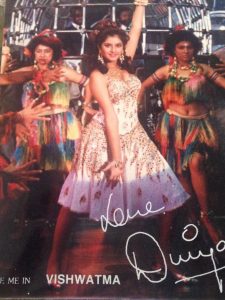 Super-hits ‘Shola aur Shabnam’ with Govinda and ‘Deewana’ with Rishi Kapoor and a certain Shahrukh Khan (on debut) followed. The pairings of Shahrukh-Kajol and Govinda-Karishma Kapoor gave several hits in the 1990s. One cannot help but wonder if Divya Bharti were alive, would she be the “Simran” of Dilwale Dulhaniya Le Jayenge (DDLJ) or “Anjali” of Kuch Kuch Hota Hain? Would Govinda be cavorting with her, instead of Karishma, in those monster slapstick comedy hits that the combination of Govinda-David Dhawan-Kader Khan churned out in the 1990s? 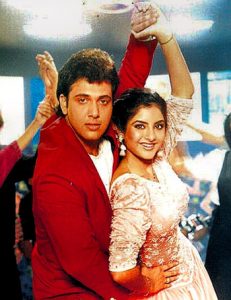 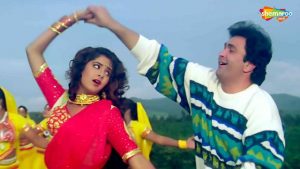 Later that year, she was the lead star of Hema Malini’s directorial debut ‘Dil Aashna Hai’ where she has paired once again opposite Shahrukh Khan. It was widely felt, that Divya Bharti was a sole bright spark in an otherwise drab and dreary film (The film’s tanking did not sufficiently deter Hema Malini, who went on to direct one more movie – the eminently forgettable ‘Mohini’ (1995) starring her niece Madhoo. However, since then, she has graciously spared the viewers of any more of her directorial treats). 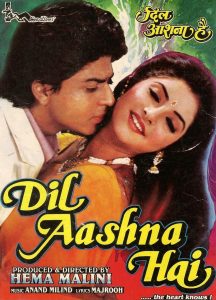 For someone who was not from a “filmy” background, Divya Bharti had an assured natural presence before the camera. She was never overshadowed by her co-stars even when the male lead had the meatier role to play, which invariably was the case then and still is.

She was adept at all the skills demanded from a typical Bollywood heroine in the 1990s viz over-the-top emoting, dramaturgic dialogue delivery and ready dancing skills. She was as much at ease with debutantes like Shahrukh Khan (‘Deewana’) or Suniel Shetty (‘Balwaan’) as she was with older co-stars like Govinda, Sunny Deol, Sanjay Dutt and a much older co-star – Rishi Kapoor, ‘Deewana’ (1992), in the resplendent glory of his XXL sweaters and pullovers

She shot for several films at the same time, in multiple shifts. Yet she did not appear jaded and did full justice to her part.

Please don’t get me wrong here. Divya Bharti’s oeuvre was not something that would win her film a Golden Lion at the Venice Film Festival or the Palme d’Or at the Cannes. Her films were mainstream commercial cinema of the ‘masala entertainment’ variety, certainly not the genre of a ‘Pather Panchali’ from Satyajit Ray. But the fact that this untrained teenage actress lent a rare grace and gravitas, even to the outlandish films that she starred in, makes her work commendable and memorable. Hence, I believe it would have been Divya Bharti and not Kajol or Karishma that would have succeeded Madhuri Dixit as the numero uno female super-star in the latter part of the 1990s. She would have won a clutch of National and Filmfare Awards. By now (2020), she would have secured her place in Bollywood’s cinematic history, as one of the top 5 best actresses of all time. But all this is in the realm of “If”. Sadly, we will never know.