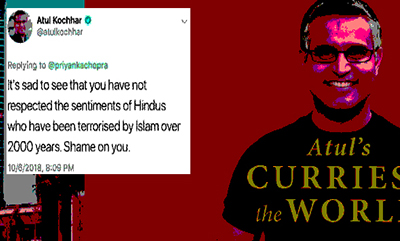 Bigotry boomerangs: Atul Kochar may face up to five years in prison as per Dubai law

Atul Kochhar, the twice Michelin-starred chef, who claims to have “changed the way people perceive and experience Indian cuisine”, tried to offer more than a taste of India to his international customers this time. Though much adored and feted widely, his food aficionados were definitely not ready to pay for his bigotry and Islamophobia, when he tweeted to actor Priyanka Chopra on Sunday, “It is sad to see that you have not respected the sentiments of Hindus who have been terrorised by Islam over 2000 years. Shame on you.”

This was in response to Priyanka Chopra ’s apology for an episode of the series Quantico where she uncovers a terror plot by Hindu nationalists.

I’m extremely saddened and sorry that some sentiments have been hurt by a recent episode of Quantico. That was not and would never be my intention. I sincerely apologise. I’m a proud Indian and that will never change.

Atul Kochhar, who ran the globally acclaimed Rang Mahal restaurant in the Dubai JW Marriott Marquis hotel and several other restaurants in United Kingdom, has now been duly sacked by the swanky, five-star hotel, that didn’t want to rub its rich Muslim customers, mostly the residents of the United Arab Emirates, the wrong way.

JW Marriott Marquis Dubai terminated the chef’s contract at Rang Mahal. Bill Keffer, general manager of the hotel, said in an emailed statement to the tabloid Gulf News, “Following the recent comments made by Chef Atul Kochhar, we have taken the decision to end our agreement with him for Rang Mahal. With the termination of our agreement, Chef Atul will no longer be associated with the restaurant.”

Earlier JW Marriott Marquis Dubai had tweeted, distancing themselves from Kochar’s public utterance: “We are aware of the comments made by Chef Atul Kochhar. We would like to stress that we do not share the same views as stated in the remark, nor is it a representation of the culture of diversity and inclusion that we pride ourselves on at the hotel.”

We are aware of the comments made by Chef Atul Kochhar. We would like to stress that we do not share the same views as stated in the remark, nor is it a representation of the culture of diversity and inclusion that we pride ourselves on at the hotel.

The Twitterati were quick to respond:

“I won’t be eating at @Benaresofficial after reading the racist tweet by @atulkochhar towards Muslims. Yet they serve Halal meat so I guess he is happy taking the money of Muslims but just not happy with Muslims!”

Many people tagged the the Dubai Police and JW Marriott Marquis Dubai to take action against the chef.

@atulkochhar says “Hindu terrorized by Islam for 2000 years”
This tweet is full of hate nd insult against Muslims. This man fueling the communal violence against Muslims In India nd most imp part is He own Restaurant in #Dubai which is Islamic country. @DubaiPoliceHQ
1/2 pic.twitter.com/WtYelR0XNx

It is this normalisation of hate which is letting this celebrity chef get away with using such vile, provocative language against a community. @JWDubaiMarquis when you host iftaar evenings at marriott dubai, is this the spirit you celebrate ? pic.twitter.com/Cp7NY9htev

Five years in jail, penalty up to 2 million dirhams

The United Arab Emirates has very strict laws on social media and anti-discrimination found to be spreading sectarian hate or racism. They are criminal offence and can lead to prosecution. Dubai court had ordered deportation and a fine of Dh250,000 on an Indian man accused of defaming a prominent jewellery group on social media with a false image with an intention of hurting the jewellery group.

“Any person who commits any of the following acts shall be sentenced for the crime of blasphemy:

“Any person, who commits any of the acts set forth in Clauses (2, 3, 5) of Article (4) of the present Decree Law by any means of expression or by any other form or means, shall be sentenced to imprisonment for a period not less than five years and to a fine not less than 250,000 dirhams and not exceeding one million dirhams or either one of these two penalties.”

“Any person, who commits any of the acts set forth in Clauses (1, 4) of Article (4) of this Decree Law by any means of expression or by any other form or means shall be sentenced to imprisonment for a period not less than five years and to a fine not less than 250,000 dirhams and not exceeding two million dirhams.”

Realising the severity of the post, that could lead to him not only losing his job (as he already has), but also face deportation, Kochhar deleted the previous tweet and posted an “apology” on Twitter.

There is no justification for my tweet, a major error made in the heat of the moment on Sunday.  I fully recognise my inaccuracies that Islam was founded around 1,400 years ago and I sincerely apologise.  I am not Islamophobic, I deeply regret my comments that have offended many.

However, the Twitterati were quick to call out his double standards and hollow face-saver of an apology in no time.

Courage to apologise when your bigotry can cost you a livelihood! Huge difference between being a hypocrite and courageous. Courage would be to stand by what he said against all consequences

When I saw your tweet, I didn’t even notice 2000, I noticed dehumanizing bigotry against an already marginalized community in India, but your apology focused on 2000 Vs 1400 semantics pic.twitter.com/mEAVwvW2fC