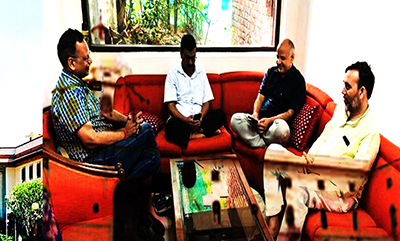 [dropcap]T[/dropcap]he Supreme Court verdict resolving the tussle between the Delhi’s Lt. Governor and the elected legislature has held the LG to be bound by the “aid and advice” of the government of the National Capital Territory of Delhi in all matters except those pertaining to land, police and public order. This constitutional bench judgment has been met with reactions from dignitaries across the political and legal realm of the nation.

Delhi Chief Misnister and the Aam Aadmi Pary National Convenor, Arvind Kejriwal, who has been at the heart of this dispute, termed the judgment a “big victory” for Delhi’s populace and democracy.

He followed it up by announcing a cabinet meeting to discuss schemes that had been stalled so far.

Called a meeting of all Cabinet Ministers at 4 pm at my residence to discuss critical projects of public importance which were blocked so far.

Delhi Deputy CM Manish Sisodia also praised the judgment for upholding democratic values. He thanked the Court for enabling the duly elected legislature to work for the people of Delhi without running files past the LG’s office, and granting it the authority transfer government officials and bureaucrats.

Other AAP leaders such as Gopal Rai, Sanjay Singh and Raghav Chadha, the party’s national spokesperson, also commended the Court for upholding and reiterating the significance of democracy by adjudicating in favour of the elected government.

Government of Delhi has been restored.

Democracy in Delhi has been restored.

Democratic rights of people of Delhi have been restored.

Reactionaries from the Indian National Congress (INC) include Ajay Maken and former Delhi CM Sheila Dikshit. Dikshit said that the judgment provides “clarity” and merely reiterates the roles of the two authorities as per the constitutional scheme. “I think what the SC has said is very clear. As per Article 239 (AA) of the Constitution, Delhi is not a state, it is a Union Territory. If the state government and L-G don’t work together, then Delhi will face problems,” she said, as reported by ANI.

I think what SC has said is very clear. As per Article 239 (AA) of the Constitution, Delhi is not a state,it is a UT.If Delhi Govt&LG don't work together then Delhi will face problems. Congress ruled Delhi for 15 years, no conflict took place then: Sheila Dikshit, Former Delhi CM pic.twitter.com/UhRLmovOKN

Maken, currently the President of Delhi Congress, urged the AAP government to hereon “focus on governance and development of Delhi” in light of the verdict.

Now, since the Apex Court has clarified about the powers in Delhi-

We hope that the development which has been stalled, ever since the Congress was voted out of power, 4 yrs ago-will start again

LG and CM, stop this blame-game and develop Delhi as we successfully did for 15yrs!

At the other end of the political spectrum, Subramanian Swamy, Rajya Sabha MP of the BJP, acknowledged the verdict’s veracity but highlighted the LG’s authority to intervene if “anti-national security or anti constitutional decision” are taken by the Delhi Cabinet.

Yes what SC said is correct that LG must respect Delhi cabinet decisions, but if any anti national security or anti constitutional decision is taken,which they are capable of taking, as they are Naxalite type people, then LG can oppose: Subramanian Swamy,BJP MP pic.twitter.com/5fdKJ0KueU

BJP’s National Spokesperson Sambit Patra said: “Mr Kejriwal should contemplate governance instead of publicity stunts”. He added that the verdict serves as a detriment to the AAP government as the Court held police and law and order to fall under the ambit of the LG’s office.

BJP Spokesperson Nalin Kohli, linked this issue with AAP’s demand for complete statehood. He came down heavily upon AAP for claiming the verdict to be “victory” for their party. Kohli said, “Don’t understand how Delhi govt is claiming this to be a victory? Their main plank was that this is a state whereas Court has unequivocally said its not a state. They said they had exclusive executive control that was rejected too. This is a UT, Centre has a role to play.” However, it must be noted that the ambit of the current case was solely the distribution of power between the elected government of Delhi and the LG, and while full statehood is a running campaign of the AAP, it had almost nothing to do with the particular case of GNCT versus Union of India, in which the judgment has been pronounced today.

Don't understand how Delhi govt is claiming this to be a victory?Their main plank was that this is a state whereas Court has unequivocally said its not a state.They said they had exclusive executive control that was rejected too.This is a UT,Centre has a role to play:N Kohli, BJP pic.twitter.com/RwR9EYlVM4

The verdict also elicited reactions from a range of legal luminaries too.

Senior advocate Indira Jaising lauded the judgement as a “victory” of the “people of Delhi and the spirit of the Constitution”. She termed the verdict as an exemplary demonstration of a constitutional courts functioning, with the five judges reinforcing “democratic rights” and the “people’s sovereignty”.

The victory today belongs to the people of Delhi and the spirit of the Constitution. This is how a true constitutional court functions. All five of them rose to the occasion and reinforced our democratic rights. People are sovereign,they said.

Eminent jurist and former former Attorney General of India, Soli Sorabjee also commended the judgment and urged the Delhi Government and the LG to give up their confrontational demeanour and “work harmoniously”.

Its a good verdict by Supreme Court. LG and Delhi Govt have to work harmoniously,can't always have confrontation. Daily squabbles are not good for democracy. I welcome the decision: Soli Sorabjee,former Attorney General of India pic.twitter.com/pmeMyoNUnR

Senior advocate Mohan Katarki, too, praised the pronouncement. Speaking to The Leaflet, he said, “A brilliant intellectual work by the Bench in Delhi matter. However, I still think, the Union and its agent provocateur LG would misuse proviso to Clause 4 of Art 239AA. The word ‘routine’ in conclusions VIII extracted below is not sufficient to control the LG. Some guidelines were required here which are missing. ‘VIII. The power given in proviso to sub-clause (4) to LG is not to be exercised in a routine manner rather it is to be exercised by the LG on valid reasons after due consideration, when it becomes necessary to safeguard the interest of the Union Territory’.”