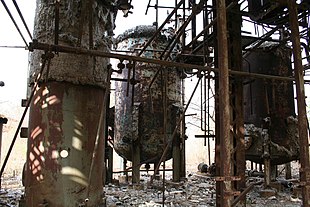 Here is further evidence pointing to the health hazards posed by Union Carbide’s defunct pesticide plant in Bhopal. N. D. Jayaprakash, Co-convener of the Bhopal Gas Peedith Sangharsh Sahayog Samiti (BGPSSS), implores the Madhya Pradesh government and the Centre to urgently decommission the plant. This is part 2 of a series on a tragedy that shook the entire world.  Thousands of victims are still paying for it even after 36 years.

It is of utmost concern that the defunct pesticide plant of Union Carbide India Ltd (UCIL) in Bhopal is being allowed to contaminate surrounding areas with toxic substances. There is now enough evidence and data to establish the scale and extent of the health-damage being perpetrated by the manufacturing facility that was shut down following the 1984 gas leak, which claimed thousands of lives.

In fact, the government must treat the pleas of various social organisations, health experts and environmentalists as an SOS call from the population residing in areas adjoining the plant to urgently decommission it.

While the preliminary Greenpeace report in 1999 gave an overview of the problem, more focused studies have been carried out by the Delhi-based voluntary organisation Srishti and the Peoples’ Science Institute (PSI), Dehradun. The objective of the Srishti study, commissioned by the ‘Fact-Finding Mission on Bhopal’, was to examine the movement of chemical pollutants from one level to another through the food chain.

As part of the survey, samples of soil and groundwater from near the UCIL factory were collected in 1999-2000 and analysed at the Facility of Ecological and Analytical Testing (FEAT) laboratory of IIT, Kanpur. The report of the study conducted by Srishti, Surviving Bhopal: Toxic Present-Toxic Future, was released in January 2002.

It successfully recorded the movement of chemicals — used extensively in the UCIL factory — in the environment from one medium to another. It also revealed the bioaccumulation of toxicants from one level to another of the food chain. The results showed glaring evidence of contamination near the factory. Soil, groundwater, vegetables grown in the area, and even human breast milk investigated were found to be contaminated with toxic chemicals and heavy metals.

The Report noted: “Another very significant aspect is that the human breast milk showed maximum concentration for VOCs [volatile organic compounds] and higher concentration of the pesticide HCH [hexachlorocyclohexane also known as benzene hexachloride or BHC]. It is evident that these carcinogenic toxics are bio-concentrated in the milk. Hence this poses a serious concern to infants, as it is the easiest and shortest route of exposure to a number of these suspected carcinogenic chemicals.”

The study clearly indicated that the UCIL factory is the source of the chemical contamination since most of the chemicals used in the factory are still present in the factory and its adjoining areas. Further, there are no other chemical industries that use the chemicals mentioned in the inventory within a 3-5 km radius from the factory. The Srishti study also made the pertinent observation that “exposure to chemical pollutants and heavy metals show multiple effects that include fever, diarrhoea, respiratory and nervous disorders and cancer.”

The study undertaken between September 2001 and April 2002 for the Bhopal Gas Peedith Mahila Udyog Sanghathan (BGPMUS) by PSI, Dehradun, was to analyse the concentration of Mercury in groundwater near the former UCIL plant.  Groundwater samples were collected from seven hand-pumps and seven tube-wells in residential areas. Samples were also collected from the Solar Evaporation Ponds in the factory and an open well. The samples were analysed at the PSI laboratory.

The PSI study confirmed the presence of toxic levels of Mercury in the samples. Exposure to high levels of Mercury can cause permanent damage to the brain and kidneys. Drawing upon the conclusions arrived by the Agency for Toxic Substances and Disease Registry of the United States Public Health System, the PSI study stated that: “Mercury may affect many different areas in the brain and their associated functions, resulting in a variety of symptoms. These include personality changes (irritability, shyness, nervousness), tremors, changes in vision (constriction or narrowing of the visual field), deafness, muscle incoordination, loss of sensation, and difficulties with memory.”

The PSI study rightly concluded that: “The present situation in Bhopal results from a classical combination of corporate irresponsibility and governmental indifference. The problem of groundwater contamination at Bhopal compounds the miseries of the population already affected permanently due to the exposure to toxic MIC (methyl isocyanate) gas (in 1984).”

Legal Proceedings in the United States

Both Srishti and PSI were in broad agreement with the remedial plan suggested in the earlier study by Greenpeace. In this context, it must be pointed out that the organisations representing the victims maintain the view that the financial responsibility for any clean-up operation must be borne exclusively by the UCC and its current owners, Dow Chemicals, USA. A civil suit for fixing financial responsibility was filed before the New York Southern District Court on November 15, 1999, by the victims’ organisations with the aid of groups supporting the cause of the Bhopal victims in the US.

Both UCC (Union Carbide Corporation) USA, and Warren Anderson (Chairperson and CEO of UCC at the time of the Bhopal Gas Tragedy) were served notice and compelled to appear in court as respondents. In the process, UCC had to submit documents that shed light on major decisions regarding the dumping of toxic waste at UCI’s Bhopal plant. While the District Court dismissed the petition in August 2000, the United States Court of Appeals for the Second Circuit returned the case to the District Court on November 15, 2001, directing it to consider the case afresh.

However, on March 18, 2003, the New York Southern District Court dismissed the amended petition yet again forcing the victims’ groups to go in for another appeal. Thankfully, in its March 24, 2004, order, the Appeals Court  noted: “…the District Court should be free to revisit its dismissal of the claim for plant-site remediation in the event that the Indian government or the State of Madhya Pradesh seeks to intervene in the action or otherwise urges the court to order such relief.”

After pressure was exerted on the Madhya Pradesh government and the Central government, the former informed the Government of India on June 7, 2004 that it had no objection to the clean-up and site remediation. The Central government agreed to submit a “no objection” letter to the New York District Court, which it did on June 27, 2004. However, the matter did not make much progress as the U.S. Courts of Appeals finally dismissed the petition on August 10, 2006. A fresh petition was filed in the name of Janki Bai Sahu, a survivor of the 1984 tragedy, which too was dismissed in June 2012. Subsequently, the US Courts of Appeals also dismissed the appeal against the District Court’s order. A separate petition filed in the name of Jagarnath Sahu was also dismissed on 24 May 2016.

Meanwhile, a writ petition (WP No.2802 of 2004) was filed before the Madhya Pradesh High Court in Jabalpur on July 23, 2004 to expedite the clean-up of the contaminated site in Bhopal. Three organisations –Bhopal Gas Peedith Sangharsh Sahayog Samiti (BGPSSS), the Bhopal Group for Information and Action (BGIA) and the Bhopal Gas Peedith Mahila Udyog Sanghathan (BGPMUS) — were interveners in the matter. Subsequently, the Union of India filed a curative petition (No.345-347 of 2010) before the Supreme Court against the Bhopal Settlement Order of February 1989. The petition included a claim for compensation from Dow Inc to remediate the contaminated site in Bhopal.

While matters were embroiled in various courts, new studies further confirmed the threat posed by the UCIL plant in Bhopal.  In addition to its earlier study, Greenpeace carried out another in 2002.  Its findings had this revelation:

“Local populations are vulnerable to exposure to all the chemicals found in this study through routes such as direct contact with contaminated soil or inhalation of contaminated dust. The HCH [hexachlorocyclohexane] and other organochlorines may moreover be passed on in the milk of cattle that the locals graze on the site. Many local residents are already suffering the after-effects of exposure to the gas release…Further chemical exposure from the SEPs and the stockpiles is unacceptable.”

In addition, the National Environmental Engineering Research Institute (NEERI), Nagpur, and the National Geophysical Research Institute (NGRI), Hyderabad, carried out a joint study in 2010. The preliminary findings of the study showed that “The total volume of contaminated soil (within and outside UCIL premises) is estimated to be 6,50,000 m. Assuming a bulk density of 1.7 gm/cc of soil, the total quantum of contaminated soil requiring remediation amounts to 11,00,000 MT.”

The NEERI/NGRI report highlighted the magnitude of soil contamination. This prompted the Chairman of the Bhopal Environmental Remediation Oversight Committee and the Minister of State, Ministry of Environment and Forests, to invite comments from the Bhopal survivors’ organisations. On July 9, 2010, a critical review of the NEERI/NGRI reports was prepared and submitted to the Government. It had the following key recommendations:

Unfortunately, for the last ten years, there has been no further progress other than the holding of a preliminary workshop in Delhi on April 25-26, 2013 hosted by the Centre for Environment & Science (CSE) in which most stakeholders (except the Madhya Pradesh government) participated for working out an action plan for remediating the contaminated site at Bhopal.

Fresh attempts are being made to prevail upon the Union Ministry of Chemicals and Fertilisers as well as the Prime Minister’s Office to take immediate steps to convene a meeting of all stakeholders. It must include the governments at the Centre and Madhya Pradesh state, the United Nations Environment Programme, international and Indian scientific organisations, representatives of the chemical industry and concerned voluntary organisations. An action plan has to be urgently chalked out to remediate the contaminated site in and around the UCIL plant in a time-bound manner.

(N D Jayaprakash is co-convener of the Bhopal Gas Peedith Sangharsh Sahayog Samiti (BGPSSS), an organisation working for the rights of the victims of the 1984 Bhopal Gas Tragedy. Views are personal.)