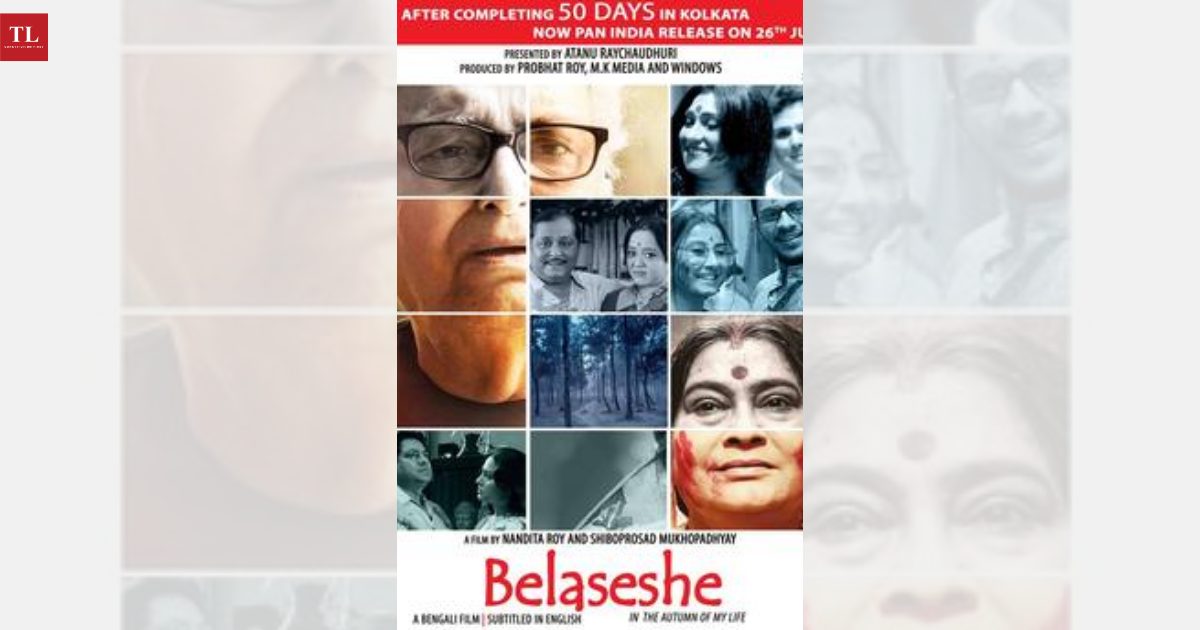 Belaseshe: Through a Socio-Legal Lens

Reviewing the celebrated Bengali film ‘Belaseshe’, DIPTODIP DUTTA dwells on the legal and social implications of the film, especially its treatment of the concept of ‘irretrievable breakdown of marriage’.

‘BELASESHE’ is a 2015 Bengali film written and directed jointly by Nandita Roy and Shiboprosad Mukherjee. The movie represents Bengali middle-class life in a very authentic way. The film revolves around an old couple who have completed 49 years of marriage, and their children are married as well.

The interesting nuance of the movie is that despite the marriage being peaceful, there being no dispute or any form of hostility between the couple, and no mistreatment of one party by the other, the husband demands a divorce from his wife for the abstract reason of being independent and care-free. This is followed by court proceedings and a short family vacation, after which they separate informally.

In the end, it turns out that he wanted his wife to become independent but through the movie, viewers notice that he is actually the dependent one, especially when he returns to his wife after four months of informal separation.

The movie also contrasts the marriages of their children along the journey of separation and reunion of the central couple.

This film review explores the concept of ‘irretrievable breakdown of marriage’ as depicted in the film, and contrasts it with the jurisprudence built by the judiciary along with other allied legal aspects and provisions relating to the matter. It will then critically examine the social aspects of the movie from a feminist perspective, and point out the patriarchal notions which have been reinforced through it.

The portrayal of divorce vs. legal reality

The film notably explores the concept of ‘irretrievable breakdown of marriage’ between the two spouses.

Divorce claimed by either of the parties to the marriage can be claimed under Section 13(a) of the Hindu Marriage Act, 1955 (HMA). The statutory grounds for divorce under this provision are:

Also read: Power of court to direct restitution of conjugal rights: Challenge to constitutional validity of sections of Hindu Marriage Act, Special Marriage Act to be heard by SC July 22

From the statutory provision itself, it is evident that the husband in this particular movie committed the legal fallacy of filing a divorce petition directly under this section. It would have been easier for him to obtain a divorce decree if he filed a petition for judicial separation and then, after living separately from his wife for a period of one year, he could have filed for a divorce on these grounds, as irretrievable breakdown for marriage is not a ground for divorce in itself, given the situation at hand.

A certain class of jurisprudence in this regard would work in favour of the husband if he sought a divorce after filing the RCR petition and then living separately from the wife. Even if the wife contends that divorce should not be granted on the grounds that the husband did not allow her to resume normal matrimonial life as is the case in the movie, after the RCR decree would have been passed, it would not go in her favour.

This is because a three-judge division bench of the Punjab and Haryana High Court had held in 1976 that mere disinclination to accept an offer of reconciliation, mere compliance or reluctance to comply with a decree of RCR does not amount to wrong under section 23(1a) of HMA.

As the Supreme Court decided in another judgment in 1977, the non-compliance has to be in the form of an active and grave act in order to amount to a wrong.

Another nuance of the provision is the statutory period of one year or upwards which has to be considered while granting the decree for divorce. It gets tricky when an appeal is filed after the trial court has passed an order of judicial separation; however, a two-judge division bench of the Calcutta High Court held in 1985 that the period of RCR or judicial separation begins after the trial court has passed a decree even if a further appeal is filed by one of the parties to the proceedings.

Also read: ‘Restitution of conjugal rights’ is an archaic, unconstitutional law and its time is up

The general test that courts consider when hearing a petition filed on grounds of ‘irretrievable breakdown of marriage’ is whether a marriage has broken down beyond repair. The Supreme Court admitted, in its landmark judgment in the case of Naveen Kohli vs. Neelu Kohli (AIR 2006 SC 1675) that when there has been a long period of continuous separation, due to which the marriage has broken down beyond repair it would be harmful to the parties and the society at large to uphold such a marriage. The apex court also admitted in this case that the fault grounds are proving to be inadequate to deal with the problems of this nature.

The judge in the movie did not grant a divorce; he asked them about the intimacies or the lack thereof in their marriage, following which they were asked to go on a short vacation. The probable rationale of the judge not granting divorce under this provision could be gauged through a judgement of the Supreme Court from 2011 wherein it was held:

“Matrimonial matters are matters of delicate human and emotional relationship. It demands mutual trust, regard, respect, love and affection with sufficient place for reasonable adjustments with the spouse. … Therefore, it would not be appropriate to apply any submission of irretrievably broken marriage as a straight jacket formula for grant of relief of divorce.”

It seems that the judge in the movie thought along similar lines.

In case if the wife files for divorce in the movie’s scenario on the grounds of desertion, the same would not succeed as the wife had consented to the action of the husband who wanted to live separately. Desertion cannot be claimed by a party to a marriage when there was consent on the part of the party to live separately, as decided by the Allahabad High Court in a 1982 judgment.

The best possible solution in the present case would be filing for mutual divorce under Section 13-B of HMA in case both want a divorce from each other.

Feminist critique of certain elements of the film

The directors of the movie also try to portray the beauty of co-operation in marriage, and how a marriage cannot be functional without the man and the women performing their ‘respective roles’. However, in an attempt to do so the director reinforces the patriarchal notion of gender roles and gender binaries.

The portrayal of the woman being attached to the domestic realm and the man exploring the outer realm reinforces the “inner-outer world” binary created by patriarchal social forces. This is a nuance that has been studied by political scientist Partha Chatterjee in considerable depth in the context of colonial India. The creation of this binary has also been well explored in one of celebrated film director Satyajit Ray’s movies, ‘Ghare-Baire‘.

The wife has been portrayed to be helpless and dependent on the husband, which is a conservative social idea promoted by the patriarchal super-structure. A juxtaposition has been made between the wife and her sister who is shown as a lawyer. However, the latter was presented in a comical way in the movie as she tries to adhere to professionalism while discussing the case with the former; this alludes to the patriarchal tendency of confining women to the domestic realm.

Overall, despite being non-progressive, this film is a good watch, given its quality of direction and the depth of performance on the part of its actresses and actors. However, we see that to claim divorce on the basis of irretrievable breakdown of marriage, there has to be some physical manifestation such as non-compliance of RCR, non-performance of conjugal responsibilities, or some other acts which amounts to a fault. However, its applicability is not limited to fault grounds. Thus, the Indian jurisprudence on this ground prioritizes the institution of marriage over individual autonomy.