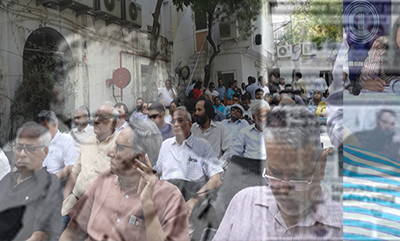 Days after Shujaat Bhukari, the editor-in-chief of Rising Kashmir, was assassinated, many local dailies in Kashmir collectively decided to leave the editorial sections blank in protest, sending a strong message that they would not cower in fear. Bukhari was gunned down on June 14, 2018, hours after the United Nations Office of the High Commissioner for Human Rights released its first-ever report on human rights violations in Jammu and Kashmir and Pakistan-occupied Kashmir.

Kashmiri media sends a strong message that it will not cower in fear: Daily newspapers have collectively decided to leave the editorial pages blank in protest of the murder of Shujaat Bukhari. #kashmir #ShujaatBhukari pic.twitter.com/wJkbHCcsmE

Senior journalists who have been friends with Shujaat Bhukari assembled at the Press Club of India in New Delhi on June 18 to remember him. As Gautam Lahiri, the president of the Press Club of India, put it: “We do not call it a condolence meeting but a solidarity meeting. It is the need of the hour. To my mind, he was a peace volunteer, a peace activist.” All speakers remembered Bukhari as not only a voice of rationality in Kashmir that “spoke truth to the power” and was never “afraid of asking the difficult question”, but also a peace activist who endeavored towards building peace in the conflicted state of Kashmir by creating dialogue between New Delhi -Islamabad and New Delhi-Srinagar.

In an interview in 2015 with the DNA, Bukhari had said: “Do you think I am safe here? Nobody is. To ensure safety, one needs to do broader work. One has to create an atmosphere of peace and normality here. This can only happen if India engages with Pakistan. When the peace process existed from 2003 to 2008, there was visible change on the ground. When you talk to Pakistan and the people of Jammu and Kashmir, there is a favourable atmosphere. But on one hand, you do not engage with Pakistan because they are ‘rogue’ and you also refuse to talk to any alienated section in Kashmir, including Hurriyat, because they too are ‘rogue and Pakistani agents’. Without engaging with them, the state will continue to be hostile.”

Senior journalists in the meet spoke about how Kashmir is a “landmine” and a “mosaic of conflicting ideologies”. Having any subjective opinion on a matter would be in conflict with one ideology or the other.  Many political forces outside Kashmir are benefitting from this conflict, the gathering echoed. Amit Baruah, resident editor at The Hindu, said, “The tragedy of Kashmir and the assassination of Shujaat are inextricably linked”.

On June 19, when Bharatiya Janta Party (BJP) ended its alliance with Peoples’ Democratic Party (PDP) in Jammu and Kashmir leading to the Governor’s rule in the state, ironically, pitied Bhukari’s death as one of the reasons for the split. This is a stark reminder that his death too has become a rallying point for partisan politics.

Reminding about the deteriorating conditions in Kashmir, Baruah said, “We know the dangers of actually living there (Kashmir) and reporting from there is thousand times greater than those who go and come back. It’s a sad commentary that we were not able to protect him…we will never know who actually killed him.”

In a piece written by Shujaat Bukhari, published on May 18 in Rising Kashmir and republished in Indian Express, the journalist welcomed the unexpected announcement of ceasefire by Rajnath Singh, the Union Home Minister for the holy month of Ramzan. He said that it was a glimmer of hope for many Kashmiris who were tired of the violence. Few days after his assassination, MHA ended the ceasefire. Rajnath Singh tweeted:

On 17th May 2018, GoI took the decision that Security Forces will not conduct offensive operations in J&K during the holy month of Ramzan. This decision was taken in the interests of the peace loving people of J&K, in order to provide them a conducive atmosphere to observe Ramzan

The Security Forces are being directed to take all necessary actions as earlier to prevent terrorists from launching attacks and indulging in violence and killings.

This decision has been widely appreciated by the people all over the country, including J&K, and has brought relief to the common citizens.

It is important that all sections of peace loving people come together to isolate the terrorists and motivate those who have been misguided to return to the path of peace.

Many pointed towards the surmounting pressure on journalists from various sides, especially in conflict zones where not succumbing to it could decide freedom from imprisonment and in some cases, life from death. Nidhi Razdan, the executive editor at NDTV, reminded everyone how name-calling and tagging journalists as “anti-national”, among others, can have serious consequences. Siddharth Varadarajan, the founding editor of The Wire, said, “long before Shujaat was assassinated his character was assassinated in social media”.

Reminding the responsibility of mainland journalist, Bashir Asad, Bukhari’s friend from Kashmir said: “I would only say that if the entire media fraternity in the mainland has any sympathy towards us, then you should certainly be very vocal is supporting us, in building some kind of peace in Kashmir… whenever we try to get people from New Delhi…very few turn up.”

A senior journalist from the Kashmir Times said that most of his journalist friends in Kashmir were feeling destitute. Questions loom on “what will we write, what will happen tomorrow, will we survive.” He said that mere survival of honest journalism and peace activism in Kashmir is a question in front of them. Pointing towards the senior journalists present in the gathering, he concluded: “those people need your help who are talking about peace and prosperity in Kashmir, those honest journalists”.

Everyone congratulated the employees at Rising Kashmir, who despite the assassination of their editor-in-chief Shujaat Bukhari, was able to come out with a terrific edition, paying a tribute to him and sending a message that Rising Kashmir would continue to do what Bukhari started. Abdul from Rising Kashmir who worked with Bukhari for the last two years stressed how not only was he a great journalist, but also a good human being. He never censored any of his reporters.

Journalists like Shujaat Bukhari and many more have become mere collaterals in the current narrative of Kashmir. Fear looms over Kashmir. With the governor’s rule, will the use of muscle power increase in Kashmir, making the situation from bad to worse. Senior journalists who have reported from Kashmir and by extension of their reporting in Kashmir have been friends with Shujaat feel the void he has left behind. As Amit Barauah puts it, the biggest tribute to him would be for the journalists to do their work with grit and diligence and “to speak truth to the power”.