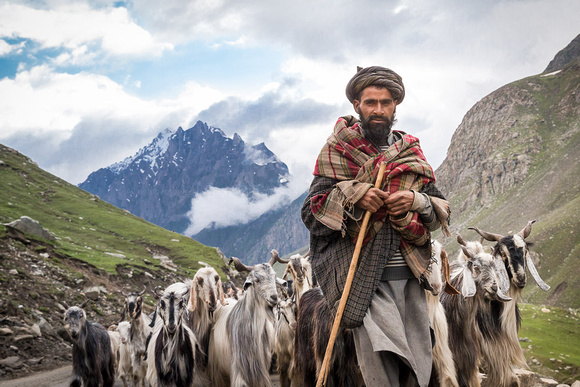 The FRA has been applied to Jammu and Kashmir. This law entitles the Bakerwals to get grazing rights in Ladakh as well. Will local authorities allow this, considering Ladakh is now a separate administrative unit, asks RAJA MUZAFFAR BHAT.

BAKERWALS and Chopans are traditional pastoral-nomadic communities that live in Jammu and Kashmir. Before 1990, when there was no armed militancy in the region, they would travel through the length and breadth of Jammu and Kashmir, exploring the summer pastures and meadows to graze their sheep and goats.

Due to heavy military presence on the border areas of North Kashmir and parts of Poonch and Rajouri of Jammu Division from 1990 onwards, several traditional travel routes and meadows became inaccessible to these communities. Now the erstwhile state of Jammu and Kashmir has been carved into two Union Territories (UTs) post the abrogation of Article 370.

This summer, these pastoralist communities may have to suffer once again as there are apprehensions about whether they would be able to move freely inside the Ladakh region. The Bakerwals regularly visit pastures in Ladakh in search of fodder and grasslands.

On the other hand, the Forest Rights Act (FRA) 2006, which was inapplicable on Jammu and Kashmir in the past, has been implemented in the newly carved out regions. This gives these communities some legal protection to travel and graze their flock. Of course, it will depend upon whether the local administration of Ladakh allows it.

The Bakerwals are a Gujjar-Muslim community, designated a Scheduled Tribe (ST) in 1991 by the central government. The word Bakerwal, in Gojri language, means goat-keeper or shepherd. It is a tiny community that traces its origin to Kalakot, Nowshehra, Thanamandi, and other adjoining areas of the Rajouri district.

Some Bakerwal people are also found in parts of the Poonch district, especially in Mendhar and Surankot. Several Bakerwal families have settled around the hills of the Jammu district. They speak Gojri and own sheep and goat, from a few dozen to the hundreds.

“In the winter, Bakerwal families mostly move around their native villages in Rajouri and Poonch. Five to ten percent families, which do not have a permanent home, move around Akhnoor and other areas of Jammu district. These areas do not get snowfall and so fodder is available in winter,” says Abdul Qayoom, a Ph.D. scholar from Rajouri who belongs to the Bakerwal community.

Soon after the onset of summer, when the snow starts to melt and mountain passes are thrown open, the Bakerwals cross the mighty Pir Panjaal pass (3,485 metres) via Pir ki Gali, which bifurcates Kashmir from the Jammu region.

Some cross this range through minor passes such as Choti Gali, Noorpour Gali, and Jamia Gali. This takes more than a month, depending on the weather to reach pastures in the Pir Panjal range. Many move to Sonamarg, Gurez, Pahalgam, Kishtwar, and other places. In the north, east, west, and south of Kashmir valley, Bakerwals can be found in almost every meadow during the summer.

After the onset of militancy and subsequent increase in military concentration, several pastures were closed due to security concerns. This made traditional grazing lands out of bounds for the Bakerwals and other shepherds, so many started turning toward grasslands in Gurez, Tulail, Dras, or Zanskar, where only a handful of shepherds would normally go

Bakerwals use the traditional Mughal Road to travel into Kashmir. In recent years, this road became motorable, so some Bakerwals load their cattle on trucks and move with their families towards their destinations. The goats and sheep, however, are still taken on the age-old routes through cliffs and mountain passes.

Bakerwals would go to several locations in the Kupwara or Gurez sector near the Line of Control (LoC) in large numbers before 1990 as very high-quality green fodder is available there. After the onset of militancy and subsequent increase in military concentration, several pastures were closed due to security concerns.

This made traditional grazing lands out of bounds for the Bakerwals and other shepherds, so many started turning toward grasslands in Gurez, Tulail, Dras, or Zanskar, where only a handful of shepherds would normally go. Some meadows are located at very high altitudes around the Ladakh region.

The Mughal emperor Jahangir, who ruled from 1605 to 1627, visited Kashmir several times over these routes. He died near the Pir Panjal pass while returning to Lahore in the fall of 1627. The Jammu and Kashmir government has connected the Kashmir valley with the Jammu region via the Pir Panjal through a road link way back in 2005-06. It is this road that is still known as Mughal Road.

The Chopan, also known as Pohul in Kashmiri, live a laborious life. This pastoralist community usually owns no livestock, unlike the Bakerwals. They take care of sheep that belong to local farmers. It is not uncommon to see Chopan shepherds dotted across the hilly rangelands of Jammu and Kashmir. In the summer, they negotiate the treacherous mountains to reach the alpine meadows, also called “bahaks”.

In bahaks, Chopan shepherds graze sheep from June until autumn. The farmers pay them Rs. 350 to Rs. 400 per sheep to look after them for a season that lasts five to six months. Some Chopans, who have grazing land around their villages, continue the activity until November.

Some cross this range through minor passes such as Choti Gali, Noorpour Gali, and Jamia Gali. This takes more than a month, depending on the weather to reach pastures in the Pir Panjal range. Many move to Sonamarg, Gurez, Pahalgam, Kishtwar, and other places.

The Chopan community is socially, educationally, and economically underdeveloped. Despite being pastoral and tribal, they are not included in the ST category by the central government. The Kashmiri Chopan is similar to the Changpa community of Ladakh or Gaddis of Himachal Pradesh and Uttarakhand. Only the Changpas and Gaddis are recognised as a Scheduled Tribe.

The Jammu and Kashmir Legislative Assembly, in 2000, passed a resolution to include the Chopan community in the list of tribes, but the Centre never took it seriously. Recently, this author met with Lieutenant Governor Manoj Sinha to bring this to his notice. He assured me he would take up the issue with the government.

After four years of suspended animation, the Union Ministry of Tribal Affairs (MoTA) brought back the Model Guidelines for the conservation, management, and sustainable use of community forest resources under the FRA. In February last year, a committee headed by NC Saxena, a former member of the Planning Commission and the National Advisory Council (NAC) was asked to examine and recommend these guidelines under FRA.

This made traditional grazing lands out of bounds for the Bakerwals and other shepherds, so many started turning toward grasslands in Gurez, Tulail, Dras, or Zanskar, where only a handful of shepherds would normally go. Some meadows are located at very high altitudes around the Ladakh region.

The CFR empowers Gram Sabhas to conserve and manage forests. Section 3(1)(i), Gram Sabhas get the rights to protect, regenerate, conserve or manage any community forest resource that they have been traditionally protecting and conserving.

The MoTA also created two more committees, headed by former secretary Hrusikesh Panda, one to look into the recognition and vesting process of the habitat rights of Particularly Vulnerable Tribal Groups (PVTGs) and the second to submit a report on seasonal resource access to nomadic and pastoralist communities, including the Chopan.

The Bakerwals and Chopans lead very tough lives. Many have no means to buy durable tents, so they often shelter under trees or tarpaulin or polythene sheets when it rains en route to the highland pastures. As they are not recognised as farmers, they are not entitled to government subsidies. Farmers get subsidies for pump sets, spray pumps, gen-sets, etc., but there is nothing for the shepherds like Chopans or even Bakerwals.

Every year, pasturelands experience heavy snowfall on the higher altitudes. Their hutments of wooden logs, rocks, and mud get damaged; some even collapse. These poor shepherds are not even allowed to repair their mud and log huts, which they call kothas—is this not injustice?

“I slept in an ordinary tent for three months last summer as forest officials did not allow me to repair my kotha at Ayud pastureland in the Doodh Ganga forest range of Budgam. Those who bribed officials could repair their huts, but I could not afford it. Still, I am sure I would be able to repair the damage this summer,” Abdul Rashid Chopan, a Kashmiri shepherd, told The Leaflet.

Many illegal Kothas have come up in the last four to five years in several meadows in the Pir Panjal forest division. Recently, the forest department in a written response to an RTI request, said there are 736 registered kothas in the Doodh Ganga forest range, but locals allege there are many more illegal constructions. Many came up during the COVID-19 pandemic and earlier, during the 2019 summer lockdown.

Under the FRA, the newly-constructed kothas can be “regularised” through illegal means by forest officials. This is a challenge that needs to be addressed. The Census report of the kothas needs to be made public before settling any claims to rights over them. Else the Rashid Chopans will be left out again, while the blue-eyed folks, who do not even need these huts, will get their illegal kothas regularised.

Every year, Bakerwals would have skirmishes with the local shepherds of Ladakh, particularly in the Zanskar area. With the FRA enacted in Jammu and Kashmir, the question arises, will authorities in the Union Territory of Ladakh allow Bakerwals from Rajouri to visit meadows in Ladakh, which is now a separate political-administrative entity carved out of the erstwhile state of Jammu and Kashmir.

On the other hand, the Forest Rights Act (FRA) 2006, which was inapplicable on Jammu and Kashmir in the past, has been implemented in the newly carved out regions. This gives these communities some legal protection to travel and graze their flock. Of course, it will depend upon whether the local administration of Ladakh allows it.

The meadows in Zanskar are visited by Bakerwals via Padar in the Kishtwar district. In the past, the shepherds and others would disallow Bakerwals into the Zanskar Valley. On several occasions, there were clashes as well over this issue. Many cases have been registered in local police stations due to these fights.

However, section 3(1)(d) of the FRA says community rights of use or entitlements such as to fishing locations and other products of water-bodies, grazing (settled or transhumant), and traditional seasonal access to the resources of the nomadic-pastoralists are recognised for individuals and communities. This is a big challenge that authorities in both Union Territories will need to tackle amicably.

(Raja Muzaffar Bhat is a Srinagar-based columnist and activist and founder-chairman of the Jammu and Kashmir RTI Movement. The views expressed are personal.)