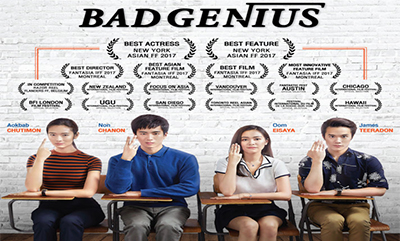 [dropcap]B[/dropcap]ad Genius (Chalard Game Goeng), released in 2017, is a milestone in new Thai cinema. It is the highest grossing Thai film on the international market so far and it won the award for Best Film at the New York Asian Film Festival in 2017. It is a smash-hit in Thailand too. The Thai new wave cuts across the arts. It expresses the increasingly global sensibility of Thai generations born after Thailand became an upper-middle income economy. Bad Genius was produced by GDH 559, an independent production company.  Nattawut Poonpiriya, the director, is very young himself, only 35-years-old.

Thai cinema today is one of the fastest growing and most internationally renowned film industries in the region, not just in terms of creativity but also as business. Traditional genres such as epics, melodramas and horror films, which has always been a staple of Thai cinema, have given way to independent cinema. At the same time Thailand’s production and post-production companies offer state of the art services to an increasing number of international films, television series, commercials and video games.

Bad Genius is topical and deals with endemic cheating in Thai education. But generically it is a heist thriller. In this it is typical of new trends in Thai cinema which treat contemporary issues from different angles, through a variety of genres. Poonpiriya himself is an aficionado of Hollywood thrillers from the 1970s and the film is taut and tense with nail biting moments. The heart of the film is a cheating operation, mounted by Lynn, who is no more than a 17-year-old schoolgirl. It is timed down to the last minute, with teams of students operating sequentially till things go wrong, as they must. Lynn is the bad genius, the adolescent anti-hero. It is difficult role to play. Chutimon Chuengcharoensuking, a newcomer, does it masterfully. She won the Rising Star award at the New York Asian film festival.

The film is based on a 2014 real-life incident. Cheating, apparently, has evolved to the level of organised crime in East Asia. Large-scale cheating operations are regularly mounted, in particular, during SAT exams. In 2014, test prep companies, called cram schools in China, Korea and Thailand, sent “hired hands” to sit for the exam in Australia as it is in a time zone ahead of them. These students memorised questions and texted them during break-time to cram school instructors who solved and relayed them to students just in time for their exams. The scam was discovered and the scores of those caught were cancelled. They were also debarred from retaking the exam. This hasn’t been a deterrent as cheating during SAT positively flourishes till date.

Thailand’s rise to middle income status in the space of a single generation is one of the biggest economic success stories of recent times. The current generation was born at a time of rapid change. This is reflected in Thai cinema at all levels

This modus operandi is almost exactly replicated in the film. Lynn is a poor scholarship student at an elite school. She is supported in the mounting of the operation by Pat and Grace who are rich. Bank, on scholarship too, is an unwilling recruit. Bad Genius has a social dimension to it which lends it substance.

Thailand’s rise to middle income status in the space of a single generation is one of the biggest economic success stories of recent times. The current generation was born at a time of rapid change. This is reflected in Thai cinema at all levels. The business model has changed and the treatment and choice of subjects reflect a society in transition. The culture of cheating in Bad Genius can be viewed, in this perspective, as enabling social mobility and finding a place in a globalizing economy where competition is fierce. In China, Tiger parents and their cub kids are now social types. Ambitious parents pay cram schools up to an unbelievable USD 10,000 for answers to the SAT test. The extent of the rot is such that in 2016, the test was cancelled across Korea. In the same year, a scandal rivalling fiction unfolded in Singapore. Test takers wore flesh-colored ear pieces connected to a blue tooth device in their clothing through which they received answers. Similarly, in Thailand, students, during a medical entrance exam, were found wearing glasses with concealed cameras which shot videos of the question paper. The images were relayed to a “problem solving team” which messaged the answers to electronic wrist watches also worn by the students.

According to research, Thai youth today is prone to risk taking. HIV rates, for example, are higher than the national average in the 15-20 years age group. Young Thai people face imperatives to which parents and other authority figures are not able to give answers. One of the most extraordinary things about Bad Genius is the absence of adults. Lynn and her team operate behind the backs of their parents, mounting a cross-continental operation on a momentous scale. We can hardly believe it when we learn that Lynn expects to earn USD 50,000 from it.

The scene introducing him is unbelievable in its decadence, in his father’s indoor swimming pool where anonymous liveried personnel serve him champagne. Is this how the nouveau riche Thai live, you wonder as a foreigner

The very first scene of Bad Genius presents Lynn in an academic environment she will need to make sense of. She is being interviewed for admission to an elite high school. Her father reels off her achievements “selling” her to the principal. But Lynn resists. She displays a disconcerting independence of thought as she tries to figure out if the school is worth the fees. Throughout the film, she displays a reliance on logic and reasoning as she uses her considerable intelligence to navigate a new and morally confusing world, detached from traditional moorings.

The charming and shallow Pat, the second of the cheating foursome, belongs to the nouveau riche. Grace is his sweet yet morally weak girlfriend. The scene introducing him is unbelievable in its decadence, in his father’s indoor swimming pool where anonymous liveried personnel serve him champagne. Is this how the nouveau riche Thai live, you wonder as a foreigner. Pat has been promised a BMW if he does well in his exams and he offers Lynn money against cheating. It comes as a shock to us when she agrees.

Bank is the film’s second genius. Like Lynn, he is poor, like her all he has are his brains. When Bank refuses to participate in Pat’s cheating scheme, Pat gets him attacked and abandoned in a garbage dump. The scene is loathsome and dystopic in the extreme. It is very cleverly structured. When Bank wakes up, neither he nor us know where he is. We come to realise, with mounting revulsion, that he has spent the night on garbage. He is then shot from above, dwarfed and isolated as he runs between two huge and seemingly endless banks of garbage. The scene feels premonitory as we wonder if he will overcome his disadvantage as a poor student in a brutal environment.

The heart of the film is the cheating operation meticulously planned by Lynn. The exam in question is the STIC (an obvious reference to SAT) exam. She heads to Sydney with Bank. The two of them will sit for the exam and relay answers to Pat and Grace who will then relay them to the other students. Lynn expects to earn USD 50,000. Bank will get half of that. Both will use it to finance their further studies. There is a distinct noirish feel to the scene where Lynn and Bank mull over their plan, the evening before the exam, at the ocean’s edge. Will their plan go as scheduled? As the operation unfolds the following day, you are kept at the edge of your seat. Chuengcharoensuking plays the ambivalence and strange integrity of a noir protagonist to perfection who, even as she is on the run, must risk all to keep her word.

Like in the Vyapam scam, in which students resorted to all manner of cheating, from impersonation to replacement of answer sheets otherwise left blank, to get places in government-run professional colleges

Poonpiriya says his aim in making Bad Genius was primarily entertainment. But it is undergirded by substance which is what makes it so effective. For Thai youth, in particular, it must hit home all the time. Exam cheating is a complex phenomenon. It is commonplace in Asia and yet the rot can go very deep. Like in the Vyapam scam, in which students resorted to all manner of cheating, from impersonation to replacement of answer sheets otherwise left blank, to get places in government-run professional colleges. The enquiry has led to the death of more than 40 people so far. It cannot get worse than this, you tell yourself, till, one day, it suddenly does. Lynn’s character thinks and acts out contemporary dilemmas which cut across cultures. What is the relationship between means and ends? Between morality and law? And what do all of these mean in the context of class society?