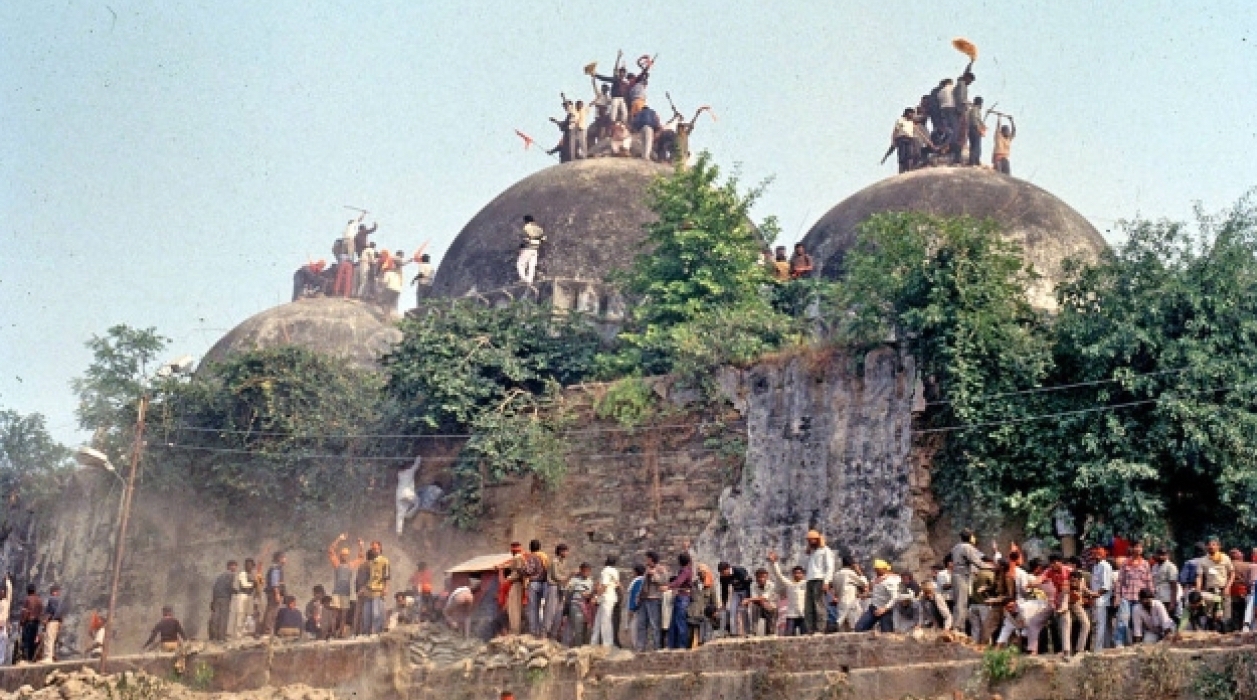 The Supreme Court in its Ramjanmabhoomi judgment recognised the illegalities of Babri Masjid demolition while allowing for the construction of the temple. Today’s long overdue judgment by the trial court will be interesting to see in the context of this observation by the Supreme Court. IBAD MUSHTAQ, an advocate at Supreme Court, writes on what lead to and what’s next after this crucial judgment.

“What happened on 06-12-1992 was not a failure of the system as a whole, nor of the wisdom inherent in India’s Constitution, nor yet of the power of tolerance, brotherhood and compassion that has so vividly informed the life of independent India. It was, the Supreme Court observed on that day, ‘a great pity that a constitutionally elected Government could not discharge its duties in a matter of this sensitiveness and magnitude’. Commitments to the Court and Constitution, pledges to the Parliament and the people, were simply cast aside. Therein lay the failure, therein lay the betrayal.”

Twenty-eight years after the strategic demolition of the Babri Masjid in Ayodhya, a Special CBI Court is set to pronounce its verdict on September 30. This comes after a series of orders of Supreme Court orders that the trial is concluded timely and definitively. The accused include noted politicians like Lal Krishna Advani, Uma Bharti, Vinay Katiar, Sadhvi Ritambara and Murli Manohar Joshi.

On November 09, 2019, the Supreme Court delivered its judgment favouring the construction of Temple while terming the destruction of the mosque as an “egregious violation of rule of law”.  We wait to see what effect the development will bear on the fate of the accused before the Special CBI Court.

In this backdrop, it becomes imperative to understand the developments that this case has seen. From the FIRs registered after the Rath Yatra to the cases against Kar Sewaks and leaders of the Bhartiya Janata Party and the Vishwa Hindu Parishad.

One of the slogans raised continuously at Ayodhya, was – “Ayodhya toh tayyari hai, Kashi-Mathura ki baari hai” (Ayodhya is just preparation, next turn is for Kashi and Mathura)

The Ram Rath Yatra and the Demolition of the Structure

Contesting suits were filed before the Civil Court at Faizabad between 1951 to 1986, after the idols were placed on the night of December 22, 1949. During the span of 36 years, District and High Courts ordered the maintenance of the status quo, that prevailed, and no new litigation was undertaken by the parties.

However, on January 25, 1986, Advocate Umesh Chandra Pandey submitted a fresh application in the Original Suit of 1950 demanding opening of locks and permission for Hindus to worship in the Central Dome of the Masjid.

This litigation caused the propagation of a fresh set of vitriol amongst masses, seeking reconstruction of the Ram Temple that the Hindus claimed was destroyed by Mughal Emperor Babur who was the founder of the Mughal dynasty. We witnessed numerous campaigns from 1986 to December 6, 1992  to demolish the Babri Masjid.

With the rallying chants of “Ek Dhakka Aur Do, Babri Masjid Tod Do” (Give another shove and break the Babri Mosque), bands of Kar-Sevaks, enraged by the vitriol being spewed from a stage set nearby, climbed the domes of the Babri Masjid and brought it down.

The dispute had moved far beyond a simple civil suit or a disagreement between local residents of two faiths and had been catapulted into the political mainstream. BJP-VHP issued the infamous clarion call of “Ram Lalla Hum Ayenge, Mandir Wahin Banayenge” (Ram Lalla we shall come, temple shall be constructed there only). Lal Krishna Advani’s “Ram Rath Yatra” left a trail of communal clashes till Bihar CM Lalu Prasad Yadav stopped the Rath Yatra at Samastipur on October 23, 1990.

The VHP performed “Shilanyas’ ‘ or the ground-breaking ceremony for the construction of a temple in close proximity of the disputed structure in 1990. Leaders delivered hate-filled and provocative speeches, marring the democratic-secular fabric of the nation for ages to come. On December 06, 1992, the small town of Ayodhya, the fabled seat of Lord Shri Ram’s judicious and tolerant rule known as the “Ram Rajya”, witnessed carnage of the worst degree. With the rallying chants of “Ek Dhakka Aur Do, Babri Masjid Tod Do” (Give another shove and break the Babri Mosque), bands of Kar-Sevaks, enraged by the vitriol being spewed from a stage set nearby, climbed the domes of the Babri Masjid and brought it down.

The then Chief Minister of Uttar Pradesh, Kalyan Singh was forced to resign that evening itself. A makeshift temple was raised atop the rubble amidst the imposition of the President’s Rule on the state.

The history of FIRs against the Karsewaks and political leaders

In 1993, a special court was initially set up at Lalitpur in UP for trying the cases, in consultation with Allahabad High Court. Before the transfer, the Special Magistrate had already added charges of conspiracy to the Karsewaks FIR. The Uttar Pradesh government notified the trial against the Kar Sewaks but the FIR against leaders was surprisingly missing from this notification. The U.P. Govt. later amended the notification to include the FIR against political leaders, but the same was struck down for lack of consultation with the High Court under Section 11(1) of the Criminal Procedure Code.

In 1996, CBI filed a supplementary charge sheet against L.K. Advani, Ashok Singhal, Vinay Katiar, Uma Bharati, Sadhvi Ritambara, Murli Manohar Joshi, Giriraj Kishore, and Vishnu Hari Dalmia. On September 09, 1997, the Special Judge at Lucknow passed an order satisfied that a prima facie case was made out against the eight leaders.

This decision was challenged before the Allahabad High Court and, on February 12, 2001, the High Court set aside the order. The amendment of notification transferring FIR No. 198 to Lucknow was held to be bad in law but termed as a curable legal infirmity. While the CBI requested the state government to cure such a defect, the request was turned down by the UP government.

Interestingly, rather than choosing to challenge the said rejection, the CBI chose to file a supplementary charge sheet before the Judicial Magistrate in Raebareli for trial against the political leaders.

On May 04, 2001, the Special Court dropped proceedings against a total of 21 accused, all leaders of various political factions, including the aforesaid 8 persons and 13 other leaders. The judgment was challenged before the Allahabad High Court, but the High Court too refused to accept the revision and upheld the special judge’s reasoning that differentiated between Kar Sewaks and political leaders. It also held that since the CBI’s supplementary chargesheet filed at Raebareli failed to mention criminal conspiracy and so the same was never made out against the 8 persons. Intervention of Supreme Court and Conclusion of Trials

It was after the High Court’s approval to discharge the political leaders that the CBI finally approached the Supreme Court in 2011. After repeated formal orders ensuring service of notice to various respondents in 2017, the matter finally landed before a bench of Justices Pinaki Chandra Ghose and Rohinton Fali Nariman. After hearing on three days, March 22, March 23, and April 06- the division bench of the Supreme Court reserved its verdict on April 06, 2017.

The judgment, authored by Justice Rohinton Nariman, detangled the procedural labyrinth that had marred the case and resulted in the discharge of 21 key accused on charges of conspiracy on mere technical infirmities.

Using its powers under Article 142 of the Indian Constitution, to do complete justice, the Supreme Court ordered the consolidation of all trials arising from all the FIRs before the Special Court at Lucknow. In doing so, the Supreme Court also placed reliance upon the earlier judgment of the Allahabad High Court that both the offences which were the demolition by the Kar Sewaks and instigation by the leaders formed a part of the same transaction.

Using its powers under Article 142 of the Indian Constitution, to do complete justice, the Supreme Court ordered the consolidation of all trials arising from all the FIRs before the Special Court at Lucknow.

Holding the Allahabad High Court’s 2010 verdict as wrong, the Supreme Court transferred the trial from Raebareli to the Special Judge in Lucknow. It directed the Special Judge at Lucknow to add the charge of criminal conspiracy against L.K. Advani, Vinay Katiar, Uma Bharati, Sadhvi Ritambara, Murli Manohar Joshi and Vishnu Hari Dalmia.

It also directed the Special Court at Lucknow to take up all the matters on a day-to-day basis. Additionally, the Supreme Court’s judgment barred the transfer of the judge conducting the trial, de novo trial, and grant of adjournments for want of witnesses, unless absolutely necessary, and for reasons to be recorded in writing.

Though the Court had initially set a timeline of two years for the conclusion of the trial before the Special Judge, on August 19 it directed delivery of judgment by September 30.

As the Special Court at Lucknow is set to pronounce its verdict in the criminal cases on the demolition of Babri Masjid, the decision holds immense importance due to its chequered background. A five-judge bench of the Supreme Court in its judgment in the title suits on November 09, 2019, unequivocally held as under:

One of the slogans raised continuously at Ayodhya, was – “Ayodhya toh tayyari hai, Kashi-Mathura ki baari hai” (Ayodhya is just preparation, next turn is for Kashi and Mathura). Thus the decision holds immense importance in light of the recent calls to reclaim the Shahi Eidgah at Mathura, claimed to be the birthplace of Lord Krishna.

In this background, it is time to pay heed to the parting observations of Justice S. P. Bharucha in the case of M. Ismail Faruqui (Dr) v. Union of India:

“Hinduism is a tolerant faith. It is that tolerance that has enabled Islam, Christianity, Zoroastrianism, Judaism, Buddhism, Jainism and Sikhism to find shelter and support upon this land. We have no doubt that the moderate Hindu has little taste for the tearing down of the place of worship of another to replace it with a temple. It is our fervent hope that that moderate opinion shall find general expression and that communal brotherhood shall bring to the dispute at Ayodhya an amicable solution long before the courts resolve it.”

(Ibad Mushtaq is an advocate at High Court of Delhi and Supreme Court of India. Views are personal.)