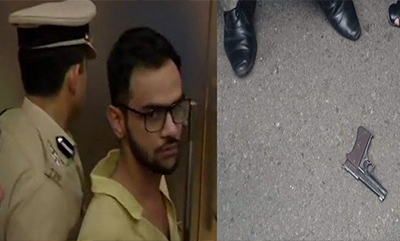 [dropcap]I[/dropcap]n an event titled “Khauff Se Azadi” – Towards a freedom without fear, scheduled to be held today at the Constitution Club of India near the Parliament and organised by United Against Hate Initiative, an unidentified person fired at JNU student Umar Khalid, who was there to attend the event. He escaped unhurt.

Talking to The Qunit, Umar Khalid said how “it is ironic but not surprising”.  His friends overpowered the assailant and he ran away and tried to shoot him from across the street.

The incident is a stark reminder of what happened to Gauri Lankesh last September, as well as an ominous sign of how hatred is being propagated and misinformation and propaganda is being spread by the news channels and media houses and troll army, tagging anyone who questions the present government as anti-nationals.

Umar Khalid said he was very scared when the gun was pointed at him. “In that moment I was being reminded of what happened to Gauri Lankesh and I thought my time has arrived”. When the reporter asked him if there was a question he could ask the present government to which he responded “we came together to ask questions only. Even if the attack did not happen we were still asking questions. We want freedom from fear.”

Khalid Saifi, an eyewitness who was with Umar Khalid, and one of the organisers of the United Against Hate platform, told the NDTV that they were at a tea stall near the venue when a man in white shirt opened fire at Umar Khalid. “Khalid lost his balance and fell down, thereby narrowly escaping the bullet. Khalid’s friends tried to chase the assailant but he crossed the street and fired in the air. While he was running, he dropped the pistol in a panic.”

Umar Khalid’s statement is being recorded at the Parliament Street Police Station. “Ever since the recent spate of death threats, we made repeated requests and appeals to the Delhi police for protection to Umar Khalid. But to no avail. And today he has been attacked with a gun,” writes Anirban Bhattacharya on social media.

Jignesh Mevani, Dalit activist and an independent MLA from Gujarat, tweeted in solidarity with Umar Khalid.

My reaction on Umar Khalid pic.twitter.com/wkjOLFyip3

RT if you think attack on Umar Khalid was staged and done in front of media to victim play and attack Modi.