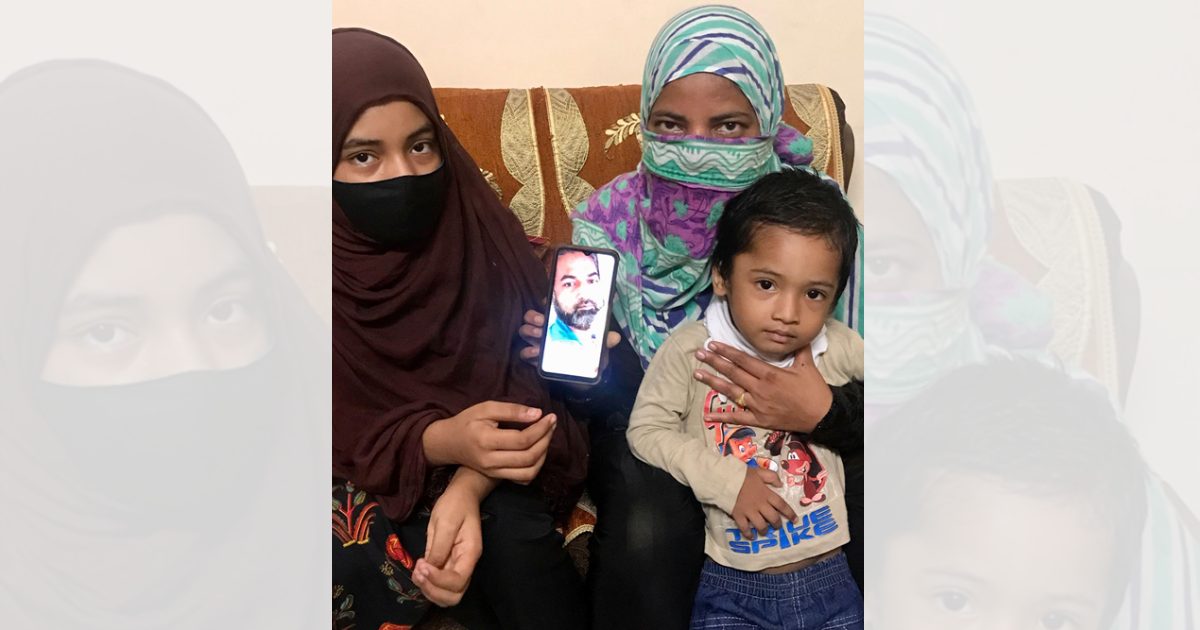 As their kin spend another month in jail over ‘Al Qaeda module’ arrests, families of UP ATS accused shed light on glaring loopholes in the case

Between July 11 and 14, the Uttar Pradesh Police’s Anti Terrorist Squad (ATS) arrested five Muslim men on allegations of links to an Al Qaeda-affiliated outfit. Families of the accused highlight anomalies in the UP ATS’s claims of a terror plot, speaking of “being scapegoated” for the upcoming state elections, reports SABAH GURMAT.

LUCKNOW/MUMBAI: For sixty year old Sayyidun, life has not been the same since the fateful Wednesday of July 14, 2021. Her son, thirty-five year old Shakeel Hussain is lodged in Lucknow’s district jail, two months since his arrest by the Uttar Pradesh Anti Terrorist Squad (ATS) on July 14. “My son drives an e-rickshaw, and he was out looking to ferry passengers when they (the ATS) picked him up from the Pakka Pul (Hardinge Bridge) area. Then they came to our slum to do a search and seizure. I was out on the road when I heard what happened; the shock of it all made me faint on the spot”, said Sayyidun wearily.

The ailing Sayyidun lives with at least five other family members in a tiny, two-room tenement in Lucknow’s Janta Nagri locality in Wazirganj.

Hussain’s elder brother, Ilyas, runs odd-jobs transporting gas-cylinders to and from people’s homes. Calling Hussain’s arbitrary arrest ‘zulm’, he recounts the ‘media-trial’ that took place on the day of his brother’s arrest. “We won’t forget that day. Zee News, Amar Ujala, all of them were taking videos of our home, calling this a ‘terrorist’s home’. He [Hussain] did not even have a passport. We are so poor and they were showing us as the family of an internationally-dreaded terrorist; did anyone even bother to show this jhuggi or ask about my brother Shakeel’s livelihood?”

On July 11, the UP Police’s ATS announced the arrest of two men, Mushiruddin and Minhaj Ahmed, accusing them of being affiliated to the Ansar Ghazwat-ul Hind, a Kashmir origin outfit linked to the international terrorist organization Al Qaeda.

In a statement given to the press, Additional Director General (ADG) of Police (Law & Order), Prashant Kumar claimed that arms and explosives had been recovered from the possession of the accused. ADG Kumar noted that “one Umar Helmandi” had been “trying to radicalise and train people here”.

“They were targeting various cities in UP, mainly crowded marketplaces and important sites for explosions”, said Kumar while emphasising that Lucknow was their main target. He added that the alleged attacks had been planned for August 15, on India’s Independence Day.

Three days later, the UP ATS made three more arrests – Mohammad Mustaqeem, hailing from the western district of Muzaffarnagar, Shakeel Hussain and Mohammad Mueed. All five are presently detained in Lucknow’s district jail. Under First Information Report (FIR) No. 0010/2021, the men have been booked on several charges, including Section 124A (sedition) of the Indian Penal Code 1860 , sections 13, 18, 18B, 20, 39 of the Unlawful Activities (Prevention) Act 1967 (UAPA), as well as provisions under the Explosive Substances Act 1908 and the Arms Act, 1959.

ADG Prashant Kumar told the media that explosives and “two pressure cooker bombs” had been retrieved by the police.

But for Syeda, wife of Mushiruddin, the police coming in plain-clothes to take away their household’s pressure-cooker feels like a “farce”. Speaking to The Leaflet, Syeda (who only goes by her first name), said, “At 11 a.m., the ATS officials dressed in plain clothes came to our basti and asked for Mushir. My husband was barely in his banyan (vest) and pants, and they arrested him, taking him to Madiyaon police station. We also went along to accompany him. But when I returned home a few hours later, I found that the police had frisked the entire place, and our pressure cooker was taken away!”

Even though Mushiruddin’s wife claimed he was 44 years of age, the family said that the ATS listed his age as 50. A father of four, Mushiruddin worked as an e-rickshaw driver and was the sole-earning member in their household consisting of eight people.

“He had just one mobile in the past 15 years. Would a terrorist do that? We bought a cooker and a new choolha because my eldest daughter is getting old, and we found the cops had taken all these belongings behind our presence”, said his wife Syeda. Her 11 year old diabetic daughter Zeba was at home crying when the police shooed her away and frisked the house while the rest of the family were at the police station, claims Syeda.

Lawyer and activist Mohammad Shoaib, who heads the advocacy group Rihai Manch told The Leaflet that the family “did not even have a door in their house” at that time of the frisking and only got a door installed now.

“There has been no actual recovery from people’s homes; all the families were removed from these places and police are simply claiming they got these things. Why not check the accounts and passbooks of these people? Just by the police and ATS going into people’s homes and organising press conferences, how can you prove they are terrorists?,” he questions.

Others arrested include 30 year old Minhaj Ahmed, who ran an electronics and batteries shop as part of a partnership. A resident of Lucknow’s Dubagga area, Ahmed dealt with e-rickshaw batteries.

His parents, Siraj Ahmed and Talat Fatima, noted with anguish how their son was “feeding [their] goat that morning and the ATS just whisked him away” despite their multiple cries asking for at least some information about what he did.

A retired additional statistics officer, the 67 year old Siraj Ahmed said, “Our son didn’t even have a passport. They just came into our home, cordoned off the area to our son’s room, and came back after several hours saying we have recovered all this from his room. They never opened the boxes or showed us what they recovered. They just frisked us, made us sign an unfilled proforma, and left.”  His parents also pointed out that the ATS did not furnish a search memo as is mandated by the Section 100(6) of the Criminal Procedure Code, and it was only when the case was transferred to the National Investigation Agency on August 4, that they received the same from the NIA.

“He was our only son. He would wake up early daily to make tea for us; to lay the table for us; lay out dinner for us. We are the type of people who would always ask our son anytime he would go out, to send his location, to check with him when he is to come back. There was never anything untoward,” they explain.

Fake recoveries, made up links?

Shoaib notes that no recovery memos were prepared by the police at the time of search and seizures. “Instead, the police prepared these memos at the ATS thaana”.

For Mohammad Saeed, the arbitrary arrest of his younger brother Mohammad Mueed has still “not made sense”. The 29 year old Mueed was a supervisor for building and masonry. “At 1:30 p.m. in the afternoon he was going to recite Namaz, and they picked him up from Ghantaghar. For days on end, no one informed our family of where they kept him. Even after more than one month of his arrest, I have not got a chance to speak with him even once.”

“They accuse him of carrying Riyals [Saudi currency] and being a terror mastermind, but he did not even have a passport.”

While ATS in their press-releases claimed the recovery of ‘IEDs’ and ‘pressure cooker bombs’, Shoaib also added that there was no recovery from three of the five accused, namely Mueed, Mustaqeem and Shakeel. “There are so many fake recoveries. At the time of arrest, it is mandatory under the Criminal Procedure Code to get a competent, local witness at the time of recovery to ensure fairness. But the UP ATS has not bothered with any of this”, Shoaib said.

The Leaflet reached out to various officials in the UP ATS, including the Inspector General (IG) G.K. Goswami to enquire about the investigation on the case and filing of the chargesheet. Upon our queries, the Deputy Superintendent of Police (DSP) Mohan Verma responded that, “The matter is now with the NIA” and declined to comment any further.

Lucknow-based social activist Rajeev Yadav from Rihai Manch notes that at least four of the five accused came from “very poor families”. “Both Shakeel and Mushiruddin drove e-rickshaws, Mueed was involved in supervising building work and Mustaqeem was a labour contractor”, said Yadav. Noting how none of the individuals even knew each other beforehand, he added that the authorities seemed to have made up links owing to similarities in their profession. “Just because Minhaj Ahmed ran a shop for batteries and Mushiruddin and Shakeel drove e-rickshaws and so might have gone to that shop to purchase batteries, how can you establish any close relationship?”

Shoaib, who has helped attain acquittal for over a dozen terror-accused, argues that “as long as the elections will come closer, they will keep doing this. This is their tactic to induce silence.”

On September 14, 2021, a fresh round of arrests were made after the UP ATS and the Delhi Police’s Special Cell arrested six men on grounds of an “ISI sponsored terror plot” purportedly planned to target multiple cities. Of the six accused, three men – Mohammad Javed hailing from Lucknow, Zeeshan Qamar from Prayagraj and one Lala alias Moolchand from Rae Bareli – were arrested by authorities in UP.

There have been several recent instances of abuse of the draconian UAPA for political purposes against minority community members, political dissenters, activists and journalists by the current union government.

According to data from the NCRB, 4,231 UAPA cases were booked, pursuant to which 5,922 people put behind bars between 2016 and 2019. However, charge sheets were filed only for 1,306 cases – this means only 22 percent of the accused people and 30 percent of the registered cases were investigated.

The latest data from the National Crime Records Bureau (NCRB)’s report for 2020 reveals that Uttar Pradesh, along with Assam and Manipur are amongst the states recording the highest number of cases under the category of “offences against the state” (sedition and UAPA). As of 2020, 72 cases under the UAPA were reportedly registered in UP, as per the NCRB’s latest report.

Less than a year ago in October 2020, authorities in the state booked eight men, including Kerala journalist Siddique Kappan, under the stringent anti-terror law after they attempted to meet the family of a rape and murder victim in western UP’s Hathras. Reports highlighted that even after 100 days passed since a district court in Mathura took cognizance of a chargesheet filed against the eight UAPA accused in the Hathras case, the accused were yet to receive a copy of the same.

Only in the last few months, various courts have released Muslim men kept under arrest for years on terror charges under UAPA due to lack of sufficient evidence to prosecute them.

In July, the Kashmiri Bashir Ahmad Baba was acquitted by a Surat court after spending 11 years in prison over terror charges under UAPA brought over him by the Gujarat ATS. In June, Tripura native Mohammed Habeeb was discharged of UAPA charges by an NIA court after spending four years in detention in Bangalore upon arrest by the NIA. The same month, the Maharashtra duo Mohammed Ilyas and Mohammed Irfan were acquitted of UAPA charges after spending nine years in prison. They had been arrested by the Maharashtra ATS. And in March, a Surat court acquitted 127 Muslim men who had been under detention for 19 years after being booked under the UAPA by the Surat police.