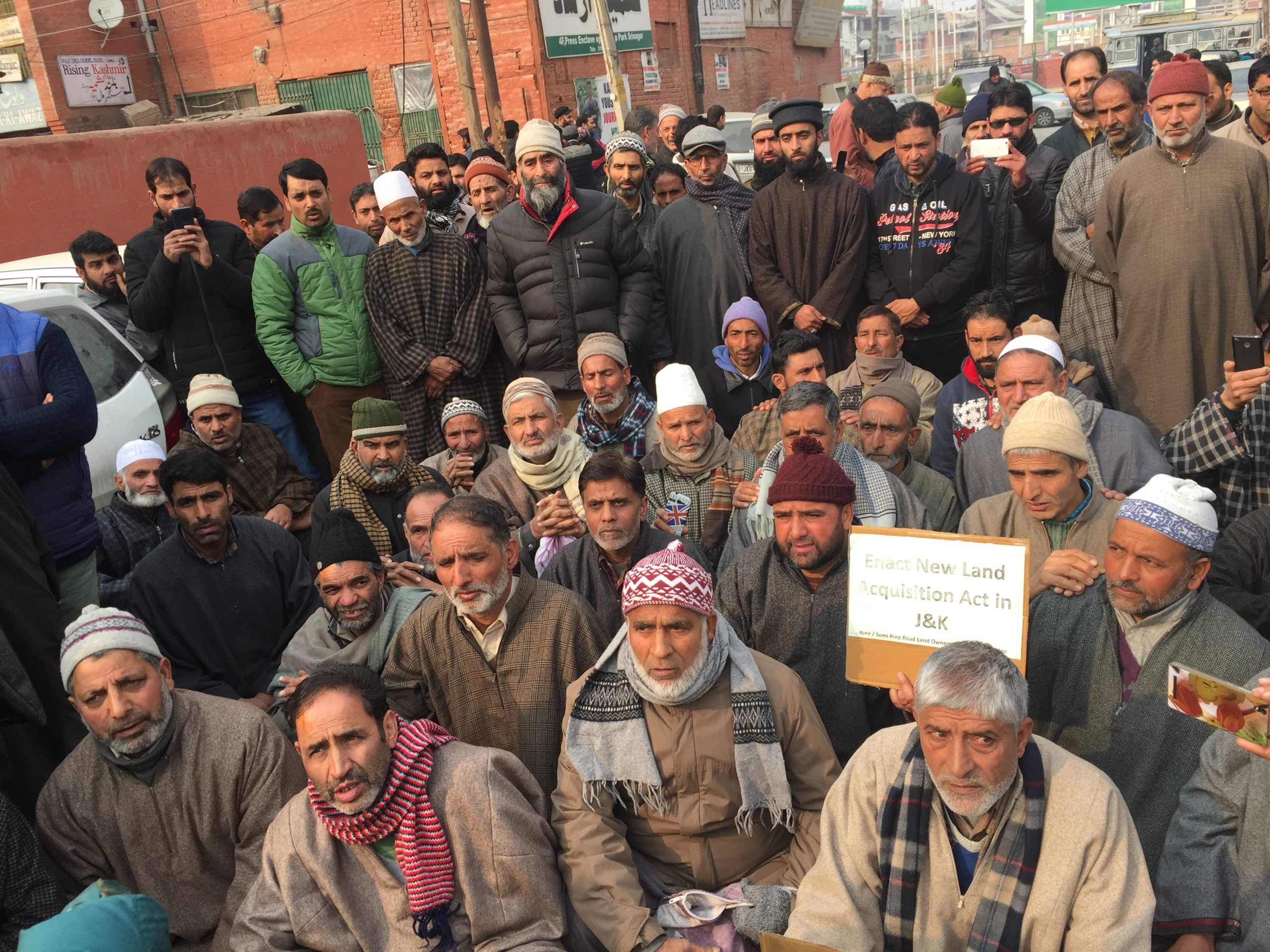 As complaints pour in about cases of forcible land acquisition in Jammu and Kashmir, High Court expresses its concern over violation of human rights

There are several cases of forcible land acquisition by the government in Jammu and Kashmir. Therefore, a recent order of the Jammu & Kashmir and Ladakh High Court holding the acquisition of land by the State without paying adequate compensation to the former landowner as a violation of their human rights assumes importance, writes DR RAJA MUZAFFAR BHAT.

FORCIBLE land acquisition in Jammu and Kashmir by the government has been a matter of great concern for the last many years. People have been trying to raise their voice against it, but to no avail.

Recently, the Jammu & Kashmir and Ladakh High Court delivered a noteworthy order on forcible land acquisition by the government. A division bench of Chief Justice Pankaj Mittal and Justice Javed Iqbal Wani said that non-payment of compensation to affected landowners was a violation of their human rights. The verdict said that it was an abuse of the process of law by depriving petitioners from their valuable right to possess property.

“Right to Property/Land used to be a fundamental right but now it has been recognized as a constitutional right vide Article 300A of the Constitution of India. It provides that no one can be deprived of his property save by authority of law. The aforesaid constitutional right has been acknowledged to be akin to a fundamental right and more importantly a basic human right. Thus, no one can be deprived of his property without following the procedure prescribed in law and payment of adequate compensation.”

The Department of Rural Development, Jammu and Kashmir government wanted to construct a multipurpose community hall in the remote village of Batroo at tehsil Pogal Paristan (Ukhral) in Ramban district. This village is located about 180 km from the city of Jammu. As there was no state land available in this mountainous area, the government intended to acquire a piece of land in 2012-13 measuring two kanals and three marlas (10,900 sq feet, approximately) belonging to two brothers, Krishan Singh and Balwan Singh, both residents of Batroo village. There were nine walnut trees on this land as well, which were axed for paving the way for construction of the community hall.

The High Court said that non-payment of compensation to affected landowners was a violation of their human rights. The verdict said that it was an abuse of the process of law by depriving petitioners from their valuable right to possess property.

Krishen Singh and Balwan Singh moved the High Court as they were deprived of compensation by the government for the same for several years.

The Collector, Land Acquisition, Ramban, in his objections to the writ petition filed before the high Court said that an indent was placed by the Assistant Commissioner (Development), Ramban on December 28, 2017 for initiating proceedings for the acquisition of the above two kanals and three marlas of land for the construction of the community hall. Accordingly, a notification under Section 4(1) of the State Land Acquisition Act was issued on January 9, 2018. Thereafter, the case was submitted to the District Collector, Ramban for issuing necessary declarations under Sections 6, 7 and 17 of the Act.

“The matter for final acquisition of the land stands submitted to the Government and the notification under Section 6 of the Act would be issued once a decision in this regard is taken by the Government”, reads the response containing objections filed by the Collector, Land Acquisition, Ramban district before the high court.

“On the above pleadings, it is crystal clear that the land of the petitioners has been utilized for the construction of a multi-purpose community hall but without there being a formal acquisition in as much as till date no declaration under Section 6 of the Act has been issued and published. The hall stands constructed without acquisition of land and without payment of any compensation. The stand of the respondents is that the matter regarding completion of acquisition proceedings is submitted to the Government and they would be paying the compensation once the proceedings are complete and the final award is pronounced. They accept that as against the estimated cost of acquisition of Rs. 15,00,000/-, the indenting department has deposited a sum of Rs. 4,50,000/- only but even that has not been distributed to the lawful owners of the land.

In the above circumstances, the respondents are clearly guilty of violation of the human rights of the petitioners and they are liable to compensate them for such infringement. At the same time, since the community hall has already been constructed and the land cannot be restored to the petitioners, it is desirable that the respondents complete the acquisition proceedings at the earliest and make a final award so that the petitioners may be compensated in a fair manner as per the market-value.”

The intending department had prepared a Detailed Project Report for execution of the work, presumably on a misconceived notion that the entire land under the alignment for construction of the proposed road was the sole property of the Government and not of any individual subject of the area.

The high court issued a writ in the nature of mandamus commanding the respondents, that is, the Jammu and Kashmir government, to forthwith distribute the estimated cost of acquisition of the aforesaid land, which has been worked out to be fifteen lakh rupees – within a period of one month from the date of issuance of order, which was December 30, 2021. The court also directed that land acquisition proceedings be concluded by issuing a declaration under Section 6 of the repealed State Land Acquisition Act, and pronouncing the final award within a period of three months. The court further directed the Secretary, Rural Development Department to pay an amount of ten lakh rupees to the petitioners within two weeks.

While talking to The Leaflet, Syed Nasarullah, a retired Chief Administrative Officer in Jammu and Kashmir judiciary said that the petitioners aggrieved should be compensated as per the RFCTLARR Act, which is applicable in Jammu and Kashmir with effect from Oct 31, 2019, for which a fresh notification would have to be issued under the existing law.

In a similar case, the Collector, Land Acquisition of Ganderbal district in central Kashmir issued a notification under section 4 of the State Land acquisition Act on October 21, 2017. The Collector, through the notification, expressed the intention to acquire around 23 kanals of land (approximately three acres) for widening, further construction and upgradation of the Pandach–Beehama Ganderbal road in the Malshahibagh area of tehsil and district Ganderbal.

Prior to the issuance of notice inviting tender, the intending department, comprising the District Collector, Ganderbal and Executive Engineer, PWD (R&B), Ganderbal had prepared a Detailed Project Report (DPR) for execution of the work, presumably on a misconceived notion that the entire land under the alignment for construction of the proposed road was the sole property of the Government and not of any individual citizen.

The aggrieved land-owners moved the Jammu & Kashmir and Ladakh High Court, and the division bench of Chief Justice Mittal and Justice Sanjay Dhar, in an order dated July 28, 2021 said that as no declaration had been made under section 6 of the State Land Acquisition Act, the notification issued under section 4 is simply a proposal to acquire the land. The court ordered that petitioners were free to use their land as ownership of the land had not passed on to the government.

Also read: Eminent domain doctrine in India and the lack of due process

From grievance to tragedy

There was the tragic case of Harbans Lal of Bishnah town in Jammu, whose house was demolished by the government for the construction of Ring Road in Jammu. Lal, a retired Sub Inspector in the Sashastra Seema Bal, was paid a mere seven lakh rupees for a house and land spanning 2,722 sq. feet (10 marlas of land). Sahil Kumar, Lal’s son, told The Leaflet that the market value of the land and the house was around one crore rupees, but they were forced to settle for only 11 lakh rupees, out of which seven lakh rupees were transferred into Lal’s account. Lal, who belongs to the Scheduled Caste community, committed suicide in July 2020.

Even after extending the RFCTLARR Act to Jammu and Kashmir post the abrogation of Article 370, the Collectors appointed under this Act are reluctant to invoke the act as the union territory’s government is yet to come out with rules under the Act. The aggrieved villagers in Budgam have filed at least six petitions before the Jammu & Kashmir and Ladakh High Court as the government wants to acquire more than 550 acres of agricultural land in the district for the construction of a Srinagar Ring Road. These petitions have been clubbed together, and construction work has been stayed by the high court.


“The declaration in most of the villages of Budgam district was made under section 6 of the Jammu and Kashmir Land Acquisition Act 1934 (Samvat 1990) in 2017. It lapsed in 2019 due to an efflux of time. Section 11B of the act says that awards should be made within two years of time from the date of declaration under section 6. Even the District Collector authenticated this fact and wrote a letter to Divisional Commissioner, Kashmir in May 2020. The said officer was transferred and the government prepared awards after three years, which was viewed seriously by the High Court. We got some interim relief, but the Collector, Land Acquisition, Budgam is not submitting his response before the high court and the case is getting delayed. Even in some cases, the district administration forcibly tried to acquire land. Now the Collector and other respondents have been given a last chance by the high court to file objections. We are hopeful that the high court will order for issuance of a fresh notification under the RFCTLARR Act”, said Advocate Shafqat Nazir, who is pleading the case of a group of aggrieved farmers from Wathoora village in Budgam.

The union government must harbour sincere intentions to help the aggrieved farmers of Jammu and Kashmir, who are officially recognised as marginal farmers in view of their small landholdings. The land in Jammu and Kashmir is shrinking day by day; on the other hand, authorities continue to transfer State land, forest land, tourism land and even agricultural land for infrastructural development and defence purposes.

Even after extending the central land acquisition act to Jammu and Kashmir post the abrogation of Article 370, the Collectors appointed under this Act are reluctant to invoke the Act as the union territory’s government is yet to come out with rules under the Act.

For instance, more than 500 acres of prime agricultural land has been recently acquired by the Defence Estates Department (DED) at the Karewa Damodar estate near Srinagar airport. The market value of an acre of land in this area is, according to some estimates, eight to nine crore rupees, but the affected farmers have been paid merely 38 lakh rupees per acre in 2011.

The government said that the rates would be enhanced to one crore rupees per acre, which is again less, but that is also not being processed. On the other hand, the land is already under possession of DED, and 200 aggrieved families have been waiting for their due compensation for the last eleven years.

(Dr Raja Muzaffar Bhat is a Srinagar-based columnist and activist. He is the founder and chairman of the Jammu and Kashmir RTI Movement and an Acumen India Fellow. The views expressed are personal.)