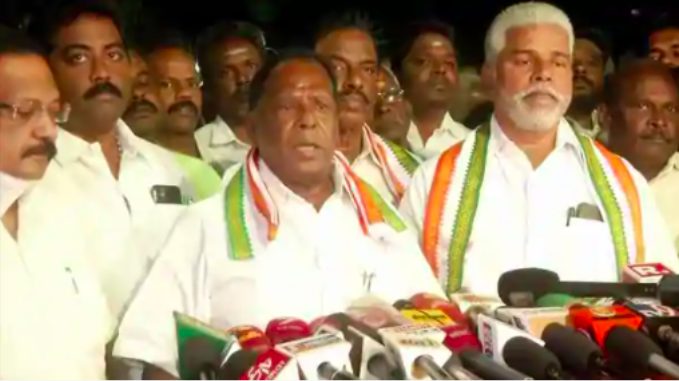 Anti-Defection Law has Failed and Should be Scrapped

India has a peculiar brand of politics and most of it does not respect democratic values and institutions. This is why just having a law is meaningless as political parties will find a way to skirt it. The Anti-Defection Law has not served its purpose and should be scrapped or re-sculpted again, writes RAMESH MENON.

ANOTHER bastion of the Congress has fallen with the Congress-led Puducherry government falling. Chief Minister V Narayanasamy resigned even before a trust vote as four of his MLAs resigned plunging his party into a minority in the picturesque Union Territory of Puducherry.

After the recent resignation of five of its MLA’s egged on by the BJP, it was a foregone conclusion that the government would fall when the state was on the brink of state elections.

That is why the opposition stitched together by the All India NR Congress, AIADMK and BJP is unlikely to stake a claim to form the government. President’s rule is most likely.

One thing that stood out in the whole drama was the reminder of how numerous governments like this has fallen down the years and how the Anti-Defection Law had failed to do what it was originally designed for.

With the fall of Puducherry, Congress now does not have a single southern state in its grip for the first time in 40 years. However, in the upcoming elections, it has a chance to probably make a comeback in Kerala and Puducherry.

Narayanasamy was a staunch Gandhi loyalist and had primarily made it as CM because of that. Ahmed Patel who recently passed away was one of his staunch supporters ensuring that the Sonia Gandhi camp stood by him.

In the last four and a half years, the centre made sure he was checkmated on a daily basis by former Lieutenant governor Kiran Bedi who was aggressively pro-active and almost ran a parallel government as she insisted on officers reporting to her on various matters of governance. On his last day in office, Narayanasamy said that he fought her every single day for interfering in ruling the Union Territory. In fact, he had recently complained to President Ram Nath Kovind that Bedi was interfering with the administration and not allowing him or his ministers to function.

It is still not clear why the centre showed the door to Bedi who did all she could to undermine the authority of the Chief Minister and show that she was the ultimate authority. Sources say she was removed as the BJP wanted to neutralise the propaganda of Narayanasamy and the Congress that he was not allowed to work freely. So by removing Bedi overnight, the BJP also robbed him of his main campaign tool. Talking of Bedi’s role at election meetings will not draw any sympathy as she is no more around. The BJP also saw this as an opportunity to pander to regional sentiments by bringing in a Tamilian, Dr. Tamilsai Soundararajan as LG.

Will the BJP be able to win seats in Puducherry when they did not get a single seat in the last assembly election in 2016?  The three BJP members in the assembly are nominated members. One of them is the state BJP president V. Saminathan.

The BJP will be nowhere near a win to form a government independently, but it has succeeded in dislodging the last Congress government in the south helping it to inch closer towards its goal of driving the Congress out of power in every state.

In the last 35 years, the Anti-Defection Law has not worked the way it was envisaged.

It came into being as the Indian political scenario was pockmarked by frequent defections that had little ideological reasoning. Politicians switched sides depending on what they would achieve in terms of power. Secretly everyone knew that horse-trading of the worst kind was happening as money changed hands. But there was little proof as it was done clandestinely. This often led to political instability as governments collapsed with resignations and were replaced by a ragtag bunch of legislators who had little scruples.

The anti-defection law was brought by Rajiv Gandhi, and it was recommended by the Dinesh Goswami Committee on electoral reforms in 1978. Rajiv Gandhi argued while pushing for the bill that it was 10 years too late, and there was a need for it. This was in 1988. It looks like Dinesh Goswami favoured anti-defection in the wake of the Aaaya-Rams and Gayaa-Rams of the early 1970s, a term that was sarcastically used in the political lexicon to denote how politicians came and left the party to join another and then again rejoin the original party they were from.

The Anti Defection Law is contained in the 10th Schedule of the Constitution. It came into effect in March 1995 after being enacted by Parliament.

The 10th Schedule says that if there is a merger between two political parties and two-thirds of the members of a legislature party agree to it, they would not be disqualified. But today, as it is difficult to get two-thirds to move as a block, political parties get the dissenters to resign promising them tickets and other lolly once they are in power.

Devender Singh Aswal, former Additional Secretary of the Lok Sabha, told The Leaflet: “The games politicos play defy ordinary ingenuity. The way the anti-defection law has been brazenly thwarted, time and again and overtime, calls for its review, including the need to debar anyone from becoming a Minister without first getting elected to the legislature.”

The way the Puducherry government became prey to defection at the fag end of its term, bore to the fore the fact that this law does not work.  The anti-defection law enshrined in the Constitution by the 52nd Amendment, which was later further amended by the 91st Constitution (Amendment) Act, in 2003. The sum and substance of these constitutional amendments is that a member of the legislature, whether of the Union or the State Legislature, shall be disqualified if she or he is disqualified under the Tenth Schedule. The precise grounds for disqualification of a legislator, as per the Tenth Schedule are, if she or he has voluntarily given up the membership of such political party, or if they votes or abstains from voting in the House contrary to the direction or the whip issued by the political party of which they are members.

However, in the case of merger of not less than two-thirds of the members of the legislative party with another party, the anti-defection law will not apply. The competent authority to decide the question of disqualification is the presiding officer, the Chairman/Speaker, which, after the judgment of the Supreme Court in the Kihoto Hollohan versus Zachilhu and others, case in 1992, can be a subject of judicial review.

Added Aswal: “Every party is empowered under its constitution to enforce discipline for attaining its political goal. Without discipline, political parties would be reduced to a mere horde of power-hungry people bereft of any sound political moorings and identity. The law of defection, in a way, can be likened to the principles of criminal jurisprudence which require twin tests of mens rea and actus reus in order to constitute a criminal offence. The mere probability of defection cannot be a ground for disqualification, except that a political party can expel such members from the legislature party. The rampant and incessant defections by legislators are also indicative of the new kind of politics of clinging to power sidetracking political ideologies. The distinguishing features of political parties- often so powerfully flaunted-have disappeared and replaced by the wholesale and thriving politics of defection.”

Just a few months ago we saw how a democratically elected government in Madhya Pradesh collapsed as Congress legislators headed by Jyotiraditya Scindia resigned. The BJP moved in to form the government as they had the numbers. Former chief minister Shivraj Singh Chouhan was back in the saddle. He got the erstwhile Congressmen who had joined the BJP to contest elections and then rewarded them with ministerial positions.

Points out Aswal: “The river of power politics seems to be a great cleansing purgatory where the stains of defections are rewarded as heroic exploits.  The voters too seem to forgive and forget as all the defectors in MP got re-elected.  It all depends how the political parties forge their new narrative at each electoral battle to win over the voters. This also reinforces the view of some jurists who believe that Anti Defection Law is undemocratic and promotive of dictatorship and therefore should be repealed altogether.”

When Chaksu Roy, head of the Legislative and Civic Engagement at PRS Legislative Research says that the constitutional provisions related to the Anti-Defection Law have been reduced to a joke, he has a moot point. Just see how it has not helped to stop numerous governments from being toppled ever since it was enacted. The law was to deter MLA’s from defecting to another party after elections so as to improve their prospects or for some gain.

If they were declared defectors, they would lose their seats in the legislature. They would also not be able to take oath as a minister for six months.

How does something like this help democracy grow and flourish? Or even encourage dissent against a seemingly popular stand or policy?

Political parties, as we have seen time and again, have become adept at bypassing the anti-defection law. We have seen numerous times how democratically elected governments have collapsed as opposition parties have enticed those in the ruling party to switch loyalties. If that is so, why have such a law. It is time it is scrapped or reframed.

See how the governments in both Karnataka and Rajasthan in recent times had to shift their MLAs to faraway resorts so that they can be watched and not poached. If there was a realistic Anti-Defection Law, this would not have been necessary.

In Rajasthan, Chief Minister Ashok Gehlot succeeded in ensuring that he kept his flock together after it was on the brink of collapse as some of his party members under the leadership of Sachin Pilot were threatening to leave. If that had happened, the BJP would today have managed to capture power as they did in Manipur and Goa despite not having adequate numbers.

Political parties have over the years learned to manipulate the law and find loopholes to escape it. There is a law that says that anyone convicted with a prison term of over two years cannot contest elections. But political parties merrily give tickets to candidates who face serious criminal charges that are pending before the courts as there is no law that stops them from doing that.

Unless political parties swear to scrupulously follow a code of conduct where it would not compromise on principles to grab power and not allow the will of the electorate to be diluted, no anti-defection law will work.

India has a peculiar brand of politics and most of it does not respect democratic values and institutions. This is why just having a law is meaningless as political parties will find a way to skirt it.

Raw ambition and easy corruption have ensured that politics today has degenerated into a business and not a vocation to serve the electorate or build the nation.

(Ramesh Menon is an author, documentary filmmaker, educator and editor of The Leaflet. The views expressed are personal.)