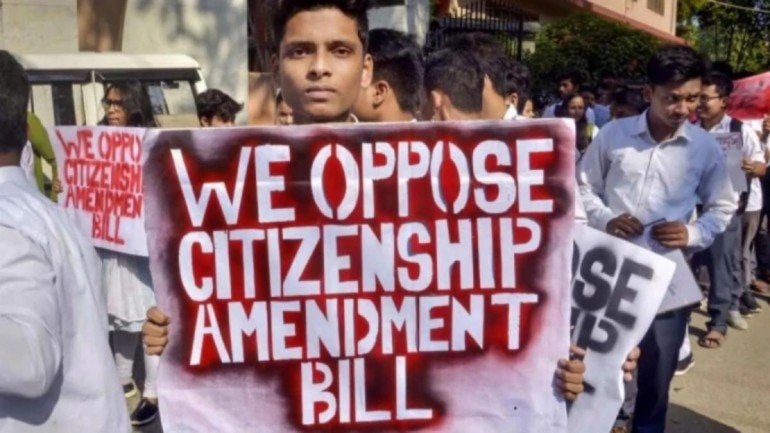 OVER 20,000 students of the Aligarh Muslim University (AMU) are going to sit on a hunger strike starting today. The students are protesting against the ‘The Citizenship (Amendment) Bill, 2019’ that was passed in the Lok Sabha on December 9. It is being discussed in the Rajya Sabha today.

As per the information, in AMU, all the dining halls in various hostels are locked by the students and all the residential students are on hunger strike in protest against the citizenship bill.

Tazeen Junaid, a student at English Department in AMU, told The Leaflet “in order to embark on our protest against the arbitrary citizenship bill, the students of AMU, all 25,000 of us together, are going for a hunger strike by boycotting a day’s dining”.

On December 10, thousands of students and some teachers of AMU also participated in a protest against the Citizenship Bill.

The student said, “they resolved to reject the Bill” and “ready to challenge it at all public fora”.

Speaking to The Leaflet, Mohd Kumail Haider, a law student from AMU, said “the amendment Bill runs against the spirit of Article 14 thoroughly. It is comical to witness the Union Home Minister using reasonable classification to defend the bill. Reasonable classification needs to be meted out on two tests of intelligible differentia. The bill not only falls flat on these tests but also engages in the irrational classification of persons, from arbitrary action, and from treating people unequally for no legitimate reason, the Citizenship (Amendment) Bill manages to violate each of these three principles”.

Another law student Mohd Zeeshan told The Leaflet “The CAB is manifestly arbitrary, and extremely discriminatory, subverting Articles 14 and 15 of the Constitution. Hence, it is brazenly anti-constitutional. Our anti-colonial nationalism and the socio-cultural, geographical, linguistic, ethnic diversities necessitate and inspire for citizenship NOT at all based on any such primordiality. That must NOT be based on faith. Therefore, the whole premise on which the CAB rests smacks of a concerted move in not only disenfranchising Muslims but also subject them to all kinds of persecution envisaged by Golwalkar and Savarkar. Even more grotesque aspect of the CAB is that it is the state and its bureaucracy, which will define who is entitled to be a citizen. Thus, even non-Muslims are equally vulnerable. This much of state- intrusion in itself is a precipice for horrific disaster”.

Following the protest against the citizenship bill, an FIR under Section 144 (Joining unlawful assembly armed with a deadly weapon), 147 (Punishment for rioting), 188 (Disobedience to order duly promulgated by public servant) and 353 (Assault or criminal force to deter public servant from discharge of his duty) of Indian Penal Code has been filed by the District Administration against 20 named and 500 unnamed students of AMU.

The Superintendent of Police (City) at Aligarh said that the students did not seek permission from the city administration.

The students have also given a show-cause notice to the Vice-Chancellor, Tariq Mansoor, and professors, seeking reasons for their silence on the Citizenship Bill, 2019 and the proposed nation-wide National Register for Citizens (NRC) scheme.

The students in their notice stated that: “We, the students of AMU declare that either you join the movement against Citizenship Bill and stand with us as we raise our voices or we will consider you as collaborators with the establishment”.

They also pointed out that time and again AMU students have been served with arbitrary show-cause notices and even FIRs, for dissenting on issues of national importance.

“In recent times, we (students) have seen it in the AMU campus that students have been served with unnecessary show cause notices whenever dissent has been shown against the establishment of the day, hence the students of AMU collectively have issued an informal SHOW CAUSE NOTICE addressing the faculty members of the varsity, to open up amidst the protest against Citizenship Bill and NRC, or they would forever be remembered as collaborators with establishment who inflicted a deep wound to the constitutional ethos and spirit of this nation”, said Wardah Beg, a law student from the university.

Also read: Citizenship (Amendment) Bill, 2019: Discord with the Accord

Also read: Why the Citizenship (Amendment) Bill, 2019 is unconstitutional