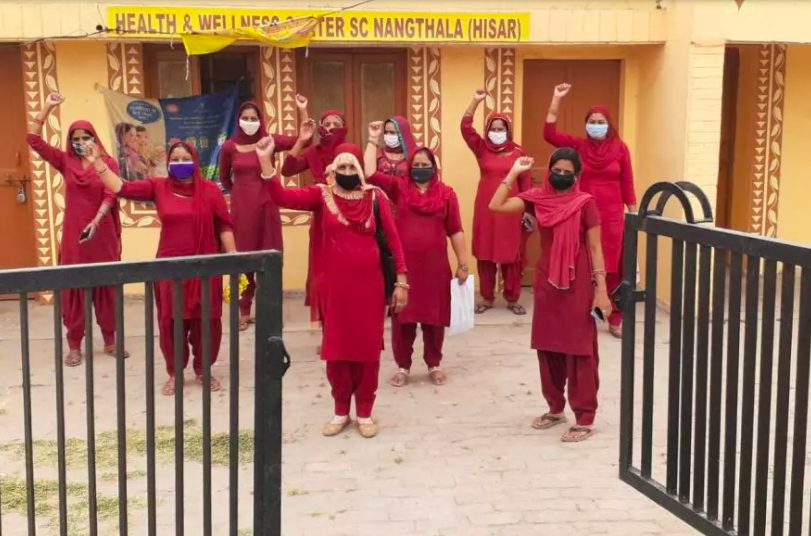 Among Reasons That Forced ASHAs to Strike: No Safety Gears, Pending Wages

On Monday (May 24), lakhs of Accredited Social Health Activists across the country, who have been assisting the government in its fight against the COVID-19 pandemic as frontline workers since the last one year, abstained from their duties for a day in protest and to demand their pending payments along with protective gears and a monthly risk allowance for themselves.

In a statement on Monday, the All India Coordination Committee of ASHA Workers (AICCAW), a federation affiliated with the Centre of Indian Trade Unions (CITU) said that the strike was total in states including Andhra Pradesh, Haryana, Madhya Pradesh, Maharashtra, Punjab, Telengana and West Bengal. While ASHA workers and facilitators from a few states such as Assam, Gujarat, Kerala, Uttar Pradesh and the Union Territory of Jammu & Kashmir, observed protest day, in other states the strike was partial.

A.R. Sindhu, secretary of the CITU, said that the ASHAs “were forced” to go on strike on Monday to raise their long pending demands. A similar nationwide two-day strike by ASHAs, along with other National Health Mission scheme workers including Anganwadi, mid-day meal workers, among others, was also staged last year.

According to Sindhu, since the resurgence in COVID-19 cases this year, the ASHA workers’ coordination committee has “written three letters” to the Centre regarding the need to “strengthen” rural healthcare resources by “regularising” ASHAs into the workforce.

“But we have received no response as yet,” Sindhu told NewsClick on Monday, stressing that the union will continue to fight for the rights of ASHAs in the country.

The AICCAW statement added that ASHA workers and facilitators will join the all India protest along with other trade unions and will observe black day on May 26, 2021, as per the call of central trade unions and the Samyukt Kisan Morcha.

‘NOT RECEIVED FULL PAYMENT THIS YEAR’

Sunita, 40, tells a common story. The 2000-odd residents in her village, Haryana’s Katlupur, are all gripped with panic these days as the second wave of COVID-19 infection ravages this part of Sonipat district with additional strain on healthcare resources and the consequent surge in deaths.

The mother of two, who stays with her husband, isn’t spared from this fear. But unlike others, she is does not have a choice – both out of responsibility and economic compulsions – to lock herself in the house in an attempt to ward off the risks of getting exposed to the virus.

Around 40 striking ASHAs from Sonipat district had gathered to demonstrate on Monday. As per the AICCAW statement, protests were organised at over 5,000 places, including sub-health centres (sub-centres) and primary health centres, in 300 districts at the call of AICCAW. The statement added that unions affiliated to various trade unions also joined the protest and strike in many states.

Protesting women submitted memorandum enlisting their demands to local authorities at respective protest sites. At some places, owing to the lockdown restrictions, online meetings along with social media campaigns were organised to bring to the fore grievances of ASHAs.

“We ASHAs are, without any hesitation, helping the local Health Department here in restricting the spread of coronavirus disease (COVID-19). Our duties are being lauded – even by (Prime Minister) Narendra Modi himself. Yet, our rightful demands remain unheard,” Sunita lamented while speaking to NewsClick over phone from Sonipat Civil Hospital.

In Katlupur, Sunita, accompanied with two other ASHAs, is normally involved in community development through healthcare awareness and increasing utilisation of the existing health services in her village.

But these days they are engaged, said Sunita, in facilitating villagers’ access to testing and vaccination services, while contract tracing the COVID-19 patients in the village – all “essential” work that cumulatively translates into gruelling workdays extending up to 10 to 12 hours each day.

Yet, since January this year, Sunita has been receiving a meagre “Rs 2,800” monthly. “We have been demanding to increase our monthly payments since many years now. When corona (virus) came last year we thought the situation would improve,” Sunita said. However, it only worsened.

Engaged under National Health Rural Mission (NHRM), that was launched in 2005, ASHAs are envisaged as community health “volunteers”, not workers, and are entitled to task/activity-based incentives over and above a monthly fixed minimum “honorarium”, not wages.

In Haryana, the monthly “honorarium” is fixed at Rs. 4,000, over which the state government pays an additional 50% of what an ASHA worker-volunteer would make as an incentive. The latter is paid by the Centre from the NHM funds.

Additionally, last year, the Narendra Modi government announced another incentive of Rs 1,000 per month for ASHAs engaged in the country’s COVID-19 response.

Since the start of this year, Sunita has only received her task-based incentives – Rs 2,800. The monthly “honorarium” and the additional payment announced by the Manohar Lal Khattar – led state government, along with Centre’s COVID-19 incentive allegedly remain pending for at least four months now.

Surekha, general secretary, Haryana ASHA Workers’ Union, told NewsClick that such delays are being experienced by ASHAs throughout Haryana. “There are about 20,000 ASHAs in the state and none of them have received their full payments since January,” she claimed.

IN ABSENCE OF PPE KITS, ASHAS PUTTING HEALTH AT RISK

Miles away, in Karnataka, D. Nagalakshmi, state secretary fo the All India United Trade Union Centre (AIUTUC)-backed ASHA Workers’ Union shared a similar grim picture of the state of affairs. The 42,000-odd ASHAs in the state are awaiting for their “honorarium” – Rs 4,000 – for past two months, she alleged, while speaking from Bellary district.

What’s more, the ASHAs are only provided with “masks and sanitisers,” and not with protective personal equipments (PPEs), according to Nagalakshmi. “Due to this lack of safety provisions, more than thousand ASHAs in Karnataka till now have got infected with COVID-19, while five have succumbed to COVID-19 in one month in April,” she said, adding that last year this number was “over 12”.

Given the apparent risks, the union, said Nagalakshmi, on Monday demanded risk allowance for the ASHAs in the state – a demand that was also raised by the CITU-backed ASHA’s coordination committee at the national level.

Moreover, last year, the Centre had brought ASHAs under the fold of Pradhan Mantri Garib Kalyan Package Insurance scheme last year. The insurance scheme, introduced for all healthcare workers, provides life insurance cover of Rs. 50 lakh in case of death due to COVID-19.

“But only one ASHA worker in Karnataka has so far received the amount,” alleged Nagalakshmi, in what could be considered as a snapshot of the neglect that the ASHAs are facing across the country.