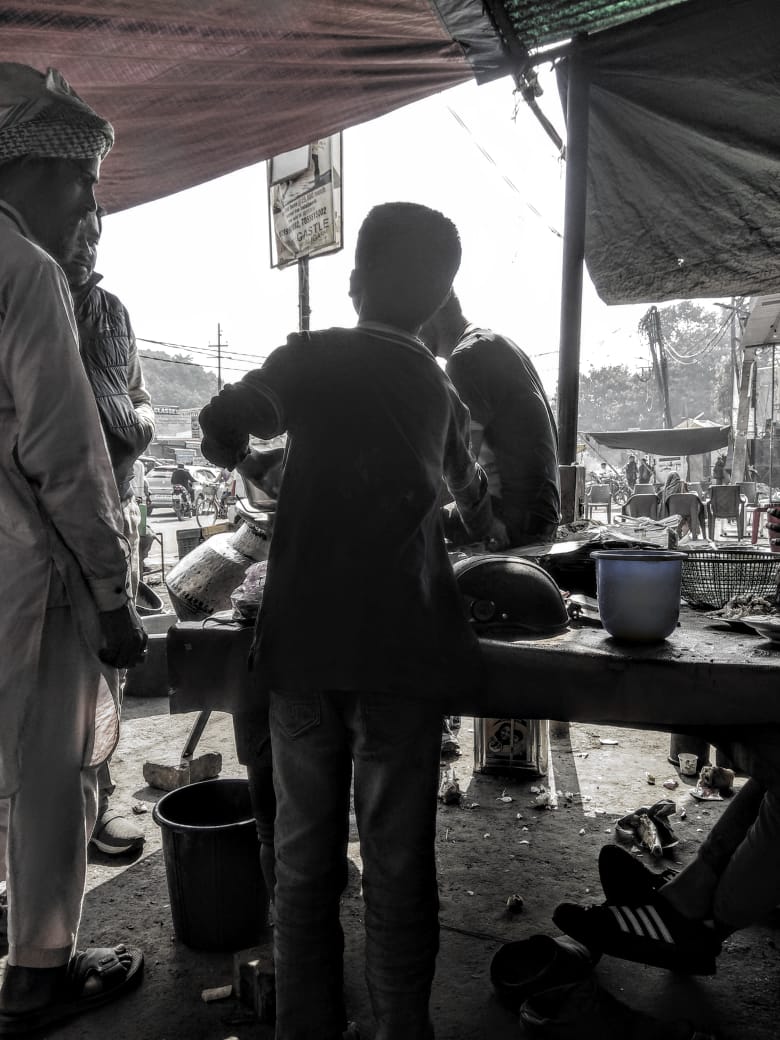 The right to education is a fundamental right under Indian Constitution. Yet we know of many underprivileged children forced into child labour by their circumstances, stripped of their childhood and their right to education. The authors interacted with children employed at dhabas near Aligarh Muslim as well as dhaba owners to understand the ground realities of child labour and the impact of education laws to the lives of children in India.

As we enter Aligarh, the town historically famous for the Aligarh Muslim University through its Chungi Gate, we find a number of tea stalls, or dhabas, that are sprawled all around the campus.

Asad, a twelve year old, has been working at the Nazim Dhaba for the past two years. He manages to make around Rs. 100-120 per day.  His typical day starts at 10 am and it ends only at  11:30 pm. He reminisces about going to a government school. As he hastens to get back to work with three empty glasses in his hand, his eyes glow with the very thought of going back to school one day.

“For Mohammad, education seems like a distant luxury when he thinks of the poverty that his family battles with.”

Thirteen year old Mohammad works at the Ballo Dhaba. He easily figures out whether the customer would prefer a glass or a Kulhad (clay glass) to serve tea. Mohammad had to drop out of a government school. He too, like others, smiles at the very mention of the opportunity to study again. “Agar ye chhoden tho,” (If only I leave this job)  he says, referring to the cobweb of difficulties he’s stuck in.  He’s too good a labourer at too little a wage for the employer to let him go. The children are paid a wage of Rs. 80-120 on a daily basis. This is in stark contrast to adult wages of around Rs. 400 to Rs. 500 for the same job.

Majority of them are willing to go to school if an opportunity is given. One of them even said that such an arrangement would be possible only if his employer would allow him to leave the dhaba. For Mohammad, education seems like a distant luxury when he thinks of the poverty that his family battles with.

However, ground realities of the state of education are grim. The situation of government schools in Aligarh is very poor. The state has drafted many schemes but they find little implementation. Education schemes were not advertised and it was no wonder that most of the children did not even know of any such scheme they could avail of.

“However, ground realities of the state of education are grim.”

Child labour was prohibited back in 1986 and the Right to ‘Compulsory’ Education was introduced in 2002 by the Constitution Eighty Sixth Amendment Act, 2002.

Yet children still find it difficult to pursue their basic education. During this small survey, it was observed that most of the dhaba establishments were not complying with the rules and regulations under the Child Labour (Prohibition and Regulation) Act, 1986 (CLPR Act). Section 2B of the rules clearly states that school hours should not be compromised even if a child is working to help the family. Section 11 of the Act obliges the establishment to maintain a register to monitor the basic workings hours of the child along with the pay, also Section 17 of the Act vests a duty on the local inspector to keep a regular check on such establishments which might employ children.

A nationwide study by V V Giri National Labour Institute of the CLPR Act observed that in Uttar Pradesh most of the accused were acquitted under the Act due to lack of documents related to the child. Hence, it is required that such registers should be maintained because not only they ensure safe education, but also they act as proof in the court of law.

“The state of Uttar Pradesh has been granted Rupees 1420.72 lakhs under this scheme. “

The state should also ensure the implementation of National Child Labour Project (NCLP) effectively. Under this project, the main object is to rescue the children in the age group of 9-14 years from being pushed to work. They are admitted into NCLP Special Training Centers, which provides bridge education, training and healthcare. The state of Uttar Pradesh has been granted Rupees 1420.72 lakhs under this scheme.

The children have been deprived of their right to education, despite having laws in place. Is it the failure of the state or the local officers who are vested with such duties?

“Most children were unaware about such schemes, policies, even the concept of mid-day meals. “

Child labour is not only about the child being forced to work, but also the child is being deprived of basic education which is guaranteed by the Constitution itself.

This whole cycle of child labour needs a comprehensive integrated approach and education should on the top of the list. As Justice Bhagwati observed in Sheela Barse v Secretary, Children Aid Society & ors (1987 SCR (1) 870):“ If a child goes wrong for want of proper attention, training and guidance, it will indeed be a deficiency of the society and of the Government of the day.”

Inspectors should ensure that such employers are maintaining the registers and relaxation for schools hours is being given.  The local authorities should also give priority to government schools. Most children were unaware about such schemes, policies, even the concept of mid-day meals.

Out of 13 dhabas, surveyed, only one was found where there were no children at work. Ali, the owner of the dhaba admitted he could increase his profit by employing children instead of adults but said “Ye sahi nahi lagta. Baccho ki umar hai khelne aur padhne ki.” (This does not seem right. Children are meant to study and play)

(The authors are law students at Aligarh Muslim University. Views expressed are personal.)
All pictures credit to authors. Names of children have been changed.