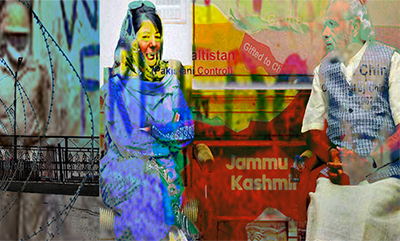 A problem called Kashmir: Not more autonomy but grave emotional disconnect at the root of current quagmire

[dropcap]W[/dropcap]ith the parting of ways by the BJP and the PDP, the State of Jammu and Kashmir has been brought under Governor’s rule under Article 92 of the Constitution of Jammu and Kashmir. This article enables the Governor to assume to himself the functions of the government and the state. It also empowers him to assume the functions of the legislature, which means the governor can make laws during this period. The life of a proclamation is only six months, which cannot be extended. During this six-month period, the governor can try to have a government formed, or fresh elections can be held. In any case, the President’s rule will have to be imposed after the expiry of six months in case neither development is allowed to occur.

But it must be remembered that the term of the current Assembly has not expired. Under the Representation of People Act, 1951, a general election is held before the expiry of the term of the existing Assembly. In case of premature dissolution, election are required to be held within six months of the dissolution. Since J&K is under the Governor’s rule now, the Assembly does not have to meet before the completion of six months because the proclamation has suspended the relevant constitutional provision. If the Governor feels that elections should be held, then the Election Commission (EC) will conduct it accordingly. If not, after six months the President will take over the administration under Article 356. The President’s rule, however, cannot be extended beyond one year. It can be extended beyond one year only if, one, there is an Emergency in operation, and two, the EC certifies that it is not possible to hold any election.

It is, therefore, not possible to postpone elections to the Kashmir Assembly indefinitely. It can be held within the next six months, or it can be held along with the general elections to the Lok Sabha, scheduled to be conducted in May 2019. Legally and constitutionally, both options are okay.

The Constitution of Jammu and Kashmir is central to the scheme of autonomy designed under Article 370 of the Constitution of India for Jammu and Kashmir. Article 370 is the product of the instrument of accession between the Maharaja of Kashmir, Hari Singh, and the government of India on the basis of which Kashmir acceded to the Indian Union. On the passing of the Indian Independence Act 1947 by the British parliament, British suzerainty over India ceased to exist on the midnight of August 15, 1947 and thereupon all the princely states became independent. They could either join India or accede to Pakistan.

Jammu and Kashmir did not immediately join the Indian Union. It did so only when the Pakistani raiders invaded Kashmir and the existence of the princely state seemed to be in danger. The instrument of accession which was signed between Maharaja Hari Singh and the Government of India contained the scheme of relationship between the state of Jammu and Kashmir and the Indian Union. The most important and unique part of it is a separate constitution for the state.

What is the rationale behind a separate constitution for the state of Jammu and Kashmir ? On a  surface view, it is an extraordinary concession given to a state of the union. But the situation created by the Partition of the country, the generally favourable attitude of the common people of Kashmir towards India and a general willingness to join India, the favourable role played by the popular movement led by Sheikh Abdullah in this regard, and, above all,the fact that Kashmir borders a hostile Pakistan — are factors which went into granting a higher degree of autonomy to Jammu and Kashmir. Thus, the instrument of accession signed by the ruler of Kashmir and Government of India laid the basic framework for that autonomy.

The granting of autonomy on the basis of the instrument of accession was the response the democratic India gave to a special group of people who wanted to join Indian Union and at the same time wanted to retain a greater degree of political power. It was an extremely sensitive response by the wise leadership of India to a very volatile and fraught situation. Any crude and sequacious political leadership would have tried to homogenise the federal arrangements between the Union and the States, without caring for the uniqueness of the people inhabiting different regions of the country. The scheme contained in the Article 370 and 371 is a reflection of the sensitive realisation by the political leadership which led the country in the formative years of the republic of the need to recognise the subnational aspirations of different regions.

An important point needs to be made here on the question of special status of Kashmir. Separate constitution is an issue which has raised many eyebrows then as well as now. The Indian leadership, being deeply committed to democracy, could not have bestowed finality on the agreement between a Maharaja and the Union government without the involvement of the people. The endorsement of such an agreement by a Constituent Assembly elected by the people of Kashmir was therefore thought necessary.  The instrument of accession affirmed that Jammu and Kashmir is an integral part of India. The Constitution of Jammu and Kashmir (Article 3) re-affirms it by saying: “The State of Jammu and Kashmiris and shall be an integral part of the union of India.” Thus, the accession of Kashmir to India became final and irrevocable.

Now let us take a look at the contours of the special status of Kashmir. Part XXI of the Constitution of India contains temporary, transitional and special provisions. Article 370 is a special provision and not a temporary provision, which sanctifies the conditions contained in the instrument of accession. It says the following: (i) a constituent assembly will be formed to make a Constitution for the State of J&K; (ii) the power of Parliament to make laws for the state of Jammu and Kashmir will be limited to the matters specified in the instrument of accession; (iii)the President of India, in consultation with the government of the state, will declare which matters in the Union list and Concurrent list will correspond to the matters in the instrument of accession; (iv) in regard to other provisions of the Constitution, they will apply to the state as the President may order — he can make exceptions and modifications while so applying those provisions; (v) in regard to all such matters other than those specified in the instrument of accession, they can be made applicable to the State by the President only with the concurrence of the Government of the State; (vi) the President can annul Article 370 through a notification. But he can do so only on the recommendation of the Constituent Assembly of the state.

A couple of examples will show the nature and extent of modifications and exceptions made by the President. The parliamentary law on preventive detention does not apply to Jammu and Kashmir. It will have its own law on the subject. Similarly, with regard to the reasonable restrictions provided for in clauses 2, 3, 4 and 5 of Article 19 dealing with fundamental right to various freedoms, only such restrictions which are imposed by the State Legislature will apply to the state. In other words, a law made by Parliament imposing reasonable restrictions on any of these freedoms will not be applicable to Jammu and Kashmir.

Kashmir has emotionally moved farther and farther away from the Indian mainstream. | Photo credit: Rising Kashmir

Similarly, the presidential order introduces a new article, namely Article 35A, in the Constitution of India — which declares that the state law relating to the permanent residents in Kashmir and their special rights shall not be void, notwithstanding anything contrary to it in the Constitution. There is another interesting modification which had been made by the President. Article 365 says that if a state government does not comply with a direction issued by the Union government in exercise of its executive power, it can become a ground for invoking Article 356 and impose President’s rule. This Article does not apply to Jammu and Kashmir because it has been deleted by the Presidential order.

There are many other examples of state autonomy provided under Article 370, but there is no need to go into all that. Suffice it to say that Jammu and Kashmir has been given a fair amount of autonomy, considering its uniqueness and also important political as well as strategic factors.

The Kashmir ‘problem’ is emotional

Then what is the Kashmir problem all about ? It cannot be a demand for more autonomy as nobody in Kashmir has specified it so far. The real problem is emotional. Kashmir has emotionally moved farther and farther away. So the real challenge is how to bring it back and re-establish the emotional bond with the rest of India. Kashmiris culturally, historically and emotionally a part of India. How a democratic India allowed this emotional break to happen is a disturbing mystery. Indian democracy does not and cannot harbour majoritarian impulses. The parents in Kashmir are as much concerned about the education and future of their children as we are concerned about our children. The grief of Kashmiri parents who lose their young sons to bullets is genuine. Their loud wail should stir up our conscience.

The first thing that should be done by our civilised society is to rediscover the empathy with Kashmir’s pain. This empathy should not be allowed to be lost in retributive vendetta. Myopic politicians have brought Kashmir to almost an irremediable situation. Politics which completely lost its moral anchorage and vision has played ducks and drakes with the Indian society. The result is that when serious problems confront us we remain clueless. Kashmir has suffered primarily because we are basically clueless. It is not one interlocutor that should be sent to Kashmir. Maybe we should send one thousand or may be more who should demonstrate to ordinary Kashmiris that we care. Indian democracy alone can give them enough space to realise their dreams. Can we convince the traumatised Kashmir about the truth of it? If we can, then the solution to the Kashmir problem will begin to emerge.