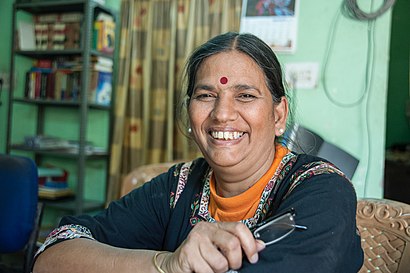 A Peek into the Life and Journey of Sudha Bharadwaj

Through a series of interviews with Sudha Bharadwaj, PUCL shows the grim reality of the people fighting in tribal areas for the land they own. The book titled ‘A LIFE IN LAW AND ACTIVISM: SUDHA BHARADWAJ SPEAKS’ shows her journey into fighting for the rights of people, her cases and the story of the people affected by these laws. The book will be launched in PUCL’s webinar ‘Why is the state scared of Sudha Bharadwaj’ on January 24 with The Leaflet as its media partner. The following are edited excerpts from the book.

As a matter of strategy, going to the civil courts due to tribunalisation and how it has happened, it is not easy to go to certain forums. You can’t appeal against every order. But following a civil suit strategy of going after certain officials, under the prevention of corruption act or something like that…. Does that kind of strategy figure?

One day, we had gone to the judicial academy and had seen all the judges’ portraits put up. We thought we should have all the portraits of our petitioners, who are very remarkable people put up. Ramesh Agrawal is one of them.  Recently, there was an attack on Ramesh, but he escaped with his life, fortunately.

Brigadier KK Chopra, of Angun fame, has been arrested in that case. He (Ramesh) opted for a civil suit (praying for grant of a declaration that the appellant had illegally set up industry in Raigarh and ordering the industry’s closure).

Now, very interesting, the civil suit was blocked by Monnet as it was against Monnet Steel. Monnet Steel said that the Water Act and the Air Act have barred the jurisdiction of civil suits, which is wrong interpretation of the Acts’ jurisdiction. They have barred civil jurisdiction for orders passed by the pollution boards. Going for environmental damages in civil suits is perfectly legal. So, they actually used this, got a stay, then went somewhere else, and mixed him up in so much litigation.

But all these situations demand that the judges stand up to the corporates. It is a very difficult task. I was invited to the National Judicial Academy to lecture the judges on labour law, and I remember Prof. Mohan Gopal was the director, who told the story of Judge Deb, who was in Bhopal. For the first time in history, did something against Union Carbide, and got interim compensation for Bhopal Gas victims.

And loads of lawyers were coming from Mumbai and Delhi to argue for Union Carbide. He just stuck his ground. And he said, okay, go to the High Court. And his order was upheld right up to the Supreme Court. They used a civil court strategy and got interim damages. So (Laughs) he was a brave judge. He didn’t last long at Bhopal. He was transferred.

BEING A LAWYER AND AN ACTIVIST

You have been an activist all your life, and you have been a lawyer for just the last twelve years, this is quite remarkable. How has your relatively newfound career as a lawyer affected your approach towards activism? Do you find yourself to be more discerning in the cases you represent? Do you look for things that you didn’t find before, in terms of whether it is a legally tenable case? Do you see that change in your perception?

I think it has helped. Because you have the strategy of the struggle and the paperwork strategy. We need to develop greater expertise in both actually. And I think, definitely, yes, being a lawyer has improved my expertise in terms of paperwork. In the sense that it is not enough if justice is on your side. It also has to be there in the documents. The perfect example of this is our interaction concerning the Gullu dam being built in Jashpur.

I remember interacting with them. And as a lawyer, I said that I wanted to see their land acquisition file. They had told me the whole story and how they had taken out many rallies to the collector. Initially, the collector had said that I don’t know anything about this. Several rallies had happened and several memoranda given to the collector.

We need to develop greater expertise in strategy of struggle and the paperwork strategy.

So, he gave a report of complete consent?

No, he said that no objections, so go ahead with Section 6. One thing that I find is that people go on representing to all sorts of people, to the Prime Minister, to the Chief Minister, to this one, to that one, and the place where this thing is slowly, slowly creeping forward, they are not able to intervene at that point. Our sensitivity to this has much improved after becoming lawyers. I realise that this is the way the thing works.

In Janki Sidar’s case, Section 239 for example, I told you that a case was going on for eleven years, without a signature, without a vakalatnama, without a memo of that non-existent Adivasi. For eleven years it was going on. Now, these poor people were going on writing letters to the collector. All those letters were just put at the back of a file. But nowhere has it been recorded that Janki Sidar gave an application, that (the Adivasi) person does not exist thereby kindly dismiss the case.

All because she had always written, Prati Shriman Jiladhish (addressed to ‘the Hon’ble Collector’). She had not written Samaksh Nyayalay Shriman Jiladhish (addressed to ‘the Court of the Hon’ble Collector’). That is, (she had written to the) collector in his administrative capacity and not in his judicial capacity. Now how is she supposed to know? These are the tricks they play on you.

As a lawyer, there are tricks played one after the other and you soon start to realise this.

At least, when you become a lawyer, you realise these are the tricks that happen. It is a different matter that some other trick will be played when you get over this trick. But at least you can help people. So that has been an improvement. It tends to legalise you a bit too much, sometimes. You are always thinking, that accha, now this will happen, now that will happen. You are looking at it from the perspective of a court.

(People’s Union for Civil Liberties is a human rights body formed in India in 1976 by socialist leader Jayaprakash Narayan.)