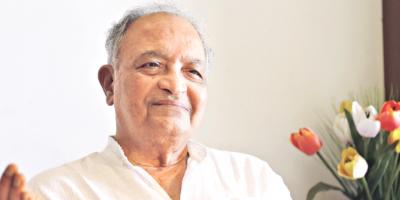 Within the hurly burly of day-to-day developments one often tends to sideline judicial personalities who had a distinct impact through remarkable consistency, dedication to causes they believed in and a sympathy they had for the downtrodden and the exploited. One such personality who stood by his principles throughout his life was former Justice P.B. Sawant, who passed away on February 15 this year at the age of 90, after having led a complete life.

Sawant made a distinct mark not only in the judiciary but injected new life into a sinking Press Council of India as its Chairman, a role in which he fought hard to give teeth to the organisation even as governments and vested interests tried their utmost to reduce it to nothingness. He stood out as a gentle and firm colossus when it came to human rights, and human wrongs, or upholding secularism and siding with journalists fighting against increasing inroads into freedom of the press and journalistic conscience.

It would be wise to recall what he told the International Press Institute way back in 1998, at a time when various forms of independent media are under attack, especially independent digital media outlets. “We in this country do not believe only in one model of ownership structure. The very first sentence of the Preamble to our Constitution, which incorporates the ideals of this nation reads as follows. ‘We the people of India, having solemnly resolved to constitute India into a Sovereign Socialist Secular Democratic Republic and to secure to all its citizens…Further, Article 51 A of our Constitution, which enumerates fundamental duties of every citizen obligates him, among other things, to abide by the Constitution and respect its ideals and institutions.”

“Our country is not, therefore, a haven only for private owners. As far as our information goes this is also the situation in many other countries. There are companies running newspapers in some countries which have journalists and non-journalist employees as majority share holders. Such outfits running newspapers is neither a novel concept nor is it opposed either to law or to the ‘market’ on whose behalf you have chosen to speak. The only difference between a company and a co-operative society under our legal system is that in the latter case there is a ceiling on the declaration on dividend on shares, the rest of the profit being ploughed back into the institution itself for its further development. Is it suggested that any institution can prohibit such organisations from being its member? Is there apartheid practiced in any institution, including yours, on the ground of the ownership structure?”

In journalistic parlance he adorned the courts with some truly offbeat judgements, and the PCI with a rare flourish, often throwing gutsy punches in matters pertaining to freedom of the press and at times lambasting newspaper managements too for devaluing the institution of the Editor. He supported cooperative and other independent news ventures in India and abroad. The dangers of the contractual system in journalism, the adverse pressures on the profession and increasing communalisation and corruption could not escape his eagle eyes, even as he tried to carry the PCI to newer horizons. He was also the chairman of the World Association of Press Councils for some time and added his weight to the role.

His role within the PCI stood out in various interactions, interviews and even brief interludes that the writer had with him, both as a journalist and as an active interventionist in some cases, which was an education in itself. Significantly, in his last day of office, one had a face to face interview with him, ironically timed with a report on the future of the print media. It was one of my longest interviews with him, way back in 2001 for Frontline where I worked back then. He opined that no newspaper should publish exit-poll surveys, however genuine they may be, till the polls were over. This was because he believed that the media should not allow themselves to be used for distorting and manipulating the elections, and that it should not allow itself to be exploited by interested parties.

As I tried to argue in favour of exit polls, he countered that while there may be scientific exit polls based on wider samples, even they often lead to ‘cookalogy’. The remark was made in jest, or was it? He added that sometimes owners and their links with politicians could also play a role. On the question of a PCI report calling for a third Press Commission and its necessity, he said: “It is only after the Second Press Commission that the need to look at the entire media has been felt. We could certainly have had a media commission but such a recommendation from the Press Council would have been considered a matter beyond our brief. Therefore, we recommended a Third Press Commission. Surely, nearly two decades after the Second Press Commission, with the emergence of a global market and the media being in a state of flux, a third commission is a must. We have given detailed suggestions in this respect.”

It is a matter of record that he did write to the then I&B minister Sushma Swaraj with suggestions which remained under active consideration till they vanished into thin air with other options being attempted which led us to the present mess. When questioned on a Media Council being a must and suggestions to that end by various journalists unions, he said: “There should be one well structured media council. You can’t divide the media artificially. Both (print and electronic media) cover news and both are concerned with ethics. What will happen if contrary adjudications are given by two councils? It could lead to chaos. The doubts of some persons are misconceived; 17 countries have media councils now. Perhaps more ground could have been covered before the idea was floated. I don’t agree with the view that the council should be composed of and headed by journalists alone. How can journalists be both the prosecutors and the judges at once?”

Sawant was also known to be a true defendant of media rights. He was one of the judges in the landmark Supreme Court ruling of 1995 which stated that the airwaves are the people’s property and rejected state monopoly on airwaves. It permitted individual citizens to set up their own broadcasting media organisations and operate freely. While he was the chairman of PCI he was the one who introduced the idea of Right to Information (RTI). “Airwaves must be utilised for advancing public good. It is the duty of the State to see that airwaves are so utilised as to advance the free speech right of citizens which is served by ensuring plurality, diversity of views, opinions and ideas.”

It was indeed under his chairmanship of the PCI that before journalist Iftikhar Gilani’s case went to court he ruled that what was in the public realm could not be an official secret. He also infuriated press barons when he said that contracts in journalism could be an infringement on the freedom of the press at a time when waves of contracts replaced permanent jobs and threatened the every existence of wage boards for journalists and press workers.

There are also memories of his censoring of even The Times of India for communal and casteist comments in his tenure as PCI Chairman. The case was pleaded for the Delhi Union of Journalists by non other than another champion of people causes, senior advocate Hardev Singh, then president of the All India Lawyers’ Union. The case was jointly prepared in a jiffy with Mr. Singh traveling with us all the way to Mussoorie, where the council met.

As has been reported in tributes to him, he played a stellar role in the RTI which is now being reduced to nothingness. A meeting held by Justice Sawant in his capacity as chairman of the PCI was attended by senior members of Parliament (MPs) from across political parties. He made tremendous efforts to draft a law along with NGOs and others before it was sent to MPs and CMs of various states.

Today, it should be remembered that the Press Council Act, 1978, is a statute with express provisions to regulate newspapers, and that too without Government interference. Now the opposite is being tried; kill the messenger, specially the non-conforming digital media, even as the mainstream media is being cultivated through sops and by a carrot-and-stick policy. Lok Sabha TV and Rajya Sabha TV have been merged into a new Sansad TV. What is happening in PTI is reminiscent of the Emergency Samachar days and other employees of various agencies, like UNI, are barely getting by while Hindustan Samachar has been favouring the RSS. A few years ago Justice Sawant even commented on what was happening in the Press Council when its present Chairman virtually started drum-beating the Government line on attacks on journalists in Kashmir.

Among other things Justice Sawant was the chairman of the inquiry committee set up to investigate the charges against Justice V. Ramaswami, the first judge to face an impeachment motion in Parliament, in 1991, which some of us covered. While the committee found Ramaswami guilty of willful misuse of office during his term as the Chief Justice of the Punjab and Haryana High Court the, Lok Sabha could not muster a two-third majority vote required to remove him from office. As a result, Justice Ramaswami survived the motion, and retired in 1994. Justice Sawant found the system of impeachment of judges cumbersome and heavily dependent on politicians.

Among the landmark judgments which he authored as part of the constitution benches, the decisions in Mandal and S.R. Bommai cases stand out. In an interview he had once said that the appointment to all constitutional posts, including that of Governors, should be made by the President in accordance with the advice given by an independent body, and not by the Cabinet. He was reportedly of the view that the Constitution empowers the Centre to satisfy itself completely about the relevant facts in a state from sources other than the Governor.

In the last few years P.B.Sawant had indeed become a staunch critic of the ruling party and a fiery champion of civil liberties. He was particularly critical of the BJP government led by Narendra Modisince it came to power into 2014, particularly the targeting of media, cases of mob lynching and persecution of Dalits and other minorities. He is also known to have spoken against attacks on independent writers, social activists and the growing corporatocracy.

As a journalist one fondly remembers former Justice Sawant as a humanist who always stood firmly with causes he believed in, tried to fight for journalists rights and against attacks on their freedom. One can also vouch for the fact that he took major steps to ensure that the Press Council got rid of self-seekers operating in the name of journalism and ensured a place for working editors and others who could contribute to the Council. He is indeed missed today. Truly, it was a complete life, a purposeful one.

(The writer is a senior journalist. The views are personal.)

This was first published by Newsclick.