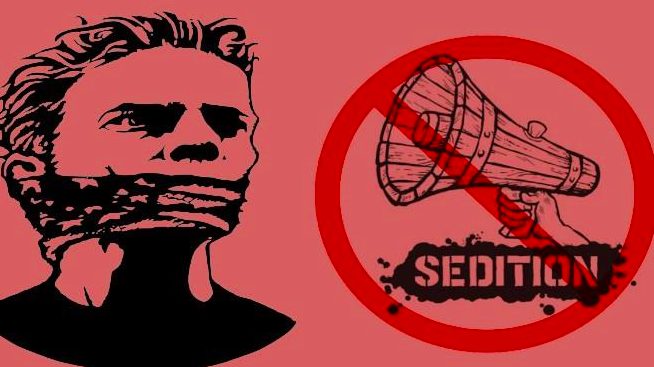 Recently, the Supreme Court issued a notice to the Centre on a PIL challenging the constitutionality of the provision of sedition in section 124A of the Indian Penal Code. It raised some piercing questions among people wedded to the Constitution, who are agitated by questions about freedom, democracy and the culture of dissent. Chief Justice of India NV Ramana wondered while issuing the notice how the colonial-era sedition law, enacted to suppress the freedom movement and used to silence leaders such as Lokmanya Tilak and Mahatma Gandhi, is necessary seventy-three years after independence. He observed that while the government is repealing many old laws, he does not know why the sedition law is not one of them.

The CJI’s interrogation into the persistence of the law on sedition captures the crisis in our democracy. In fact, there is a crisis because this law exists in the statute book and is frequently applied, misused and abused to suppress dissent and criticism of the regime led by Prime Minister Narendra Modi.

The searching questions asked by the CJI capture the views of Gandhi, expressed ninety-two years back in an article titled “Sword of Damocles” and published in Young India on 18 July 1929. In it, he refers to the incarceration of Satyapal, a freedom fighter from Punjab charged with sedition by the British government. He observes that section 124A hangs like the sword of Damocles over anybody involved in the freedom struggle. He presciently asks, “Where is the Indian, be he Liberal or Nationalist, Mussalman or Hindu, who is not knowingly guilty of sedition if Dr. Satyapal is?” These words ring true today when all—liberals, Hindus and Muslims and people from all walks of life and beliefs—are getting booked for sedition and thrown behind bars for exercising their constitutional right to question and criticise the government. If they express an opinion, the government deliberately interprets it as spreading disaffection against it.

India will be free if sedition law is repealed

In the same article, Gandhi demands the repeal of the law on sedition. He writes, “Dr. Satyapal’s incarceration therefore suggests a wide agitation for the repeal of Section 124A.” The spirit of what he wrote in 1929 is now finding robust and fearless expression in the form of legal challenges and demands from many other sections to abolish the sedition provision.

It is profoundly significant that Gandhi had categorically asserted that the repeal of this law would pave the way for Swaraj or the independence of India from British colonial rule. To him, this repeal was as important as ending the British regime and India attaining freedom.

He asserts: “…repeal of that section and the like means repeal of the existing system of government which means attainment of Swaraj.”

Insightfully, Gandhi notes that the “force required to repeal that section is the force required for the attainment of Swaraj.” His assessment is striking and implies that if the law against sedition persists in independent India, it means some form of colonial rule and mindset also persists. That is why the Chief Justice is right to ask how a colonial-era law that convicted freedom fighters in the name of seditious activities is necessary for independent India.

Today, several movements and individuals, including those who have filed legal challenges in the Supreme Court, can be seen as the “force” Gandhi talked about against the sedition law. Even students are demanding its repeal today. All these efforts manifest the force required to overturn this law.

During the 2019 general election, the Congress party manifesto promised to rescind section 124A. Some BJP leaders opposed this, saying that if elected to power, their party would strengthen it. Then Home Minister Rajnath Singh reportedly said the sedition law would be made so stringent if his party wins the election that even the thought of inviting this charge will “send shivers down the spine”.

Nevertheless, the force required to get the sedition law abolished is gaining momentum. Even the CJI seems aligned in favour of these forces. Yet countervailing regressive forces that support the sedition provision also exist. They remind one of the colonial vision, which is embedded deeply in the worldview of the party that promised to strengthen this law.

Still, the clamour from people wedded to democracy and freedom to repeal the law generates hope. Finally, a colonial relic would get consigned to the dustbin of history. The apprehension, however, is that this law might get diluted without substantively altering it.

No need to retain sedition law by diluting it

Gandhi cautioned in 1929 that there could be a “show of repeal” of the sedition provision, which amounts to retaining it “by a concealed route”. Calling it a “dodge”, he said it would not, nor should it, satisfy people.

Lately, Attorney General KK Venugopal has defended the validity of this law in the Supreme Court and offered “some guidelines” to curb its misuse instead. It is a clear example of the aforementioned “dodge”.

The sedition provision penalises people by employing vague definitions for offences, such as “disaffection towards government”. Therefore, Gandhi categorically said that the movement to repeal it must be strengthened until Indians “evolve a government for which we can have real affection, which we can call our own.” What he also said sounds poignant in today’s context. It was: “There will then be no sedition on a nation-wide scale.”

Tragically, people have elected governments since independence, but the sedition law continues and charges under it get filed ever more regularly. All it takes is criticism of the government or dissent against the regime. The online news portal, Article 14, recently examined the trend in sedition cases registered over the last decade. It revealed a 28% increase in registration of cases, especially against dissenters and critics, ever since Modi became the Prime Minister in 2014. It should explain why India ended up as a “partially free” country on a recent international ranking and gained the unenviable tag of an “elected autocracy” on another. Much of this decline gets attributed (along with other factors) to the callous and calculated use of sedition charges against critics of the regime.

In 1922, Mahatma Gandhi was charged with sedition and imprisoned for six years. He famously said, “Section 124A, under which I am happily charged, is perhaps the prince among the political sections of the Indian Penal Code designed to suppress the liberty of the citizen”. On 7 September 1924, Gandhi wrote in Navjeevan, “…criticism of the Government was considered sedition and hardly anyone dared to speak the truth.” These words resonate in 2021 when indiscriminate arrests and coercive State action for speaking the truth are gaining ground. The long-drawn legal processes once the section is applied itself constitute punishment without trial and conviction. In this context, the recent remarks of the Chief Justice, who questioned the perpetuation of this coercive colonial-era law, inspire hope.

Real Swaraj is to regulate power

Since Gandhi equated abrogation of the law against sedition with Swaraj, we must review his definition of Swaraj. He said in 1925, “Real Swaraj will come not by the acquisition of authority by a few but by the acquisition of the capacity by all to resist authority when it is abused. In other words, Swaraj is to be obtained by empowering the masses to a sense of their capacity to regulate and control authority.”

Repeal of sedition would have a far-reaching impact. It would regulate and control authority and give people the right to criticise their government and, as Gandhi always recommended, help turn the searchlight inwards.

The author was Press Secretary to President of India late KR Narayanan. The views are personal