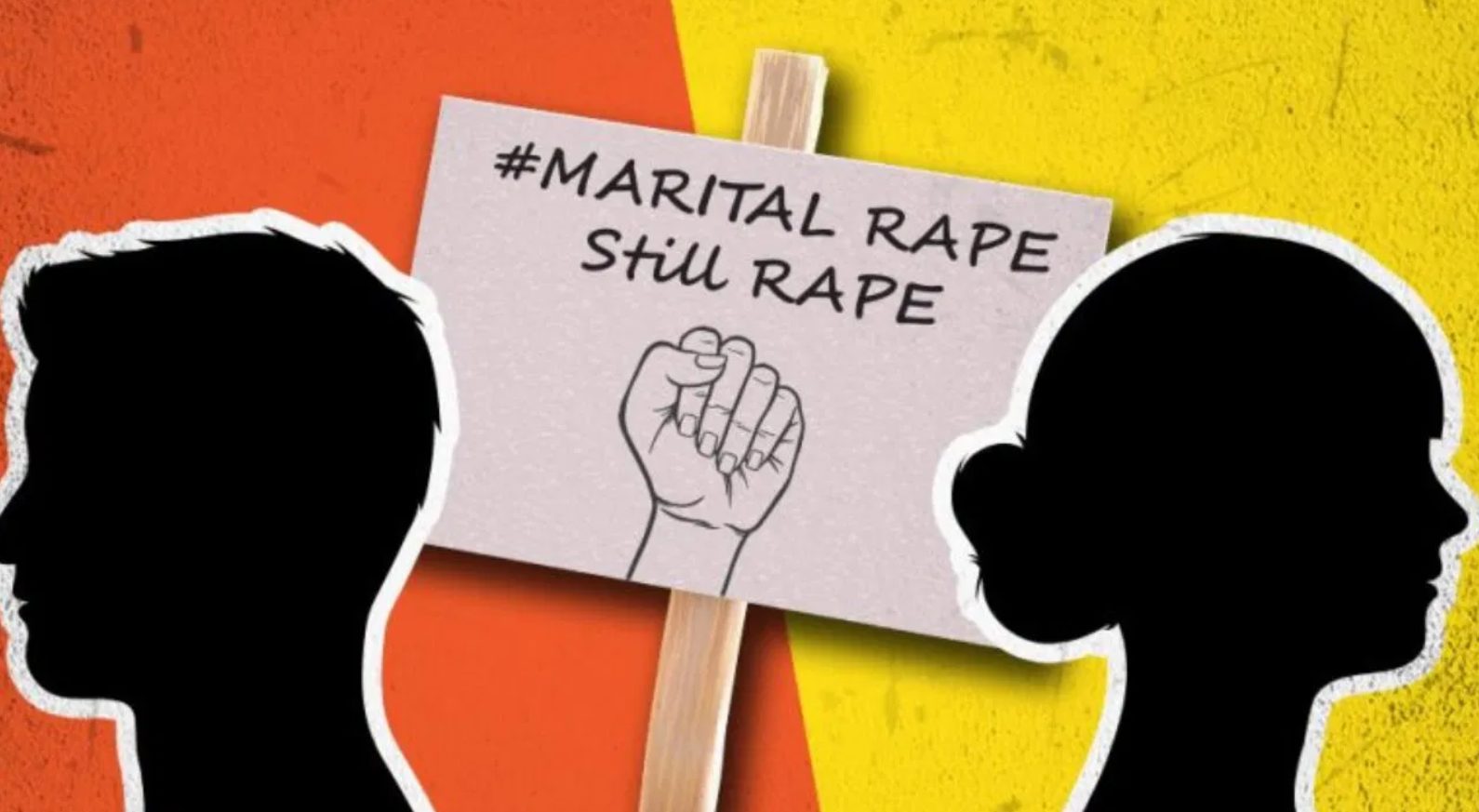 Analysing the recent conflicting judgements of the Chhattisgarh High Court and the Kerala High Court on the exception of marital rape provided in Section 375 of the IPC, YATIN GAUR argues that the law is in complete contrast with the spirit of the Indian Constitution, violating various facets of equal protection and the right to life and liberty clauses as enshrined in Articles 14 and 21, respectively, of the Indian Constitution.

IN recent weeks, courts have given conflicting rulings on marital rape resulting in renewed calls from activists to criminalise rape within marriage.

In a criminal case brought by a woman accusing her husband of “unnatural sex” and raping her with objects, the Chhattisgarh High Court pronounced that the “sexual intercourse or any sexual act by a husband with his wife would not constitute rape even if it was by force or against her wish”. The court based its decision on the exception laid down in Section 375  of the Indian Penal Code, according to which any act of sexual intercourse between a man with his wife, provided the wife not being below 18 years of age, will not amount to rape; thus, disregarding the elements of will, consent and health of the women. It only constitutes a crime when the wife is below 18 years of age or in the period of judicial separation; thus, not taking other aspects into account.

Contrastingly, the Kerala High Court ruled in a civil case that “a husband’s licentious disposition disregarding the autonomy of the wife is a marital rape, albeit such conduct cannot be penalised.” However, the same can be a valid ground for divorce as espoused in Sec. 13(1)(ia) of the Hindu Marriage Act amounting to physical and mental cruelty.

It must be noted here that the union Government stated in an affidavit in 2017 to the Delhi High Court that sexual intercourse within marriage should not be included as an additional ground for women to file for divorce.

The exception of marital rape provided in section 375 is a reflection of deep-rooted misogyny and centuries of discrimination, subjugation and objectification faced by women at the hands of the patriarchal society. Arguments have been advanced for the striking down of this draconian law on the premise that it stands in complete contrast with the spirit of the Indian Constitution, violating various facets of equal protection, freedom of expression and right to life and liberty clause as enshrined in Articles 14 and 21 of the Indian Constitution.

Article 14 of the Indian Constitution guarantees every citizen equality before the law. Any classification to pass the test of Article 14 must fulfil two valid essentials:

No rational nexus with the object sought to be achieved

The object of section 375 is the protection of every woman against violation of their bodily integrity, dignity and privacy. Nonetheless, it ironically exempts from criminalization forceful sexual intercourse within a marriage.

Though married women can approach the court under Section 376 of IPC in case of rape by a stranger, they have no legal recourse in the case of rape of by husband.

An argument put forward by the Government of India before the Delhi High Court was that criminalising marital rape will destabilize the sacred institution of marriage. However, a marriage in which a woman has no say is not worth preserving and further, recognizing marital rape as a crime shall act as checks and balances on the dominance of men in conjugal relationships.

Therefore, the government cannot employ this excuse to hide sexual cruelty and brutality happening within marriage. Hence the exception laid down in section 375 does not share any rational nexus with the object sought be achieved, that is, bodily autonomy and safety.

Also read: Making Marital Rape a crime does not destroy the institution of marriage

The reason behind the classification is based on the presumption that when a woman marries, she implicitly gives an irrevocable consent to sexual intercourse, echoing the stereotypical notion of non-agency of women.

The Kerala Chhattisgarh High Court verdicts, read along with the Supreme Court’s landmark Independent Thought verdict from 2017, establish the need for a debate on marital rape because there can’t be an artificial distinction between the social predicament of a wife below 18 and above. It is unreasonable to say that a wife below 18 years has bodily integrity, but loses it on the attainment of the age of majority.

Bodily integrity is inviolable at any age. Thus, exception 2 in section 375 creates an arbitrary and unreasonable classification between married and unmarried women, violating Article 14 of the Constitution, and must be struck down accordingly.

Article 21 guarantees every individual the right to life and personal liberty. It has been profoundly interpreted by the judiciary from time to time making it more comprehensive and inclusive, including a cluster of other essential rights such as the right to bodily self-determination, right to sexual privacy, and right to health, among many things, which are all grossly violated by the exception provided in section 375.

The Supreme Court has labelled the offence of rape as an act of “deathless shame and the gravest crime against human dignity”.

However, presently the law, in the case of a married women, does not visualize rape as a crime against women’s dignity but as a crime against her husband’s dignity. This is because a stranger can be punished for violating a ‘married woman’s dignity’. but when the same woman is subjected to rape by her husband, it will not amount to the violation of her right to live with human dignity.

Also read: Why Shashi Tharoor’s private member Bill demanding criminalisation of marital rape is a step in the right direction

The right to make a reproductive choice  is personal liberty guaranteed under Article 21 of the Indian Constitution, as per the Supreme Court. The apex court has stated that a woman should not be treated as a commodity having no bodily autonomy or no right of her own to deny sexual intercourse with her husband.

In Independent Thought, the Supreme Court, while deciding upon the extent of the applicability of section 375 of the IPC in the case of a minor wife, had averred that sexual violence is an invasion of a woman’s right to privacy. This right, vested with every woman, ensures that she is not a man’s plaything, and no one can violate her privacy.

Moreover, in the recent case of Joseph Shine v. Union of India (2018), the Supreme Court observed that woman is not a chattel or property of men, and every woman, regardless of marital status, possesses the inalienable right of sexual autonomy. The apex court criticised the assumption that a woman loses her sexual agency to her husband when entering into a marriage, and opined that sexual autonomy is an inviolable core of human dignity.

However, the union government has tried to justify that sexual intercourse between a man and wife is private, and any interference in it will be an encroachment on their privacy. As far as privacy of relation between a husband and wife is concerned, there are already laws currently in force in India which concern themselves with many intimate and private questions relating to the marital sphere.

The same view has been reiterated in the landmark Puttaswamy judgement of 2017 where the Supreme Court recognised that the privacy argument should not be used as a veneer for the abuse of the women and the assertion of the patriarchal mindset.

Moreover, the right to privacy includes the freedom to be left alone without any interference from anyone. Since marital rape compels a married woman to engage in a sexual relationship against her will, it denies her right to life.

Health is another compelling reason to advocate for the removal of the marital rape exemption clause.

The impugned exemption denies the victim the right to good health as it opens them up to the risk of grave physical harm, including miscarriages, infertility, bladder infections and serious injuries to the private parts. It can also drive her into a deep emotional trauma comprising of anxiety, depression shock, post-traumatic stress disorder, low self-worth and suicidal thoughts. This becomes even more perilous in cases where the forceful non-consensual sexual act can lead to the potential spread of sexually transmitted diseases.

The marital exemption doctrine thus effectively strips away a married woman’s right to good health and hence, is unconstitutional.

Rape is an egregious act that cannot be merely construed as a sexual offence but is an act to degrade and humiliate the dignity, modesty, and integrity of a woman. However, the marital rape exception in section 375 of IPC fails to identify this, and hence infringes upon some of the most treasured fundamental rights provided in the Indian Constitution.

It must thus be set aside on account of being ultra vires. Therefore, the Parliament should declare marital rape a criminal offence punishable under IPC, as was also recommended by the Justice J.S. Verma Committee in its report on criminal law amendments in 2013.

(Yatin Gaur is a student, pursuing B.A., LL.B. (Hons.) from the Hidayatullah National Law University. The views expressed are personal.)