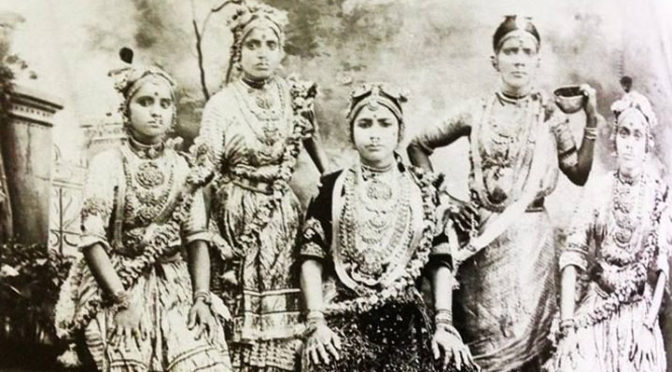 A teenage girl escaped dedication to the devadasi practice in Karnataka earlier this year. NIHARIKA RAVI examines why these archaic traditions continue to prevail over 74 years since the first laws protecting women from dedication were passed in independent India.

A 19-year old girl was rescued in Vijayanagara after she alerted the police about her parents’ plan to push her into the devadasi tradition in early February 2021, in what, as the New Indian Express reports, “a chilling reminder that some parts of Karnataka have managed to keep alive inhumane practices like the Devadasi system” despite it being banned.

“The girl’s mother is a former devadasi and was keen on pushing her daughter into the practice. Though it’s practised in the name of goddesses, girls become sex slaves with no future…”, the New Indian Express report quoted a police official connected to the raid.

This case was solved considerably easily, according to the report, because the survivor was able to contact the police directly, but the same cannot be said about thousands of others dedicated each year, despite prevention of dedication laws. A 2015 report by the non-profit organization Sampark, submitted to the International Labour Organisation, estimated that there are close to 4,50,000 devadasis all over India.

Karnataka, Andhra Pradesh, Tamil Nadu and Maharashtra are identified as the states that have prevalent devadasi populations according to a policy brief on devadasi legislations by the law and policy organization Centre for Law & Policy Research.

The devadasi tradition continues to receive customary sanction from families in multiple states, according to a 2018 study by the National Law School of India University (NLSIU), and women continue to be dedicated under this sanction every year. The NLSIU study revealed horrifying details on the tradition: 92% of participating women were dedicated as minors, and 74% of the women had their first sexual contact before the age of 18.

A 2018 study revealed horrifying details on the tradition: 92% of participating women were dedicated as minors, and 74% of the women had their first sexual contact before the age of 18.

Out of the 62 participants, 41 were from families where at least one other woman had been earlier dedicated and 20 were daughters of devadasis, which reveals a pattern that the Vijayanagara case might also have followed. Of all these women, only two had ever approached the police.

A 2018 Tata Institute of Social Sciences (TISS) study bore similar results. Countless studies, including these, have additionally indicated that most women so dedicated belong to Socially and Economically Backward Castes.

The devadasi system: a brief history

The first law prohibiting the dedication of women as devadasis was passed before Independence. The last one was passed close to 16 years ago. Yet, a toxic form of the devadasi tradition continues to thrive in the smallest pockets and flourishes in remote civilisations. Devadasis are married to idols of local deities and live as sex workers in an exploitative practice that is derived from a history spanning centuries.

The devadasis, however, were not always an oppressed class. Devadasis, literally the servants of God, were once temple dancers. They practised a form of dance that is called Sadir, Nautch or Dasi Attam. Over time, the devadasi practice has come to be known as one in which “lower” caste girls are “married” to the Goddess Yellamma and sexually exploited by temple patrons and other higher caste and class individuals.

Also Read: Forced sterilisation on women and girls with disabilities is against law

The devadasi tradition eventually began declining and this forced the devadasis to start performing in courts where they were patronised by kings. While it may not have been uncommon for these devadasis to be courted by the kings and ministers, many later came to be sexually abused by them. Additionally, priests began sexually abusing the devadasis in the temples. Eventually, the “pure” system of temple dancers who dedicated their lives to the service of the lord was reduced to what many, including the prevention of dedication laws, perceive as prostitution across generations.

The colonisers found this system repulsive, often outright blaming the devadasis for spreading social anarchy, and took many steps to abolish the devadasi tradition altogether, as explained by sociologist Kalpana Kannabiran. A “revivalist” movement in Bharatanatyam was born in the 20th century in urban Tamil Nadu to “save” the dying art form, effectively misappropriating the art itself from the lower caste devadasis and reducing their service to the Goddess Yellamma to having sexual relations in exchange for money in their community.

Alienating the artist: the anti-nautch movement

This alienation of the original artists, the devadasis, from their art, has seldom been discussed in context of the current plight of the community. The anti-Nautch movement, as it was called, was a rally against the so-perceived uncouth art of the devadasis that was considered too sexual and unholy. The movement was branded as one that saved the art from extinction in the custody of the devadasi clan.

Article 29(1) of the Constitution of India, today, gives each citizen the right to preserve their own culture. Can the art that is today known as Bharatanatyam be categorised as the Devadasis’ culture as much as it is the culture of the followers of the leaders of the anti-nautch movement? Would it not be moral, and in keeping with the principles of natural justice, to make provisions to return the misappropriated art to its original creators and propagators? And could returning the art to the devadasis, as it were, play a role in elevating their social status to its previous glory?

Devadasis and the law

The first legal proscription of the dedication of women to the devadasi practice was through the Bombay Devadasi Protection Act, 1934. Immediately after Independence, the Bombay Act was followed by the Madras Devadasis (Prevention of Dedication) Act, 1947. The Andhra Pradesh Devadasi (Prevention of Dedication) Act was also first promulgated in 1947 and was later amended in 1988. The Karnataka Devadasis (Prohibition of Dedication) Act was passed in 1982, and it is shockingly noted that the Karnataka Government has still not issued rules to administer the law. The Maharashtra Devadasi System Abolition Act was passed in 2005.

The fact that lawmakers felt that the need to enact not one, but two state-level prevention of dedication laws immediately after independence is strong commentary on how the system was already perceived as a social evil at that time. In fact, contemplations on whether devadasis should be protected by the Constitution of India were also made in the Constituent Assembly Debates in the following months.

“The most ironic fact about the most vulnerable groups is that official agencies don’t even acknowledge that they exist,” states Sampark’s study on the devadasi practice

However, Sampark’s 2015 report on the devadasi system, referred to earlier, points out that these laws criminalise the devadasis’ actions instead of protecting them and dedication, sexual and commercial trafficking continue to prevail in secret. The TISS report had indicated along these lines that most local self-governments are unaware of the dedication until the devadasi becomes pregnant.

Contributions of the judiciary

The National Human Rights Commission, in 2017, took cognizance of a complaint drawing its attention to the abuse faced by girls and women dedicated as devadasis in Thiruvallur in Tamil Nadu. The pre-adolescent girls are forced to perform a ritual for which they are dressed up as brides, after which their dresses are removed by boys, leaving them virtually naked, and are thereafter forced to live in the Mathamma Temple as “public property” and face sexual exploitation. The Commission subsequently issued notices to the Andhra Pradesh and Tamil Nadu Governments regarding the matter.

Also Read: From victim to survivor: Journey of Indian women’s legal struggle for compensations against crimes

These proceedings shed light, once again, on a writ petition filed before the Supreme Court in 2014 on the eve of the Full Moon in the Magha month when girls are dedicated after a pompous day of celebrations in temples like the Uttangi Durga Temple in Karnataka and many others in Andhra Pradesh and Tamil Nadu as well. The petitioner, S.L. Foundation, advocating for the rights of the girls, prayed that the Court grant relief by issuing a writ of mandamus for urgently restraining this event, issue the same writ to direct that strict steps be taken to prevent all dedications, make relevant laws and guidelines, and also rehabilitate victims of the practice.

The Supreme Court immediately issued directives in compliance with the first prayer to take immediate action to stop the rituals at the Uttangi Durga Temple. The apex court’s order acknowledged that the Union of India had issued an advisory in December 2015 to all states and Union Territories to ensure the strict implementation of laws and initiate a special drive to identify and rehabilitate all victims of the practice.

The Court directed that a copy of the writ petition and the order be sent to the Chief Secretaries of all states and Union Territories so they may fulfil the “laudable object” of the Centre’s guidelines.

Remedying the plight of the devadasi class

The Prevention of Dedication statutes and the Courts, however, have failed to recognise that legitimising the taking away of art from the dancers through these laws would only lead to further marginalisation and would force them, even more, into sex work. These band-aid interventions further failed to give devadasis the agency to continue dancing and teaching dance, dealing only with criminalising the actions of the devadasis with respect to sex work.

Policy organisations that have studied the devadasi laws have made recommendations like the facilitation of accurate census, provision of land and income generation activities that promote the breaking of the low-skill and low-wages model of employment that is sex work, creation of federations, unions, and self-help groups for the devadasis, a creation of norms for the comprehensive eradication of the devadasi system, and devising prevention of dedication strategies. Some of these recommendations take largely from the Anti-Nautch Movement and the casteist stigma it has created against the devadasis, neglecting that the devadasis have a constitutional right to protect their culture and can simultaneously also be empowered by being given the right to their lost art.

Also Read: Why Ensuring Dalit Human Rights is Still a Tough Task in the 21st Century

It is understood that the vision of the reformers who took the art from the devadasi artists was that the reformed version of the art shall eventually trickle down to the devadasi class. While there is little evidence to show whether or not these aspirations have manifested in reality, it is evident that the devadasis class has been forced to resort to sex work and that the art, if at all, does not contribute to their livelihood in a substantial manner, while upper caste dancers from all the states where the practice is still dominant lead comparatively more comfortable lives gaining from their occupation as Bharatanatyam dancers and teachers. Clearly, this vision of the Anti-Nautch Movement remains to be realised.

“The most ironic fact about the most vulnerable groups is that official agencies don’t even acknowledge that they exist,” states Sampark’s study on the devadasi practice, strongly highlighting the need to look back towards the forgotten devadasis in the 21st century.

The community has, for decades, been subjected to triple marginalisation on the basis of caste, class, and gender, and also to the further relegation of alienation from their art which has pushed them into abject poverty and ineludible sex work. It is time that the vicious brutality meted out to the devadasis strikes social conscience and reparations are made to the community to systematically resocialise the descendants of the great temple dancers.