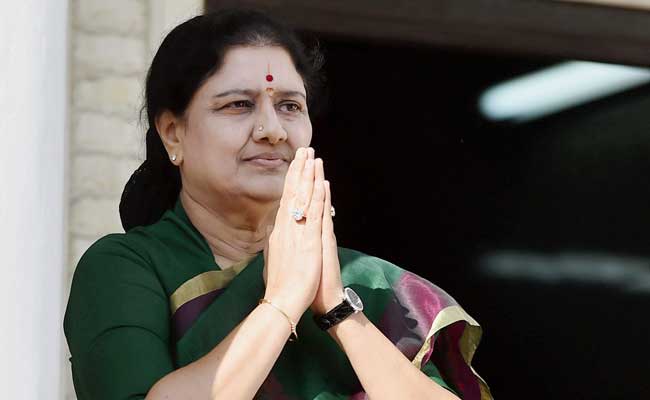 Sasikala steps out of jail into a political career

An association of three decades and a friendship that lasted longer, the VK Sasikala-Jayalalithaa association was a political force. After serving a prison sentence for a disproportionate assets case, Sasikala seeks to redeem herself by stepping into the political spotlight, for the first time, alone. SAIKEERTHI reports on her eventful, sometimes tumultuous, journey, as the law kept catching up with her and her benefactress.

THE acquaintance of VK Sasikala with the former chief minister of Tamil Nadu, J. Jayalalithaa, dates back to the 1980s. In this period, Jayalalithaa and the All India Anna Dravida Munnetra Kazahagam (AIADMK) entered Tamil Nadu politics.

Sasikala remained important in Jayalalithaa’s life until she died in December 2016. The two women supported each other even outside the political spotlight. AIADMK members and the public knew Sasikala wielded influence on Jayalalithaa, but it was not publicly acknowledged.

Their political association survived four victories in the Tamil Nadu Assembly elections. Sasikala played a role in electoral negotiations, took crucial decisions regarding the party, and negotiated between AIADMK and its political allies. She, therefore, made significant contributions to Jayalalithaa’s efforts to consolidate her power in the state. However, their close association or friendship invited a lot of criticism.

A constant shadow of doubt was always cast over Sasikala’s intentions, even from within the party. Though many believed she did just what Jayalalitha asked her to do, her role and powers always raised questions. She was accused of being involved in corruption scandals and reportedly involved with the mafia during the 1990s as well.

Sasikala’s troubles with the law began in 1996 when the ruling party, Dravida Munnetra Kazhagam (DMK) headed by M Karunanidhi, filed a case against Jayalalithaa and her associates. The charges were that they misused their offices to purchase 45,000 colour television sets to distribute in village panchayats. They allegedly bought these sets at a price higher than quoted and received kickbacks worth Rs. 10.16 crores in the process.

There was an investigation, and in 1996 December, Jayalalithaa, Sasikala, and a few others were arrested and remanded to thirty days in judicial custody. These developments coincided with Karunanidhi’s ascent to power in Tamil Nadu. His party swept the 1996 Assembly election.

In 1998, the state police submitted its charge-sheet against the accused in the colour TV case. On May 30, 2000, a special court declared Jayalalithaa, Sasikala, and her relative, Baskaran, not guilty. The judge found the evidence did not prove they participated in any conspiracy.

This case against Jayalalitha and Sasikala was filed by Subramaniam Swamy, who then headed the Janata Party. It made charges based on a trail of land purchases from the Tamil Nadu Small Industries Corporation (TASI), a government agency, by Jaya Publication and Sasi Enterprises, in 1992. The accused allegedly had holdings in the company that purchased the land.

Jayalalithaa could not contest in the 2001 state Assembly election because of this case. However, AIADMK still scored a sweeping majority against the DMK in these polls and she took oath as chief minister again, despite the challenges she faced. However, the Supreme Court disqualified her appointment and she had to step down from the position.

In 2001, Sasikala and five other accused including the former chief minister were acquitted of all charges by the Madras High Court.

This case coincided with the colour TV case. It was filed in 1996, also by Swamy, against Jayalalitha and her associates, including Sasikala. If any case still haunts the public image of Sasikala, it is this disproportionate assets case. The charge was that while she was chief minister from 1991 to 1996, Jayalalithaa had accumulated properties worth more than her known sources of income. The trial began in the sessions court in Chennai in 1997.

On February 14, 2017, the Supreme Court found Sasikala, her sister-in-law, Ilavarasi, and her nephew, VN Sudhakaran, the co-accused in this case, guilty of owning illicit wealth worth Rs. 66.44 crore, which they amassed during the 1990s along with Jayalalithaa. The accused were sentenced to four years in prison.

The verdict came two months after Jayalalithaa had died, on December 5, 2016, of cardiac arrest. Now Sasikala took the important post of general secretary of the AIADMK.

CONSPIRACIES AROUND SASIKALA’S RELATIONS WITH JAYALALITHAA

Critics within the AIADMK would cite unhealthy power-play between Jayalalithaa and Sasikala to disapprove of their relationship. Their bond was based on the protection Sasikala provided Jayalalitha after the sudden death of former AIADMK general secretary and former Tamil Nadu chief minister MG Ramachandran. After MGR’s death, the ropes of power were suddenly handed over to Jayalalithaa despite opposition from the party.

Sasikala and her extended family, disparagingly known as the “Mannargudi mafia”, soon moved into Jayalalithaa’s residence to provide her protection. Soon, Jayalalithaa’s power within the AIADMK grew and she became chief minister in 1991.

Many reports said that Jayalalithaa had blind faith in Sasikala and that this became the reason for her downfall. Many party officials believed Sasikala and her family were planning to send Jayalalithaa to prison instead of Sasikala for the disproportionate assets case in 2011. Sasikala was temporarily expelled from the party along with 13 of her family members.

However, an investigation concluded that there were no grounds behind the rumours.

On January 27, Sasikala completed her four-year prison term, but she tested positive for COVID-19 and remained in judicial custody at the Government Victoria Hospital. On discharge, she announced she would soon enter “full-fledged” politics. The announcement came as the state gears up for Assembly elections in May.

Her statement laid the ground for possible negotiations between the NDA-led AIADMK and the AMMK.

This Assembly election could determine Sasikala’s future in Tamil Nadu politics. It is a first solo step into the political spotlight, after living in Jayalalithaa’s shadow for decades, before and after her death.

(Saikeerthi is a final year journalism student at Symbiosis Institute of Media and Communication and an intern with The Leaflet. The views expressed are personal.)