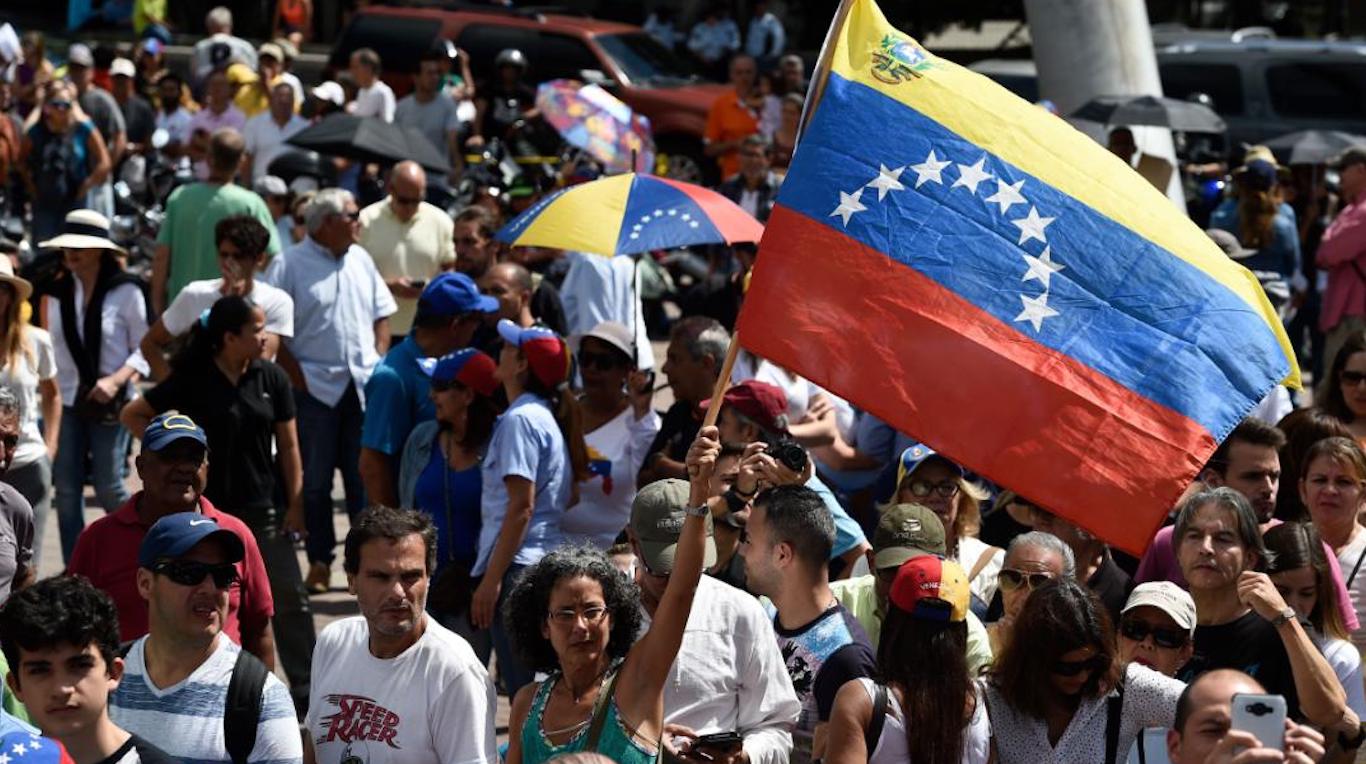 Trump is paving the way for a bloody civil war in Venezuela, fueling coup d’état against Maduro

In a deja vu, it appears that the United States has been preparing the ground for a military invasion with thousands of troops rumoured to be massing in neighbouring Colombia. US National Security Adviser John Bolton sparked intense discussion on Monday after he was photographed carrying a note which appeared to read: “5,000 troops to Colombia” as he left a press conference. It comes days after US Republican Senator Lindsey Graham revealed that President Donald Trump had discussed the use of military intervention as imperialist powers ramp up their efforts to bring down democratically elected Venezuelan President Nicolas Maduro.

[dropcap]P[/dropcap]EACE campaigners warned a foreign attack on Venezuela would prompt a “bloody civil war” as it appeared that the United States was preparing the ground for a military invasion with thousands of troops rumoured to be massing in neighbouring Colombia.

Hawkish US National Security Adviser John Bolton sparked intense discussion on Monday after he was photographed carrying a note which appeared to read: “5,000 troops to Colombia” as he left a press conference during which he announced fresh sanctions on Venezuela’s state-owned oil company PDVSA.

It comes days after US Republican Senator Lindsey Graham revealed that President Donald Trump had discussed the use of military intervention as imperialist powers ramp up their efforts to bring down democratically elected Venezuelan President Nicolas Maduro.

Colombia’s Foreign Minister Carlos Holmes moved to dismiss fears of a US troop presence saying that it would continue to act “politically and diplomatically” but insisted new elections should be held despite international observers giving Venezuela’s May election a clean bill of health.

US Acting Defence Secretary Patrick M Shanahan told reporters today that he hadn’t discussed the matter with Mr Bolton but when pressed on whether he would rule out sending 5,000 troops to Colombia said: “I am not commenting on it.”

Mr Maduro has consistently warned that Colombia – led by right-wing President Ivan Duque – would be used as a staging post for intervention.

Those fears intensified following last year’s drone attack on Mr Maduro as he attended a military parade in Caracas. Investigations led the government to conclude that the assassination attempt originated in Colombia.

“Let me recall that the ‘return of democracy’ to Venezuela or, calling things by their true names, the destabilisation of the situation in this country is being carried out from the territory of Colombia,” she said.

Late president Hugo Chavez was elected in 1999 on the promise that he would share Venezuela’s immense oil wealth with the poor, the country derives 95% of its export earnings from petrochemicals. Fuelled by high oil prices that went from $10 barrel when he took office, to over $100 when he died of cancer in 2013, Chavez enacted a series of policies aimed at redistributing wealth. His government nationalised parts of the country’s economy, from oil rigs to telecommunications firms to banks, forcing many companies to flee the country. Nicholas Maduro, Chavez’s hand-picked successor, was elected by a thin margin in 2013, but came to power as oil prices plummeted by more than 50%.

“And what about non-interference in internal affairs – from elections to cybersecurity, which have been a subject of such concern for the collective West over recent years – you will ask?”

Britain’s role in pushing for regime change came under fire from parliamentarians in a heated Commons debate last night with Labour MP for Derby North Chris Williamson warning against “intervention from Western powers” which he said could “lead to a humanitarian catastrophe.”

Speaking to the Star about the possibility of the troop build-up in Colombia Mr Williamson said: “This revelation reinforces the genuine fears that Trump is determined to bring about regime change in Venezuela to get his hands on its oil reserves.

“It seems he’s prepared to deploy the US military to achieve that goal and that could lead to a bloody civil war. “But the Trump cheerleaders in the House of Commons and media establishment don’t seem to care.”

In a written answer to a question from Mr Williamson, Defence Minister Mark Lancaster confirmed that Britain provided military training last year to countries including Argentina, Brazil, Chile, Colombia, Guyana, Uruguay, Paraguay and Peru – all of which share or lie close to Venezuela’s borders. Mr Lancaster cited Britain’s “deep and enduring interests in Latin America and the Caribbean” as the reason for providing the assistance.

UK Foreign Secretary Jeremy Hunt claimed last week that it was “clear” that Mr Maduro was not the legitimate leader of Venezuela and joined his European Union counterparts in Spain, France and Germany in issuing an ultimatum to Venezuela demanding they call fresh elections in eight days otherwise they would recognise unelected usurper Juan Guiado, president of the defunct National Assembly.

The Bank of England has refused to hand over $1.3 billion (£1bn) of Venezuelan gold it holds as part of the Bolivarian country’s $8 bn (£6.1bn) in foreign reserves, despite numerous claims made by Mr Maduro’s government. It reportedly buckled under pressure from the US Secretary of State Mike Pompeo, who wants the assets stolen and handed to Mr Guaido to help him seize power.

In a bid to counter the attempts, Venezuelan Prosecutor General Tarek Saab asked the Supreme Court to stop Mr Guaido leaving the country and block his assets. He urged the court to investigate the self-proclaimed president, though as an MP Mr Guaido has legal immunity, so a legal case against him can only be opened following a decision by the Supreme Court.

Punitive sanctions implemented by the US and EU in a bid to foment regime change were branded “illegal and a crime against humanity” by former UN special rapporteur Alfred de Zayas earlier this week as he called for action from world bodies to prevent a further crisis unfolding.