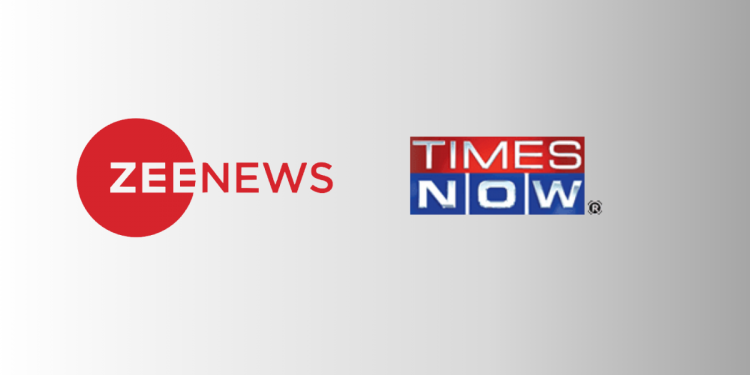 Times Now, Zee News ordered to take down videos, as NBDSA finds them in violation of its code of ethics

THE News Broadcasting & Digital Standards Authority (NBDSA) has passed orders directing the news channels Times Now and Zee News to remove from their websites, YouTube channels and any other platforms, videos of their broadcasts pertaining to the 2020 Delhi riots, as well as the coverage of the farmers’ protest on Republic Day 2021, respectively.

In a set of orders delivered by former Supreme Court judge Justice A.K. Sikri, the Authority said that the programs violated its code of ethics and fundamental principles of broadcasting standards.

Also read: Free speech in India 2018: The State rolls on

The first set of complaints was filed by Delhi based lawyer Utkarsh Mishra, part of the Campaign Against Hate Speech initiative. The complaints were registered against Times Now anchors Rahul Shivshankar and Padmaja Joshi for their India Upfront episodes anchored by Shivshankar on September 14, 2020 and by Joshi on September 23, 2020.

Particularly, his complaint also highlighted how the show had reportedly cherry-picked and selectively used observations by the courts and police in order to show that the anti-Citizenship (Amendment) Act (CAA) protesters were responsible for the February 2020 riots. The order, quoting Mishra’s complaint said:

“The coverage was done to target a community that is critical of the Delhi Police’s investigation and project them and their critique in a negative light, thereby unduly hindering the right of the viewer to have a fact based view on the matter and amounted to a sustained campaign to challenge a position, without intimating to the viewers what that position is in its entirety or allowing panellists to explain the same.”

Further, the complaint drew attention to at least five recent judicial observations that questioned the Delhi Police’s investigation and the arrests made, pointing out that the aforesaid information was critical for Times Now’s viewers to develop an unbiased opinion on the case, which the broadcast failed to do, opting to report on unverified police claims to “target and project a particular community in a negative light” instead.

Mishra also said that Shivshankar projected a public webinar broadcast through Facebook Live as a “secret meeting” of Leftists, thus attempting to mislead the viewers and foster hostility between communities by misleading them regarding this webinar. He also stated in his complaint that “the broadcaster also gave incomplete information regarding Kapil Mishra, and the nature and number of hate speeches made by BJP leaders and express attempts were made to dismiss the charges against Kapil Mishra as irrelevant and draw false equivalencies between the speeches made by the BJP officials and anti-CAA protestors.”

The second broadcast which Utkarsh Mishra complained against was the India Upfront episode anchored by Joshi, titled “Delhi Riots: Plot to Kill Cops and Kaafirs Exposed; Peaceful Protest A Facade?” . In this, he alleged that the broadcast had not covered the Delhi Riots’ investigation in an impartial and fact-based manner. The complaint notes that the anchor “passed judgment on the strength of the witness testimonies, WhatsApp chats contexts, attempted to discredit the anti CAA protestors, by using sub judice issues as the bases for her accusations, thereby running a media trial to hinder one side of a controversial issue”.

The anchor also reportedly attempted to misconstrue criticisms of the manner in which the police investigation was carried out as proof of a lack of faith in the judiciary. Mishra’s complaint adds that a “large number of the anchor’s conversations were with a BJP spokesperson, who has in the past spread misinformation on the channel and been encouraged by the anchor”.

The complainant also stated that Joshi had attempted to link the riots conspiracy with peaceful anti-CAA protestors even through the “quantum of Muslim casualties was higher than the rest”. In addition to this, Mishra alleged that Joshi’s broadcast violated Clause 3 of the Guidelines to Prevent Communal Colour in Reporting, deviating from objective facts, particularly when the accused belongs to a minority community.

Also read: Sec 118A enacted by Kerala is necessary to curb the dangerous menace of FAKE NEWS

Meanwhile, in response to the complainant, Times Now denied allegations levelled against it, labelling the complaints as “unnecessary and frivolous” and made “in a whimsical manner”. It also invoked their right to freedom of speech and expression under Article 19(1)(a) of the Indian Constitution, to justify the right of news-media to propagate such news and the public to receive the same information.

While the NBDSA directed the videos of Shivshankar and Joshi’s broadcasts to be taken down, Mishra noted that they failed to order the anchors to apologise, as was prayed by him. Speaking to The Leaflet, he said, “They (the NBDSA) still haven’t asked the journalists to apologise, but it is good that this body has acknowledged it”. He also noted that the NBDSA has acted on only these 2 out of 13-14 complaints filed by their campaign so far, adding that the order did not specify which guidelines were violated, and lacked in jurisprudential analysis. “They have just copy-pasted our whole complaint and given one paragraph as their decision in the end.”

Although both complaints were dated over a year ago, the NBDSA’s decision to give a decision only came in on 19 November, 2021, more than a year since the broadcasts last September.

Also read: Only fact-checking and regulation can help us fight the ‘Fake News vs Free Press’ battle

Aside from Utkarsh Mishra’s complaints, one Indrajeet Ghorpade also filed two complaints in January of 2021, pertaining to programmes aired on Zee News on January 19, 20 and 26 of this year.

While the NBDSA directed the videos of Shivshankar and Joshi’s broadcasts to be taken down, it failed to order the anchors to apologise, as was prayed by the complainant. The order did not specify which guidelines were violated, and lacked in jurisprudential analysis.

The NBDSA passed an order with respect to the first complaint which took note of two shows, namely “Taal Thok Ke: Khalistan Se Kab Savdhaan Hoga Kisaan?” (Hit the beat: When will farmers be wary of Khalistan) and “Taal Thok Ke: Nahi Maane Kisaan Toh Kya Republic Day Par Hoga ‘Gruha Yudh’?” (Hit the beat: If farmers don’t relent, will there be a ‘civil war’ on Republic Day?), aired on January 19 and 20 respectively.

The second complaint concerned a video of the broadcast on January 26, in which the anchor claimed that farmers removed the Indian flag and threw it on the ground at Red Fort, when in fact, the Bhartiya Kisan Union flag was the one that was thrown as was fact checked by Alt News and The Quint.

Zee News removed this video a month after the complaint was filed by Ghorpade, and the NBDSA order focused on the first complaint, the videos pertaining to which were not taken down.

Ghorpade’s complaint said that the two shows by Zee News’ then anchor Aman Chopra were in the debate format, where Chopra alleged infiltration of Khalistani forces in the farmers’ protest without due evidence. Said Ghorpade, “Videos of modified tractors from an event in Germany were falsely and maliciously telecast as farmers preparing for a war on the republic. They were fact-checked by India Today and Alt News. Needless to say, the debate was obviously one-sided.”

The complainant also noted that the videos of the broadcast were “designed to create undue fear and distress amongst the viewers and erode public confidence in the capacity of national institutions meant to protect them.”

Despite acknowledging that Zee violated various rules, NBDSA did not order the channel to issue any clarifications or an apology for the violations, only directing the videos to be removed from the internet.

Also read: Why the judiciary is responsible for the plight of news media

In its decision, the NBDSA directed Zee News to take down the videos of the broadcast from the channel’s website, YouTube channel and other platforms. It also took note of certain headlines/taglines used by the channel as violating the Code of Ethics and Broadcasting Standards and Specific Guidelines Covering Reportage, Fundamental Standards and Guidelines 1 and 2. Some of these headlines included: “War Against the Republic”, “Civil War on Republic Day”, “Terror Tractor-Trailers in the protest”, and “Plan Khalistan’ for insurgence against the republic”, among others.

The order, however, comes in 10 months after the said episodes were aired, and Ghorpade noted that “This delay itself makes the entire process and the slap on the wrist of not real significance.”

The complainant also said that the NBDSA’s decision “did not mention a word about the false tractor videos from Germany”.

Despite acknowledging that Zee violated various rules, NBDSA did not order the channel to issue any clarifications or an apology for the violations, only directing the videos to be removed from the internet, Ghorpade rued.