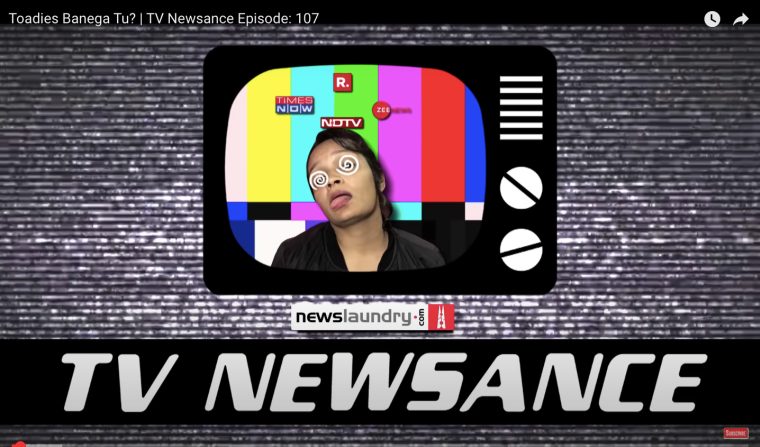 The Times Group have filed a Rs 100 crore defamation suit against Newslaundry citing deliberate intention to insult the company. In a war of words, the crowd-funded news portal seeks to prove a point against the media conglomerate, reports SAIKEERTHI.

Bennett Coleman and Co. Ltd. (BCCL) has moved the Bombay High Court by filing a hundred crore defamation suit filed against the nine employees of News Laundry Media Pvt. Ltd. The plea states that the suit has been filed for allegedly defaming the Times Now editors, Navika Kumar and Rahul Shivashankar. Times Now is a part of BCCL.

The objections were primarily raised against two programs hosted by Newslaundry, both on their website and their official YouTube channel. These programs are, “Toadies banega tu?” (Do you want to become Toadies?) and “Explained: How to Rig TRPs”.

The 107th episode of Newslaundry’s “Toadies Banega Tu” uploaded on December 1st, 2020 has been cited to have allegedly made defamatory statements against the Times Now editors. It’s been stated that the comments made had caused harm to the reputation of the company and its employees.

The video reportedly used a tweet that showed that while the Times of India newspaper called out the arrest of Rhea Chakraborthy in the Sushant Singh Rajput case, Times Now was asking for the actress’s arrest using #IndiaForRheaArrest.

The video also refers to the tweet put out by the owner of Times Group, Vineet Jain calling the arrest of Rhea Chakraborthy as “hypocritical”.

Objections against Newslaundry’s “Explained: How to rig TRPs”

BCCL cited that Newslaundry’s video used a picture of the Times Now editors, implying that the channel was involved in the TRP scam. It’s stated that the video was discovered through a tweet by Newslaundry which read “#NLCheatSheet | What do you do when a system is broken and those tasked with fixing it aren’t doing so?”

BCCL stated that neither the company nor their channels or its editors were named in the First Information Report (FIR) or were called in for questioning by the authorities.

Legal notices were issued to Newslaundry, YouTube and Twitter India by the Times Group for taking down content implying their involvement in the TRP scandal. However, the plea points out that no action was taken by Newslaundry.

The ad-interim application states that BCCL has asked crowd-funded Newslaundry to deposit Rs 100 crore with the High Court. The news portal is also required to refrain from making any further defamatory statements against the Times Group or telecasting their content. The final requirement sought in the application includes an unconditional apology for defaming the Times Now anchors.

In the petition filed, questions were raised against the “tone and tenor” of certain videos put out by Newslaundry. It also cites an alleged misuse of freedom of speech and expression in an attempt to slander BCCL.

Newslaundry’s Response to the Suit

The news portal stated that the episode of “Toadies Banega Tu?” simply tried to show the contradictions in the reportage within various BCCL publications. They cited that therefore, this cannot be accounted as defamation. They also claimed that the terms put forward was not referred to a certain individual and that the responsibilities discussed was to be shared by all members of this profession.

Further arguments were made stating that they had used facts and clippings to present their argument in the video. Their reply to BCCL’s legal notice regarding the matter reads, “It is further needless to submit that truth is the substantive defence to the allegations of defamation.”

The Executive Director of Newslaundry Manisha Pande had stated that the allegations raised were “factually incorrect”.

In response to using the Times Now editors’ picture in the second video, Newslaundry commented that it was a matter of “routine journalistic practice”. It then lists out the number of occasions with examples that the Times Now editors had indulged in such representations.

The case has been posted for BCCL’s rejoinder on February 22.

(Saikeerthi is a final year journalism student at the Symbiosis Institute of Media and Communication and an intern with The Leaflet.)