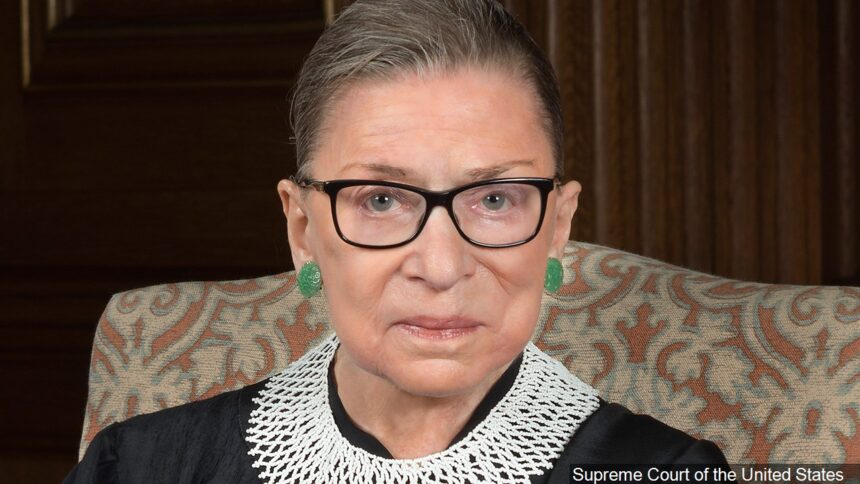 The legacy of Ruth GinsburgWomen's rights

The enduring legacy of Ruth Bader Ginsburg: A Life Lived in Pursuit of Justice

Ruth Ginsburg’s death has left many in grief, especially in today’s dark times. People are mourning her demise as a champion of equal rights and liberal values. AMRITA S NAIR writes  a tribute to her life.

UPON the sad demise of Justice Ruth Bader Ginsburg, a champion of the Constitutional principles and human rights, AMRITA S. NAIR  recalls the monumental effect of her work on the fight for equality in the US. This is a tribute to the Founding mother of the United State’s sex equality jurisprudence.

IN 2012, there sat a girl in one corner of a classroom, wondering what the future held for her. With societal norms and pressures being imposed on her, she wondered what possible professions she could take up. Lost and confused she started reading up and exploring options. Coming across the legal profession she questioned the gender disparity in it. She came across the works of Ruth Bader Ginsburg. “Fight for the things that you care about. But do it in a way that will lead others to join you,” is what she said.

This one line was a turning moment in her life as she decided to become a lawyer and represent people in  the pursuit of justice.

The body of work Ginsburg had left behind made a lasting impact on her. Whenever she got stuck in life, she would ask herself, “What would Justice Ruth Bader Ginsburg have done?”. She would soon find a glimmer of hope and the will to keep going. All she ever wanted was to live up to the standard set by Ginsburg and do good.

Every woman in the law school had to constantly strive and work hard to prove themselves to be capable to justify “taking the places of qualified men”.

With a heavy heart, she sits today to pen down this tribute to one of her greatest icons who motivated her to be a lawyer and fight against injustices and equality.

“Though she be but little, she is fierce.” I cannot think of any better line to describe Justice Ruth Bader Ginsburg.

At first glance, one would never imagine that such a tiny and soft-spoken person could one day become the second female justice of the Supreme Court of the United States and become a force to be reckoned with on the Bench and a powerful voice of dissent.

Whether it’s her being one of the nine women in her Harvard Law School class or making it to the Harvard Law Review as its first female member, Ruth Bader Ginsburg was nothing short of a superwoman. She not only attended classes and completed her academic work, but also helped her ailing husband with his.

Law schools around the country had just started taking in female students and despite the change in the admission policy, they were not very accepting or welcoming female students. Every woman in the law school had to constantly strive and work hard to prove themselves to be capable to justify “taking the places of qualified men”.

RBG singlehandedly paddled her way through to excellence in such a hostile and male dominated environment. She got herself transferred to Columbia University in order to take care of Marty, who had just landed a job in the top tax law firm in New York. She continued to show academic excellence and served as a member of the Law Review even at Columbia. Despite her brilliant academic record, RBG had lots of trouble finding employment in a time where women were considered “too emotional” to be lawyers. “I had three strikes against me. One, I was Jewish. Two, I was a woman. But the killer was I was a mother of a four-year-old child,” she remarked in an interview.

She was recommended for a clerkship under Justice Frankfurter, who rejected it citing a ridiculous reason: “I am not ready to hire a woman. Recommend a man.”

She subsequently clerked under Justice Edmund L. Palmieri for two years. Upon the disappointment of not finding the job she had always dreamed merely because she was a woman, she channeled all of her energies towards shaping future generations of students by teaching courses at the Rutgers and Columbia Law School. She was the first woman to hold the position of a tenured professor at Columbia.

Her dream to argue for equal rights was realised in 1972 when she became the co-founder of the Women’s Rights Project of the American Civil Liberties Union and argued multiple gender discrimination cases of significance.

During her tenure as a practicing lawyer, arguing before various courts across the United States, she was mocked by Judges who constantly tried to joke around or derail her by passing comments that were uncalled for.

Though hailed for arguing multiple cases of discrimination against women, RBG was an advocate for equal rights. At a time where gender discrimination was not seen as a problem, she convinced the Justices presiding over various courts around the United States that women’s rights were indeed civil rights and the practice of gender discrimination proved harmful not only to women but also created a threat to the aspirations of people.

She argued cases to show how the law discriminated against men on the basis of their gender and then strategically went on to show that the same was true for women. Two of the prominent cases that she argued to show that even men were victims of gender discrimination were Moritz v. Commissioner and Weinberger v. Wiesenfeld.

She eventually became the face of American Anti-Discrimination Law and went on to accomplish the nearly impossible task of convincing old men, who lived in denial of the reality of the existence of gender discrimination while adjudicating matters pertaining to them, to extend the protections of the Equal Protection Clause of the 14th Amendment to women.

Her fight for gender equality pivoted the entire structure of the 14th Amendment and toppled the entire system of discrimination.

Some of the notable cases she argued as a lawyer and are:

During her tenure as a practicing lawyer, arguing before various courts across the United States, she was mocked by Judges who constantly tried to joke around or derail her by passing comments that were uncalled for. However, when asked about how she reacted to those, she said, “Never in anger, as my mother told me. That would have been self-defeating. I always looked at it as an opportunity to teach, seeing myself as a kindergarten teacher because the judges didn’t think sex discrimination existed.” She constantly reminded judges that the gender line helps to keep women not on a pedestal, but in a cage.

She was doing something of incredible importance to American women, whether they knew it or not. Her fight against a system that was intrinsically discriminatory changed the entire landscape and gave the momentum to the women’s rights movement through legal change. She believed that protests are important but changing the culture means nothing if the law doesn’t change.

Recognising Ginsburg’s outstanding contribution in the field of women’s rights, President Jimmy Carter nominated her to a seat on the US Court of Appeals for the District of Columbia Circuit and confirmed by the Senate on June 18, 1980. Subsequently, in 1993, she was elevated to the Supreme Court, becoming only the Second Woman to achieve such a feat. In United States v. Virginia, striking down Virginia Military Institute’s traditional male-only admission policy, she wrote, “Women seeking and fit for a VMI quality education cannot be offered anything less, under the State’s obligation to afford them genuinely equal protection.”

In Gonzales v. Carhart, while the Court upheld Congress’ Partial Birth Abortion Ban Act of 2003, Ms. Ginsburg, penning down a dissent, said, “In candor, the Act, and the Court’s defense of it, cannot be understood as anything other than an effort to chip away at a right declared again and again by this Court — and with increasing comprehension of its centrality to women’s lives. The court deprives women of the right to make an autonomous choice, even at the expense of their safety. This way of thinking reflects ancient notions about women’s place in the family and under the Constitution — ideas that have long since been discredited.”

Yet another significant dissent was in the case of Ledbetter v. Goodyear Tire & Rubber Co. When the majority ruled against Lilly Ledbetter’s claim of unequal pay because of her sex, Ginsburg dissented yet again and wrote, “the court does not comprehend, or is indifferent to, the insidious way in which women can be victims of pay discrimination.”

Though the claim failed, Ginsburg’s dissent had such an impact that President Barack Obama signed off on the Lilly Ledbetter Fair Pay Act which said each discriminatory paycheque resets the 180-day limit to file a claim.

As the years passed by and the Bench became more conservative in its composition, Ginsburg became a strong voice of dissent, using the power of her words to impact change in the society while upholding the constitutional principles and human rights.

When asked about her view on 9 being the ideal number on the Supreme Court’s Bench being unreasonable, she said, “Why not? Nine men was a satisfactory number until 1981.”

Ruth Bader Ginsburg was a champion of democracy and a symbol of everything that is right about the American system of justice. Personal setbacks that she faced animated her quest for social justice.

Her colleagues on the Appeals as well as the Supreme Court’s Bench believed her to be a woman who was confident in herself. Like Marty Ginsburg said, “There was no field of law that Ruth could be bested at.”

As I started my journey of building a legal career, RBG taught me a great deal of things. A few of her admirable qualities that I found useful are:

Ruth Bader Ginsburg was a champion of democracy and a symbol of everything that is right about the American system of justice. Personal setbacks that she faced animated her quest for social justice. She said, “Women belong in all places where decisions are being made. It shouldn’t be that women are the exception.”

As a lawyer, she was an extraordinarily powerful strategist and ingenious civil rights pioneer who changed the United States as a nation by developing and deploying legal theories that shattered barriers to equality for women.

As a federal appellate judge and later a Supreme Court Justice, she always made you understand what it means to do justice, whether the question before the court concerned arcane and complex civil procedure, life and death, fundamental rights, or the Republic itself. She transcended the traditional role of a judge.

She was a person who modelled civility compassion and decency. She understood the potential in all people and constantly reminded people that realising the ideals on which a nation is built is a work in progress.

Justice Ruth Bader Ginsburg changed the lives of billions of people, paving the way for gender equality and the realisation of freedom of choice.  This world has truly lost a tireless and resolute champion of justice, as stated by the Chief Justice of the Supreme Court of the United States, and there can be no other.

(Amrita S. Nair is the Founder of The Silent Sexism Project and a Final Year Student at the School of Law, CHRIST. She has a keen interest in Human Rights Law, Constitutional Law and Gender Studies. She travels in her free time and is a lover of art, animals, movies, music and literature.  Views expressed in this article are personal.)