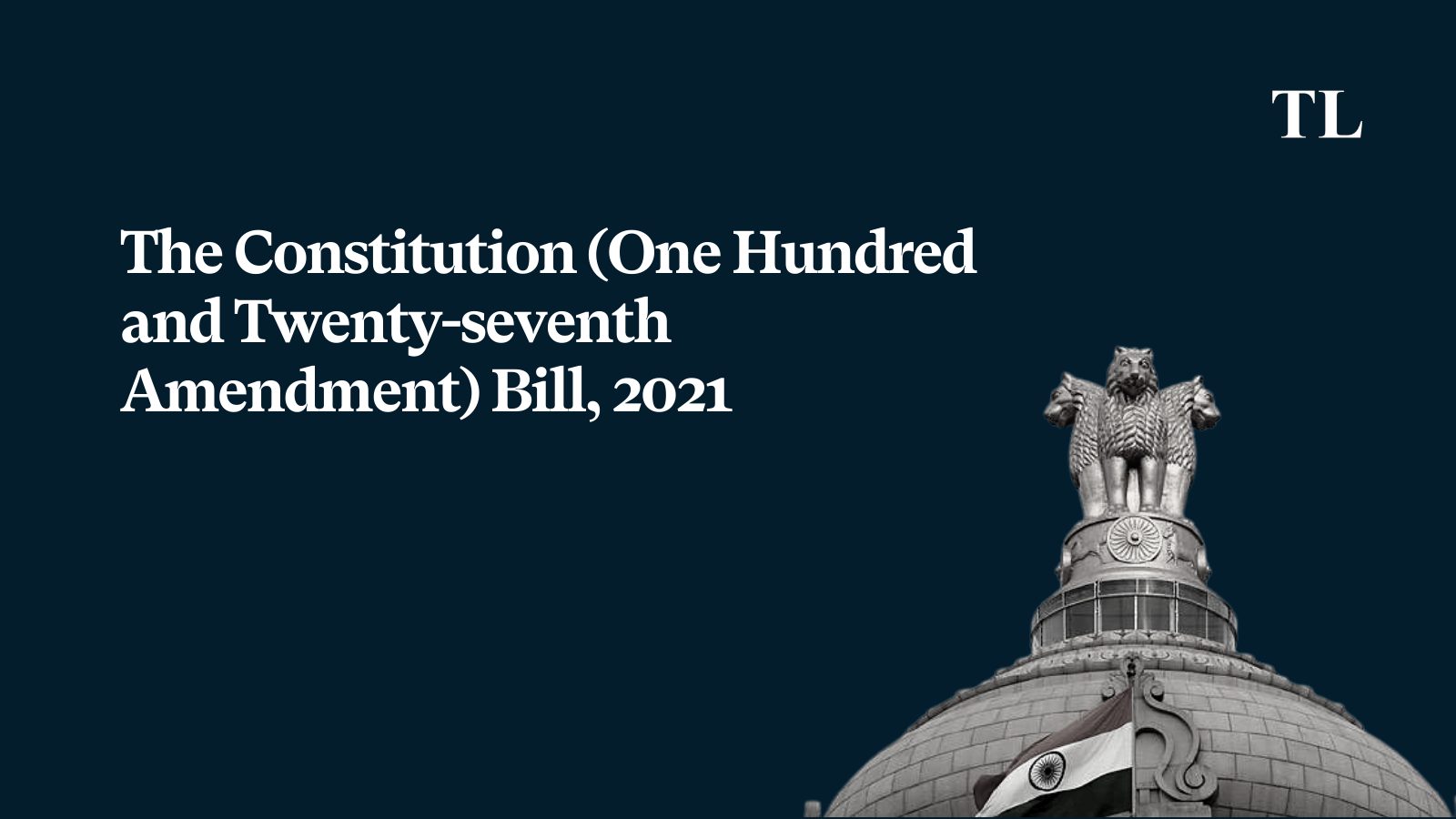 The Constitution (One Hundred and Twenty-seventh Amendment) Bill, 2021: Implications and Constitutional Lacunas

Highlighting the chief developments brought forth by the recently passed 127th Constitution Amendment Bill, 2021, JIBRAAN MANSOOR and SUSHANT KHER place it in the wider context of the changes set into the administration of reservations for socially and educationally backward classes of citizens by the 102nd Constitution Amendment Act, 2018 and the Supreme Court’s split judgment in the Maratha Reservation case from earlier this year.

HISTORICALLY, the imagination of reservations in our constitutional arrangement has been a site of extreme polarities and extreme polarities and contestations between the State and the judiciary. Arguably, this ‘tradition’ transpires before us, once again, in the form of the Supreme Court’s recent Maratha Reservation Judgement and the subsequent unanimous passage of the 127th Constitution Amendment Bill in both Houses of the Parliament in an otherwise ill-tempered monsoon session.

Before undertaking the task of assessing the contours of the recent bill, let us briefly recap the backdrop in which it emerged.

In 2018, the 102nd Constitutional Amendment was enacted, which brought forth three major changes:

First, Article 338B was introduced into the Constitution, which sought to accord constitutional status upon the National Commission for Backward Classes (NCBC), and expand the scope of the NCBC’s operation – scope which was largely similar to that envisaged for the National Commissions for Scheduled Castes and for Scheduled Tribes under Articles 338 and 338A,  respectively.

Second, Article 342A was added to the Constitution, which set out the process for identification of socially and educationally backward classes (SEBCs), with the process closely mirroring the one envisaged under Articles 341 and 342.

Finally, clause (26C) was inserted into Article 366, which explained that the term SEBC means “such backward classes as are so deemed under Article 342A for the purposes of this Constitution”.

Also read: The case for a caste-based census in India

Meanwhile, the question of constitutionality of the Maharashtra State Reservation (of seats for admission in educational institutions in the State and for appointments in the public services and posts under the State) for Socially and Educationally Backward Classes (SEBC) Act, 2018 came up before the Supreme Court in 2018. One of the grounds made out for its unconstitutionality was that it violated the procedural requirements set by the 102nd Constitutional Amendment.

In 2020, the apex court referred the matter to a five-judge Constitution bench of its in what came to be known as the ‘Maratha Reservation case’.

In its judgment, rendered on May 5 this year, with regard to the dispute relating to the 102nd Constitutional Amendment, by a 3:2 split, the Supreme Court held that the Amendment took away from states their power to identify backward classes of citizens. The majority of Justices Nageswara Rao, Hemant Gupta and S. Ravindra Bhat clarified that the Amendment had altered the previous constitutional arrangement of States and Centre maintaining separate lists for identification of SEBCs, and instead, limited the scope of such identification to only the Centre.

First, since Article 366(26C) understood SEBCs by relying on Article 342(A), the process of identifying SEBCs for the “purpose of [the] Constitution” – including the reservation guarantees in Part III – were now solely the domain of the Centre.

Second, the Amendment created a structure which replicated the one envisaged for Scheduled Castes and Scheduled Tribes, and hence the scope of the new arrangement had to be understood as being pari materia to the same.

Finally, since the central government already had the power to publish lists, the invocation of “central” in the newly amended Article 342A would become redundant, if not for his interpretation.

Various jurists have highlighted the issues with this assessment of the Amendment. For instance, lawyer and constitutional law scholar Gautam Bhatia showcased the different lexicology between “lists” and “Central List” as seen in Articles 342 and 342A, and highlights that the majority’s interpretation has fallen afoul of federal promises of the Constitution. Similarly, while lawyer Santhosh Krishnan suggested that the interpretation might be “legally right”, legal researcher Alok Prasanna Kumar highlighted that the judgement “promises more chaos and uncertainty in the regime governing reservations”.

While these conversations were helpful in understanding the contours of the judgement, Krishnan’s prophetic claim that the judgement would be “overcome by another amendment to the Constitution” proved true with the introduction of the 127th  Constitution Amendment Bill.

Here, we attempt to understand the possible impact of the Bill, especially when read in conjunction with the 102nd Constitutional Amendment.

First, the Bill and the 102nd Amendment combined render a constitutional status upon the NCBC, while also conferring expanded powers to the body. Such a move remains consonant with our constitutional history.

The Commission was created by the NCBC Act, 1993, after the Supreme Court, in its judgment in Indra Sawhney & Ors. vs. Union of India (1992), directed the government to constitute a permanent body for examining the requests for inclusion and complaints of over-inclusion and under-inclusion in the Central List of Other Backward Classes (OBCs). Even then, the grievances and complaints of discrimination of OBCs were overseen by the National Commission for the Scheduled Castes under Article 338(10) of the Constitution.

Subsequently, in its Annual Report of 2014-15, the National Commission for Scheduled Castes suggested that the handling of such grievances of the SEBCs under Article 338(10) should be given to the NCBC instead. Subsequently, this move seems understandable.

An interesting conversation, however, emerges when deliberating the contours of Article 338B(9). Initially, as per the 102nd Amendment, Article 338B(9) required for the Union and every State Government to consult the NCBC on all major policy matters affecting the SEBCs. In interpreting this clause, Justice Ashok Bhushan, in his minority decision in the Maratha Reservation judgement, had held that the provision mandates “consultation” of all states with the NCBC – consultation which while different from “concurrence”, needed to be “meaningful, effective with all relevant materials and information placed before Commission”.

Interestingly, however, the Amendment Bill adds a proviso to clause (9) which reads, “[p]rovided that nothing in this clause shall apply for the purposes of clause (3) of article 342A”.

Now, as we will shortly see, clause (3) of Article 342A, also added by the Amendment Bill, reiterates the power of the state and Union Territories to prepare their own lists of SEBCs. Arguably, then, while clause (9) in 338B requires states to consult the NCBC, clause (3) of Article 342A robs the necessity of this consultation for lists which are prepared by the states. One then wonders of the possible implications of these two provisions.

The second major change, as briefly outlined above, concerns Article 342A. By way of the 102nd Amendment, Article 342A was introduced, which created a structure for identification of SEBCs similar to the one envisaged for Scheduled Castes and Scheduled Tribes – the centre maintains its list, and the Parliament may, by law, include in or exclude from the Central List of SEBCs.

The rationale for this amendment was aptly captured by Justice Bhushan in his minority opinion in the Maratha Reservation judgement, wherein he notes that the amendment follows the reasoning given by Dr. B.R. Ambedkar in the Constituent Assembly.

Under the Government of India Act, 1935, the list of “the scheduled castes” was to be specified by the executive under clause (26) of Schedule I of the same Act. However, a perusal of the debates in the Constituent Assembly surrounding Draft Articles 300A and 300B, which correspond to Articles 341 and 342 of the Constitution of India, showcases that Ambedkar added the provision concerning Parliament’s oversight to “eliminate any kind of political factors having a play in the matter of the disturbance in the Schedule so published by the President”.

Similarly, while the lists which were issued after NCBC Act, 1993 Act by the Government of India were by executive orders issued from time to time, after the 102nd Amendment, “the list once issued by the President under Article 342A(1) cannot be tinkered with except by way of Parliamentary enactment”. Now, in the 127th Amendment Bill, after Article 342A(2), an Explanation has been added that the “Central List” means the list SEBCs prepared and maintained by and for the Central Government. Further, in the proposed clause (3) of the same Article, it has been noted that “every State or Union territory may, by law, prepare and maintain, for its own purposes, a list of socially and educationally backward classes, entries in which may be different from the Central List”.

In reinstating the structure of two lists which was historically followed, the amended Article would not seem to remain pari materia to Articles 341 and 342. A direct implication of this inference then makes one return to Supreme Court’s judgement in State of Punjab & Ors. vs. Davinder Singh & Ors. (2020). Here, a five-judge Constitution bench of the apex court, by relying on the 102nd Amendment and the pari materia nature of provisions, had argued that sub-classifications could be created within the Scheduled Castes or Scheduled Tribes lists as well, as they were allowed for SEBCs, and requested for the matter to be placed before a larger Constitution bench of at least seven judges for consideration.

While Davinder Singh sought to further this conversation by noting the non-heterogenous dynamics within Scheduled Castes and Scheduled Tribes, one now wonders if the legal basis of the ruling can be called into question.

Finally, the 127th Amendment Bill substitutes Article 366(26C) by defining “socially and educationally backward classes” as “such backward classes as are so deemed under article 342A for the purposes of the Central Government or the State or Union territory, as the case may be”, thereby reiterating the constitutional commitment of maintaining different lists for Centre and state/Union Territory.

(Jibraan Mansoor is a law student at the Jindal Global Law School, Jindal Global University, Sonepat, and a graduate in Political Science from Ashoka University. Sushant Kher is an economics graduate from Shri Ram College of Commerce. The views expressed are personal.)