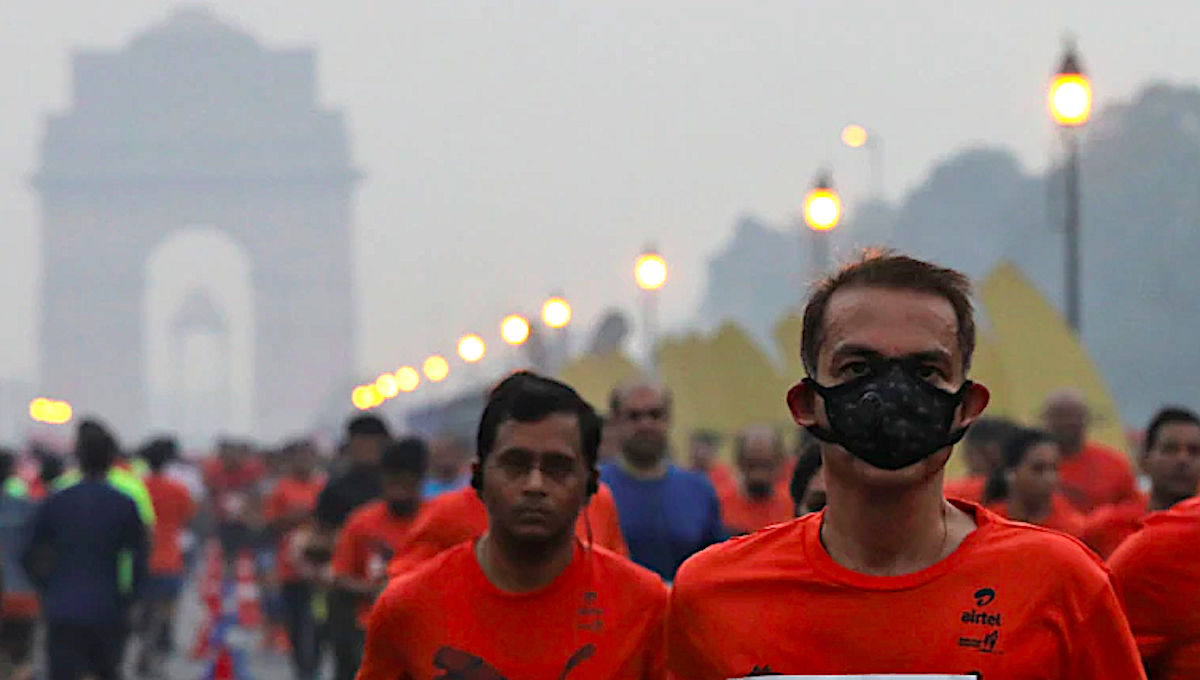 It is the State’s duty under the Directive Principles (Article 48A) of the Indian Constitution as well as the citizens’ responsibility under Article 51(g) of the Fundamental duties to ensure clean air and a healthy environment. Over the years, we have noticed the Supreme Court laying down certain principles when it comes to securing a clean and healthy environment.

[dropcap]T[/dropcap]he interactions between humans and the environment yield numerous benefits and lead to both sustainable growth and development. However, overutilisation, exhaustion of resources and overpopulation has caused significant and constant deterioration in the quality of air. Almost every year, in the National Capital Region (India), the quality of air in the month of October and November is on high alert. The cause of this alarmingly high levels of air pollution are multiple and cannot be attributed to one single source.

The festival of lights and the deterioration of air

Deepawali, the festival of lights is usually celebrated in the month of October or November. Interestingly, this time period also coincides with crop burning in the states of Haryana and Punjab. These factors coupled with hazardous vehicular emissions and stagnant winds in the geographical location; all contribute to the poisonous air in the region.

The Central Pollution Control Board (CPBC) with a budget of 100 crores (RTI response) records data on the quality of air during the month of Deepawali. When the data is plotted on a graph by taking a comparative analysis of four years, we notice an upward trend of the PM 2.5 levels:

The above graph is based on ‘PM’ or particulate matter. It is a common indicator of air pollution and is a culmination of several components such as sulfates, nitrates, ammonia etc. all of which have direct health negative effects. PM 2.5 for example, can directly penetrate the lungs and lodge itself in the blood stream. The prescribed safe limit set by the World Health Organization is 10 (annual) and 25 (24 hour) micrograms per cubic metre of PM 2.5. However, Indian standards provide some leeway in comparison to set guidelines as the prescribed limit goes up to 40 (annually) and 60 (24 hour) micrograms per cubic metre.

This year, it is quite evident that the initiative of the state to curb air pollution has been abysmal but more importantly, the burden of the toxic air is borne by the common people of Delhi, who do not live in a safe space characterised by air purifiers and expensive masks. However, as noted by the Board: last year Deepawali was observed on October 19 whereas this year the festival was celebrated on November 7, which has different meteorological conditions that govern the dispersion pattern of pollutants. For example, in the locality of Janakpuri, we see the PM 2.5 levels snowballing into severe levels (crossing the 900 mark). Further, there is also a stark difference between the two days as seen in the image above which provides sufficient proof to the perilous nature of the otherwise ‘fun’ activity.

Supreme Court to the rescue?

The reduction in air pollution in 2017 can be partly attributed to the Supreme Court order in Arjun Gopal & Ors. v. Union of India which temporarily banned the sale of firecrackers in Delhi, acting as a limited deterrent to the otherwise booming industry. They did so in order to ‘test whether it would have a positive effect’ on the quality of air. While it is true that burning of firecrackers is not the only cause, however, it must be acknowledged that it contributes to air pollution in a significant way, which the judgement dealt with in a positive manner.

The final result was an improvement in the Air Quality Index scale which measured 326 in comparison to 2016 where the AQI had crossed 420. Make no mistake; all numbers presented are still considered very poor in terms of quality of air. This year, the flimsy guidelines issued by the apex court were to burn ‘green crackers’ for a two-hour duration. This being ordered even though tangible benefits had arisen from the ‘experiment’ conducted last year. Looking beyond the fact that the order literally came two weeks before the festival (October 23), the court also directed the police to monitor the bursting of ‘green crackers’, so as to ensure it is within the time limit. Resources which weren’t available were being directed to prevent something which wasn’t exactly discernable. Simply put, the order fails to limit the number of firecrackers burnt and only allots a time to burn the exact same quantity.

This year, the flimsy guidelines issued by the Supreme Court were to burn ‘green crackers’ for a two-hour duration. This being ordered even though tangible benefits had arisen from the ‘experiment’ conducted last year

Thus, it’s no surprise that the order was not complied with. The implementation was always going to be an uphill task. The 54-page judgement ultimately went up in flames along with these mysterious green crackers which nobody seemed to possess during the festival. Further, differentiating a green firecracker from a general one remains a puzzle for the police, traders and the general public. The only medal that the judiciary deserves in handling the problem is that of accepting and acknowledging that the issue exists.

Nevertheless, since no temporary ban was present, the guidelines were openly flouted under the garb of ‘celebration’ which resulted in hazardous amounts of pollutants in the air as can be seen from the image below:

What does the state machinery have to say?

It is the state’s duty under the Directive Principles (Article 48A) of the Indian Constitution as well as the citizens responsibility under Article 51(g) of the Fundamental duties to ensure clean air and a healthy environment.

Over the years, we have noticed the Supreme Court laying down certain principles when it comes to securing a clean and healthy environment. Such preventive measures under sustainable development possess its own merits and demerits. Due to the fact that certain environmental regulations operate on high levels of uncertainty, a ‘precautionary principle’ was developed (Vellore Citizens Welfare Forum v. Union of India) which provides that lack of any scientific certainty should not be the sole cause for postponing the preventive measures against pollution. A similar line of reasoning was used in 2017 where the court ordered a temporary ban on the sale of firecrackers.

The state machineries have also relied upon the ‘polluter pays principle’ which states that the polluting industry shall be held accountable for the risk and damage that it causes. A contemporary example of this concept may be an EEC tax, which is issued on light and heavy-duty goods which enter the state of Delhi

The state machineries have also relied upon the ‘polluter pays principle’ which states that the polluting industry shall be held accountable for the risk and damage that it causes. A contemporary example of this concept may be an EEC tax, which is issued on light and heavy-duty goods which enter the state of Delhi. The amount collected must be utilised for purposes related to the promotion of public transport and improvement of roads for vulnerable users (RTI Response).

Moreover, as per the ‘Public Trust Doctrine’, developed in the case of M.C. Mehta v. Kamal Nath & Ors. the state must ensure that natural resources are available for public utilisation and pleasure. In addition to such values embedded in environmental law; constitutional safeguards (Article 21) guarantee each citizen the right to a safe environment. Despite such normative and strong pillars existing protecting the environment, only concrete cumulative action by the state can do some benefit for the public.

The underlying issue with respect to the judiciary taking upon an active role is the conflicting social interests which emerge. The daunting task of drawing the line between the right to livelihood and the right to a safe environment was answered by Justice Sikri this year itself. The argument raised by producers and traders of firecrackers is twofold; that of economic hardship affecting them and their industry and economic losses impacting the state.  Ultimately, the moral trade off faced by the court is that of health versus economic losses.

The court reasoned their order by pitching monetary losses against health concerns and subsequently placed great importance on the latter. Health hazards such as asthma, breathlessness, nausea, cognitive impairment and any such social cost when translated into tangible monetary costs of treatment outweigh the potential revenue that the state may generate. The court went through all the trouble of establishing a balance (only a prima facie reasoning) between the rights of traders and health concerns only to dictate an order which nobody really understood.