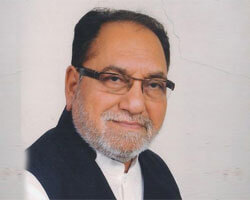 “The Bill, by allowing a fair procedure of dissolution of marriage, aims to capture the spirit of Constitution as well as Islam”, says Husain Dalwai

On 5th August, 2016, Husain Dalwai, a Rajya Sabha Member of Parliament introduced a private member bill to codify the practice of Talaq.  In this exclusive interview, given to Maansi Verma, Mr. Dalwai shares valuable insights on The Dissolution of Muslim Marriage Bill, 2016.

How do you react to the judgment in the Triple Talaq matter? What connections do you see in the judgement and your own Bill in the parliament?

The judgement is trying to do the same thing that I have tried to do by introducing the Private Member Bill last year. I congratulate all the petitioners in keeping up this fight with courage and tenacity. I welcome the judgment and appreciate the far reaching consequences it is likely to have in advancing the process for bringing in a just and fair law to regulate divorces.

It is heartening to see that the entire nation iscelebrating the victory of Muslim women, especially the government, but empowerment ofwomen is a secular agenda – it is not limited to any community or religion. I sincerely hope thatthe plight of the lakhs of deserted women is also addressed with the same vigour.

We should remember that the process of reform in any society isgradual and excruciating. This is not something limited to Muslim community. Over the years,several governments have resisted bringing widespread reforms especially when it is likely tocause backlash – this is what resulted in shelving the Hindu Code Bill drafted by Dr. Ambedkaras it was believed that theHindu society wasn’t ready for it. But I believe that now, this new generation of youth which iseducated and aware would lead the change. The time is ripe now to initiate a process for bringingin place a just and fair law to regulate divorces and I hope to make some contribution in thisregard through the Bill I had introduced.

Please share with us the motivation behind introducing the Dissolution of Muslim Marriage Bill.

The motivation dates back to 1967 when as a young man of 25, I participated in a protest march organized by my elder brother Hamid Dalwai, against the ills of Triple Talaq. That march, attended by 7 Muslim women – one was my Bhabhi, Hamid Bhai’s wife and another was our sister, Fatima, who later became an activist within the Socialist movement – is recounted as one of the boldest examples of a movement of progressive Muslims led by my brother. After my brother passed away at the young age of 44, I carried on with the struggle of advocating for reforms within the society, especially focusing on education and gender justice. When I became a parliamentarian, this Bill came aboutas a natural progression of things.

I had received many representations about Triple Talaqfrom organizations advocating for justice. This Bill has been drafted to address many demands from women. It tries to correct a historic wrong and to respond to changing times. In this time and age, it is neither agreeable nor feasible that women be relegated to such a vulnerable position in the family where men can exercise whimsical control over them. Women must be recognized as making equal contribution to the welfare of the family. Disempowering women destroys the prospects of her being financially or materially independent, adversely affects their children, in particular, and the family in general. All such practices which have such negative effect on women, and by extension on the society, must be shunned.

Any previous efforts to this end?

One striking memory which comes to mind is the struggle prompted by the Shah Bano judgment. It was a judgment which rightly recognized the right of Muslim women to demand maintenance from their husbands. I believe, that as a secular criminal law recognizing the right of dependents to claim maintenance, it should not have been confused with religious rights guaranteed under the Constitution. We opposed the government’s attempts, at that time, to dilute the ruling by launching protests and marches under the banner of ‘Tarakki-pasand Muslimeen’.

What does the Bill strive to achieve?

It must be noted that Talaq per se is not undesirable. Though the advent of divorce in Indian family laws is seen as a modern development, Islam had, since time immemorial, recognized marriage as a contract between two consenting parties and provided them the option of opting out.Though the advent of divorce in familylaws is a rather modern development, Islam had, since time immemorial, provided either or bothparties the option of opting out – since it is a relationship based on consent, absence of consent could culminate in divorce.

Yet Quran permits Talaq only when serious deliberations havehappened between both the parties and therefore provided for a procedure which requiredpronouncement of Talaq thrice over a prolonged period of time during which the parties weredirected to attempt reconciliation with the help of family members.Triple Talaq,however, is an aberration.

Even the main argument advanced in its defense is flawed – that it is a practice bad in theology but good in law – why should the law be constrained to uphold a practice which doesn’t enjoy Quranic sanction? Even before the Supreme Court became seized of the matter – deciding whether Triple Talaq is constitutional or not – in many judgments by several high courts Triple Talaq was deemed arbitrary, unjust and inhuman. It is a practice which caused great hardship to women, as relations could be destroyed in a matter of seconds, sometimes deliberately and sometimes in an agitated, inebriated or insane condition of mind. And with the aid of technology – over phone, email or even Whatsapp.

Many Islamic countries – Egypt, Lebanon, Iraq, Morocco – have gone on to codify the procedure of Talaq in order to bring certainty, uniformity, protect the rights of the parties involved and do not recognize Triple Talaq as a proper form of divorce. India is also bound by its commitments under international laws – the Convention on Elimination of All Forms of Discrimination Against Women to take all steps – including legislative measures – to ensure that women have equal rights at par with their male counterparts.

India is governed by a Constitution which not only provides for protection of minorities, women and children but does so in a manner which strikes a balance between respecting their faiths and beliefs and upholding their rights.

The Bill, by allowing a fair procedure of dissolution of marriage, aims to capture the spirit of Constitution as well as Islam.

What are the salient features of the Bill?

The Bill is intended to replace the Dissolution of Muslim Marriage Act, 1939 which laid down a procedure for Muslim women to approach court for dissolution of their marriage.

Also Read the full text of the Bill here.

Do you expect any resistance to this Bill?

It is heartening to see that the Supreme Court verdict has been welcomed by the community in general. The verdict invalidates the practice of Triple Talaq without compromising any other aspect of personal laws. The Bill also intends to achieve the same purpose – it codifies the procedure of dissolution of marriage without affecting any other aspect of Muslim personal laws. It presents an opportunity for the Muslim community to herald an era of reform to address the long standing demand of Muslim women. It is for this reason, I am confident, that there will be no resistance from the Muslim community which must seize this moment to drive change from within. Having said this, we must be vigilant against those political elements who may try to communalize the situation in order to further their divisive agenda. I am hopeful that Indian people will not be swayed by malicious propaganda and will extend their support to this reform.

You have been part of various struggles for justice and reform. Share with us some striking memories.

For 50 years now I have been a participant of struggles for justice for groups and peoplesthat are oppressed and relegated to the margins. I was a Socialist and was influenced by Dr. Lohiya and MadhuLimaye. I have been a trade unionist and carried the mandate of labour welfare into my role of aLabour Minister in the state of Maharashtra. I was part of the NamanterAndolan, the Name Change Movement of the Dalits for recognition and identity that changed the title of Marathwada university toDr. BabasahebAmbedkarMarathwada University. I was a witness to the forming of the Dalit Panthers and travelled to the Atrocity ridden villages.

I supported the Mandal Commission and the implementation of reservation for the backward classes. Post Mandal, Muslim OBCs came to be recognized as a marginalized section and later Sacchar committee reiterated this, I have been lobbying for the Muslim OBCs to receive benefits of reservations.

Currently I head an organization called the Maulana Azad VicharManch which routinely organizes programs for the welfare of people of all religions, castes and gender and works towards maintaining peace and harmony in the society.

What would be the next steps now?

I am eager to work with the members of the community in further strengthening this Bill and in building a consensus on the same. I will also be working with the government as it has now been mandated to bring a law in this regard. Since the Bill has already been introduced, I am hopeful that it may come up for discussion in the Winter Session. As a Member of Parliament, I look forward to legislating on this subject soon.

Maansi Verma, a lawyer and policy enthusiast, is a LAMB fellow. She had assisted Mr. Dalwai in researching on and drafting this Bill.