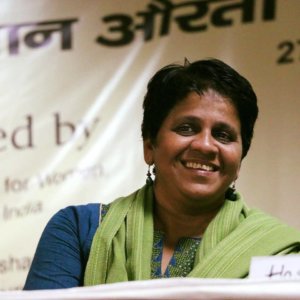 “Our interest is not limited to triple talaq, we’re aiming towards abolishing discriminatory personal laws” says, Hasina Khan, the founder of Bebaak Collective

Hasina Khan, the founder of Bebaak Collective, one of the petitioners in the ‘Triple Talaq’ case in conversation with Ankita Ramgopal. Hasina in this interview talks about the struggles of the women and gives us an insight to the reactions of the community after the judgment.

Can you tell us a little bit the work you and your organisation do in the field of Muslim women’s rights?

Bebaak Collective is a new organisation which was started last year. We’d held a convention to put pressure on the State for social security and equal citizen rights and Muslim women’s rights to constitutional law. It took off from there. As a collective we have supported women who take up their issues in Court. That’s why, when we heard of Shayara Bano’s story, we felt the need to intervene.

Personally, I’ve been associated with the Muslim Women’s organisations at the grassroots level for over 30 years. I’ve previously worked with Awaaz-e-Niswan where I worked on gender discrimination, religious, fundamentalism, sexuality rights at the grassroot level. Since the early 90s we’ve been taking up the issues of personal laws within the community itself. We worked with All India Muslim Personal Law Board and try to make them aware of issues women deal with within the community, but it didn’t result in actual change. That’s when we realised that there was no initiative to change personal laws within the community. We need to take the route of Constitutional rights and reach out to the judicial system to deal with the issue of discriminating personal laws.

What were efforts taken by Muslim Women’s organisations before the petition was filed in court?

I’ve been seeing this practice since the 90s when it became notoriously popular, when husbands would pronounce talaq on the phone, or write it to their wives in letters.

In certain instances, they’d leave a note at the doorstep of the wife, with no warning being given to the wives beforehand. Since the last 15 years, with technology it has moved on to Facebook messages, Whatsapp, Email and through which instant talaq is pronounced. Technology in this sense hasn’t come to the aid of women. It has put them in a precarious position.

Whenever women have come to us and wanted to file cases as individuals we’ve tried to provide all the support we can. For the past couple of decades, we’ve been working to assist women dealing with issues of triple talaq, polygamy, property rights. Many case have been taken to court. The way it’s being portrayed in the media, it seems like it’s a recent issue, but we’ve been dealing with cases of triple talaq for decades.

Within women’s movement in the last 30-35 years there have been Muslim women focussing on eradicating the discriminatory practices in personal laws. These women should get the recognition for this victory. Even before Shah Bano and Shayara Bano, there have been multiple Muslim women who have fought against these discriminatory practices. The issue of triple talaq has been carried forward by such Muslim women along with the support of women in the larger women’s movement. There is no one person who has caused this change. It has come about after a collective effort. The State should not take the credit a victory that belongs to this collective.

Our interest is not limited to triple talaq, as a collective, we’re aiming for large scale changes like abolishment of all discriminatory personal laws. Personal laws should focus on protection of personal rights, rather than discriminate.

Gender just laws are very essential, and the marginalized groups within a community should be recognized by personal laws. Our marriage laws are also deeply problematic. While marriage is a contract, divorce is not seen as the same since it can be terminated by one party.

Some people have made the argument that with statutes such as the Domestic Violence Act in place, there is a forum for women to tackle with issues of violence in the household, therefore sufficient measures are in place for protection of women. However, it is important to talk about personal laws as well. While Domestic Violence Act talks about my matrimonial rights, personal laws cover all issues from birth to death. Both need to be discussed simultaneously. Now triple talaq is declared invalid, women have more rights than they did previously.

When we heard Shayara Bano’s story, we felt we need to support her. Whenever a woman goes to court taking up matters like this, and it gets covered in the media, there is a lot of pressure on her.

What were the struggles you had to deal with within the community?

There has been a lot of support coming from within the community since a lot of people have been tired with this practice and found it embarrassing to be associated with it. There are definitely some elements in the community who were critical of our actions, and accused us of playing into the hands of the majoritarian government. However, we’re aware that no government, whichever be the party in majority, has ever been supportive of the Muslim Women’s cause for equality.

We needed to clarify our stance, that we took the route of seeking help from the court, not the government. There has been talk of the government supporting the issue, however, it is important to note the difference in their definition of gender justice and our own submissions.

We’ve been fighting for this cause for almost 30 years, people are rejoicing with the victory. Women are becoming politically conscious, aware of their rights. You and I may be having an intellectual discussion on the nuances of the judgment, but if you step out of your circle of legal community and go to the common woman and ask her how she feels now that triple talaq has been declared invalid you’ll see the joy on her face.

Before the judgment was passed, did you expect the verdict in your favour?

During the course of the hearings I was nervous I didn’t know which way it would go. I felt that the judiciary may not want to touch the personal laws. However, there was hope in our hearts somewhere that it would go our way. We expected instant triple talaq would be declared invalid.

What was your opinion of the reasoning given in the judgment while arriving at the decision?

It isn’t a perfect judgment, there are a few problems with it. The minority judgment makes a lot of problematic assumptions, but we must acknowledge that it is positive outcome that at the end of the day. Triple talaq has been declared invalid.

What according to you will be the implications of the judgment on the social conditions of women?

The implications of the judgment are already being witnessed. We’ve heard of instances where maulanas have refused granting triple talaq to husbands seeking divorce through this route, after the passing of judgment so the effects can already be seen. More women have become politically conscious within the community as a result of this. However, with organisations such as Raza Academy and the All India Muslim Personal Law Board, with whom we’ve worked closely previously on multiple issues, there is a sense of alienation. However, at the same time I think the backlash wasn’t as bad as expected because the judgment hasn’t really threatened the position of personal laws despite holding triple talaq invalid. It has been declared invalid on the basis of it being unislamic, rather than unconstitutional.

Ankita Ramgopal is Research and Advocacy Officer at Lawyers Collective.