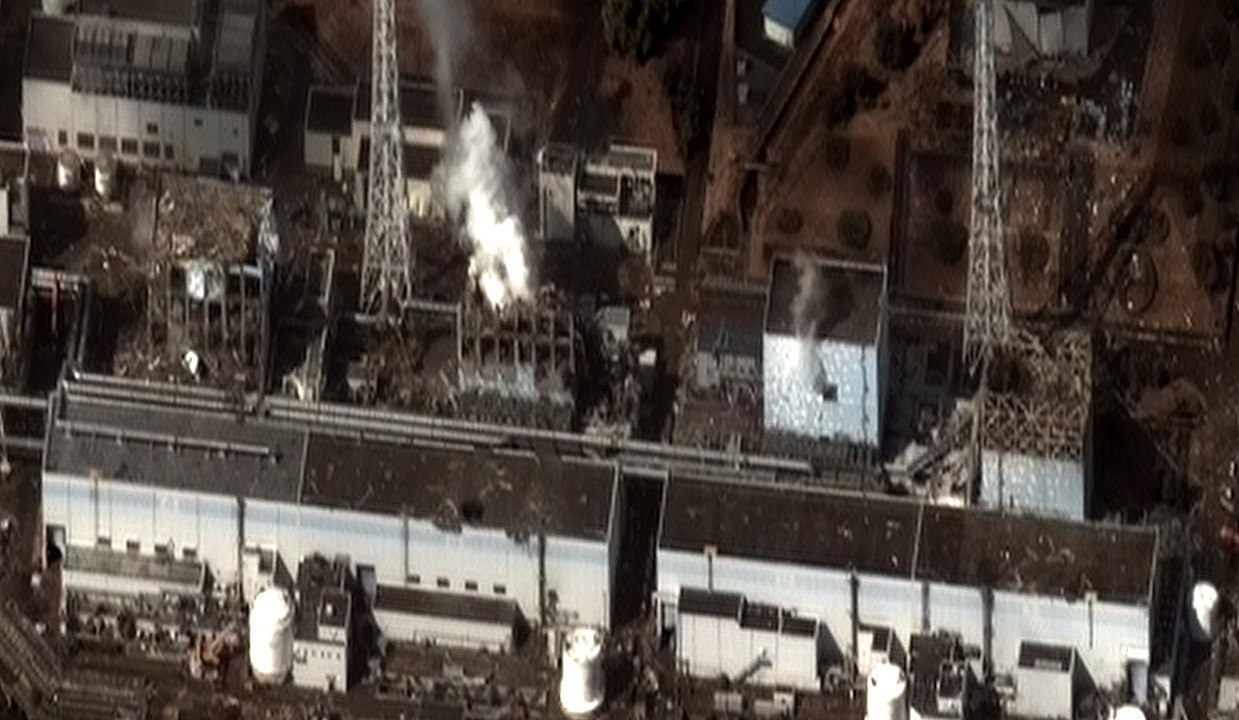 Next year, the operator of the tsunami-hit Fukushima nuclear plant would start releasing radioactive water into the Pacific Ocean. A number of nations are up in arms against it, but Indian authorities are not rising to the occasion to protect its most vulnerable against the impending disaster. SONALI HURIA explains what is at stake for people and the environment.

THE new year has begun on a grim note with a toxic gas leak at the Rourkela Steel Plant in Odisha on 6 January, which claimed the lives of four contractual workers. This is the latest in a disconcerting string of industrial accidents in India over the last few years, which have remained peripheral to the mainstream media narrative.

It appears that India has learned precious little from the Bhopal gas disaster, which has ebbed from public memory even as the accident site remains contaminated and survivors continue to await an elusive justice.

Against this backdrop, as we approach the tenth anniversary of the Fukushima nuclear disaster, it may be pertinent to think of what a nuclear accident might mean for the country’s already shoddy industrial safety record and systemic inadequacies, especially as the Fukushima disaster now poses a formidable new challenge to which India’s response, so far, has been active denial and muted silence.

“Fukushima” has become synonymous with the devastating and ongoing nuclear accident that occurred off the eastern Pacific coast of Japan in 2011.

Also Read: In a Season of Impetuous Lawmaking, whither Nuclear Safety?

Among the many vexing problems precipitated by the accident is the disposal of the contaminated water from the beleaguered nuclear plant.

The acerbic debate within Japan on the disposal of this radioactive water came to a head recently when the Japanese government made it clear that beginning 2022, the operator of the Fukushima plant, the Tokyo Electric Power Company (TEPCO), would start releasing radioactive water from the wrecked plant into the Pacific Ocean—a task envisaged to be accomplished over the next several years as part of larger decommissioning efforts.

Since the devastating earthquake and tsunami off the Pacific coast of Tōhoku triggered a meltdown at the three units of the nuclear plant in March 2011, cleanup efforts have required, among other things, the pumping of tens of thousands of tons of water to cool the smouldering reactor fuel cores.

The acerbic debate within Japan on the disposal of this radioactive water came to a head recently when the Japanese government made it clear that beginning in 2022, the operator of the Fukushima plant, the Tokyo Electric Power Company (TEPCO), would start releasing radioactive water from the wrecked plant into the Pacific Ocean

However, this has led to a steady on-site accumulation of heavily contaminated water—as of 2020, TEPCO has nearly 1.23 million metric tons (and counting) of highly radioactive wastewater on its hands that has been stored in nearly 1,044 tanks.

The water comprises injected cooling water as well as groundwater that has seeped into the subterranean levels of the plant since the accident.

Contestations around what must be done with the contaminated water have long gripped public debate in Japan, with civil society, industry, and the government sharply divided on possible measures. Among the most vocal critics of the proposed decision are fishing and farmer collectives, who fear that seafood and farm produce from the region will once again be spurned nationally and internationally, and their painstaking effort to rebuild these sectors and resurrect consumer confidence since the accident will come to naught.

The Japanese government, however, has made no bones that it regards the dumping of the wastewater into the ocean as the most pragmatic and economic solution to this rather confounding problem—a decision which it has been actively vocalising since at least the last few years. Its assertions have now been backed by its own expert advisory panel set up in 2016, which in addition to ocean-dumping has also recommended “vapour release” of this highly radioactive water or a “combination of both methods”.

This course of action is proposed based on TEPCO’s two consistent claims—both vigorously contested by civil society and environmental groups.

First, that TEPCO will run out of on-site storage space by 2022, and that the stored water is hampering efforts to decommission the plant.

Also Read: How India is engineering nuclear landscapes through charades of green clearance

Greenpeace International has warned that carbon-14, which TEPCO affirmed is present in the contaminated tank-water for the first time in August 2020, has the “potential to damage human DNA”.

The Republic of Korea, China, and Chile, state parties to the London Convention on the Prevention of Marine Pollution by Dumping of Wastes and Other Matter, have repeatedly called for international deliberation and resolution of the problem, even as South Korea, which has banned all seafood imports from the region since the accident, has formally called upon the International Atomic Energy Agency (IAEA) to dissuade Japan. While the North Korean state media described the proposed discharge as a “criminal act”, a coalition of environmental and citizens’ groups from Taiwan petitioned the Japanese government in November 2020, expressing their objections.

The IAEA has confined itself to assisting the Japanese government rather than question or evaluates the proposed water disposal plan. It has demonstrated yet again that it is not the international nuclear watchdog many believe it to be.

UN Special Rapporteurs on hazardous wastes, right to food, rights to assembly and association, and the rights of indigenous people have also urged Japan not to use the present pandemic as a “sleight of hand” to release the radioactive water without any credible consultation within and outside Japan regarding a decision that will have a long-lasting impact on the environment and human health.

The stakes for India cannot be overstated either.

In an unanticipated moment of candidness, nuclear health scientists from within the Indian establishment—the Defence Research Development Organisation (DRDO) and the All India Institute of Medical Sciences (AIIMS)—have warned that the release of the Fukushima wastewater containing “radioactive isotopes such as cesium, tritium, cobalt and carbon-12” will prove disastrous for human and aquatic health across the world’s coastal belts by crippling fishing economies and causing a “spectrum of diseases, including cancer”.

Prof Yudhavir Singh from AIIMS reportedly said that “radioactive isotopes are carcinogenic and can induce cancer on prolonged exposure”.

Drawing on studies on radiation leaks from across the world, he adds that “in Chernobyl… (one has) seen the rise of thyroid cancer post (the) nuclear leakage after 20 years”.

This acknowledgment is rather uncharacteristic, given the Indian government, in particular, its nuclear establishment, has consistently downplayed the risks associated with nuclear energy to public and environmental health, even labelling public concerns surrounding radiation “myths”, and whose first reactions to the Fukushima nuclear accident were of impudent denial.

In tandem with these warnings, EAS Sarma, former Union Power Secretary to the Government of India, has exhorted the Department of Atomic Energy (DAE) to apprise the Prime Minister’s Office of the “far-reaching implications” of the proposed release of the radioactive Fukushima water, and for India to take a firm stand at the IAEA against this unilateral decision of the Japanese government.

TEPCO has reportedly already been draining hundreds of tonnes of contaminated water into the Pacific Ocean. Noting with dismay the abject silence of the DAE and India’s Environment Ministry in this regard, Sarma identifies the lack of a robust nuclear regulatory body or mechanism in India as responsible for this lack luster approach to an issue of great import for the health of the people of the country and the larger marine ecology of the region.

Domestically, it is time to pause and think whether India is equipped to handle an accident of the scale of Fukushima—a nuclear Bhopal?

Sarma’s letter to the Cabinet Secretary also underscores the need for the government to recognise the magnitude of the devastation wrought by nuclear accidents, the inability of TEPCO to handle the disaster even a decade since its occurrence, and thus to pause its own plans “to import reactors on a large scale and enlarge nuclear power generation capacity”.

Notwithstanding these wide-ranging concerns, the IAEA has expressed its unreserved support and has chosen to confine itself to assisting the Japanese government rather than question or evaluate the proposed water disposal plan.

In effect, therefore, the IAEA has demonstrated yet again that it is not the international nuclear watchdog many believe it to be. In her fascinating new account of the Chernobyl nuclear accident, Manual for Survival, the environmental historian, Kate Brown, explores the IAEA’s complicity in downplaying the accident and denying radiation impacts in exposed Chernobyl children and even asserting that “radiation anxiety” stems from “irrational fears”, as nuclear technocrats across the globe are prone to doing.

In the tenth year of the ongoing Fukushima accident, therefore, it is imperative that a dialogue be initiated on the need for an effective international nuclear monitoring regime that isn’t also tasked with the responsibility of promoting nuclear energy.

Domestically, it is time to pause and think whether India is equipped to handle an accident of the scale of Fukushima—a nuclear Bhopal?

At the very least, it is time India’s government demonstrates that it is willing and able to deploy its purportedly surging international stature and influence under Prime Minister Narendra Modi to protect the country’s environment and the health of its vulnerable communities against the Fukushima water release, which appears a near certainty now.

(Sonali Huria is the 2021 Fellow, Takagi Fund for Citizen Science, Japan and has completed her PhD from Jamia Millia Islamia University where her research was focused on the people’s resistance in India against nuclear energy and the post-colonial state’s repressive responses. The views are personal.)