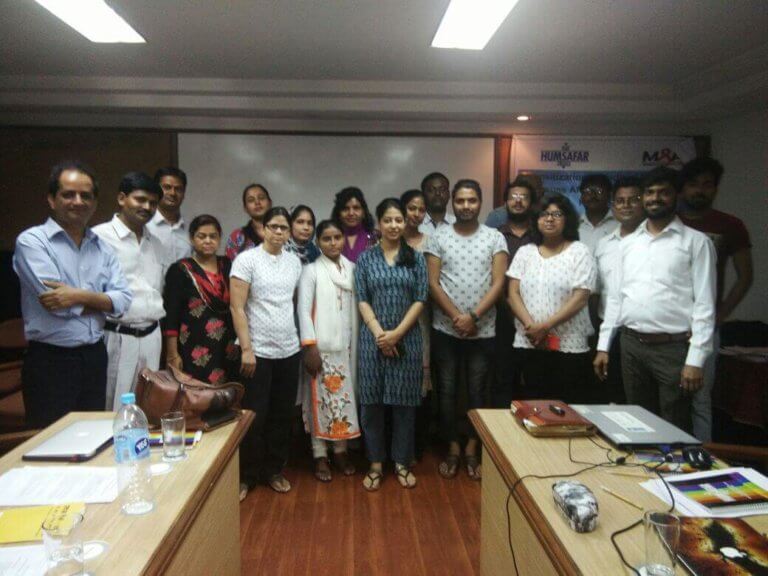 Report on Legal Training Workshop on ‘Sensitization of Judicial Members on Issues Affecting Men who have Sex with Men & Transgender Persons re: HIV and Human Rights’

The Lucknow legal training workshop was organized by The Humsafar Trust to develop a network of LGBT ally lawyers in Lucknow and neighbouring districts. The participants mostly consisted of local independent lawyers, lawyers working with women’s rights groups like Association for Advocacy and Legal Initiative (AALI) as well as district legal aid lawyers.

Yadavendra Singh of Humsafar discussed conceptual issues on sex, gender, sexual orientation and gender identity with the participants and markedly brought out some of the apparent fault-lines in the women’s rights movement’s engagement with the transgender rights movement’s – while the former treats ‘gender’ as a ‘social construct’ the latter treats ‘gender identity’ as a ‘deeply felt and internal sense of gender’. However, as per international and domestic socio-legal consensus at present, the recognition of gender identity is a fundamental right in law. The processes of ‘gender play’ – how social, cultural, economic and other forces influence and shape our understanding of gender as well as identity, will play out to reconcile the differences in the two movements ahead.

Lawyers in attendance asked questions on subjects relating to transgender rights that are contentious issues even within the transgender community. For instance, one lawyer asked, “Whether a person identifying as transgender shall be required to submit ‘proof’ of gender identity?” Participants are encouraged to :-

One participant asked a particularly prescient question in the context of rights of intersex persons – “Does an intersex person, who identifies as male but is raised as female by the family, possess any legal claim against the forcible genital corrective surgery performed by medical professional’s on parents’ advise at time of birth?”. At present, there are no medical or legal guidelines in India governing the right of intersex persons against forced genital mutilation / correction surgery or medical authorities’ duty with respect to ‘best interests of the patient’. These questions may have answers in due course of time with necessary clarity in medical obligation towards intersex persons and developments in law in this regard.

Participants in attendance also engaged with relevant and emerging contentious issues in the area of transgender rights. With the Calcutta High Court (Sumita Kumari v. State of West Bengal, 2015) and Patna High Court (Sangeeta Hijra v. State of Bihar, 2017) raising the question “Are trans-women ‘women’?” and the Madras High Court (Annapoornam v. Secy. to Govt., Personnel and Administrative Reforms Dept., 2016) struggling to deal with the question of, “…whether women per se deserve more compassion and sympathy than transgenders…”, participants appeared to be cognizant of the potential conflict of interests between legal recognition of self-determined gender identity vis-à-vis equal treatment before law in the self-determined gender identity.

In limited circumstances where transgender persons are denied access to benefits in self-determined gender identity due to dissonance in the identity of person and ‘intended beneficiary’, the State must justify differential treatment on the standard of Article 14 of the Constitution. For instance, any differential treatment of ‘women’ and ‘transgender women’ must satisfy the twin tests of Article 14: (a) it must be based on intelligible differentia; and (b) it must bear rational nexus with the object to be achieved.

Participants demonstrated keen interest in following legal developments w.r.t. LGBTI-rights in India, as well as offering legal advise and representation to LGBTI clients in the State of Uttar Pradesh.