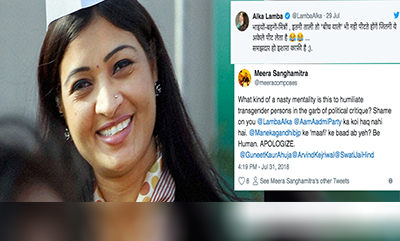 [dropcap]T[/dropcap]rans community and its allies have submitted a memorandum to Chief Minister of Delhi, Arvind Kejriwal, against his party (AAP)  member and serving MLA Alka Lamba for stereotyping the trans community by calling them “beech wale” who clap loudly (“thaali peetna”). Despite being called out on Twitter for her transphobic remarks, she has neither pulled down her tweet, nor has apologised for it.

What kind of a nasty mentality is this to humiliate transgender persons in the garb of political critique? Shame on you @LambaAlka @AamAadmiParty ka koi haq nahi hai. @Manekagandhibjp ke ‘maafi’ ke baad ab yeh? Be Human. APOLOGIZE.
@GuneetKaurAhuja@ArvindKejriwal@SwatiJaiHind

On another occasion Maneka Gandhi, during the course of discussion on Trafficking of Persons (Prevention, Protection and Rehabilitation) Bill, 2018 on July 26, sniggered and called the trans community “the other”. It was followed by the laughter from the Members of Parliament present in the House.

In India, the trans community is highly vulnerable to abuses — both physical and mental — and becomes a subject of mockery. The above-mentioned Bill in discussion has a huge impact on the trans community. When the laws makers snigger and “other” a community, one is not surprised that the same mindset is reflected in the law.

However, when called out on Twitter, Maneka Gandhi posted a public apology for calling “the other one”. She said she did not snigger but was embarrassed at her own “lack of knowledge”.

I sincerely apologise for using the term ‘other ones’ during the debate on the Trafficking of Persons (Prevention, Protection and Rehabilitation) Bill, 2018, in Lok Sabha. I did not ‘snigger’, I was embarrassed at my own lack of knowledge.

Memorandum to the Chief Minister, Delhi condemning the derogatory, anti-transgender person remarks by Ms. Alka Lamba, AAP MLA and calling for immediate withdrawal of the same, with a public apology.

The object of writing this letter to you is the welfare and the dignity of the transgender community. On the 29th of July, Ms. Alka Lamba, one of your party members and serving MLA from Chandni Chowk constituency, took to the online platform of Twitter to pass a comment on someone, understandably a political critique. In doing so, she referred to transgender persons as “beech wale” who clap loudly (“thaali peetna”). Her exact statement (translated into English) was this: “Even the ‘middle ones’ don’t clap so much as this person does single handedly ! Clever people understand by a mere gesture”.

We take severe offense at the fact that your party member and sitting MLA chose to ridicule trans people, to make her point about a third party, and that she used a deeply disrespectful and stereotyped reference to transgender persons. Further, despite she being notified of the same
and being asked to withdraw the tweet as well as apologize by numerous people, she has neither pulled down the tweet nor has she apologized to the transgender community. The link to the tweet is here and a screenshot of the tweet (as it exists online today is attached)

This development comes at a time when your government has taken a progressive step to establish a Transgender Welfare Board in Delhi, after pursuit by friends from the transgender community, and it sullies the record of your party and the efforts of all those sensitive individuals in your party. How can a government trying to take steps towards the welfare of a community simultaneously allow its members to degrade the same community?

We wish to make it clear that it is not our objective to name and shame people, but what Alka Lamba did was not only wrong, it was extremely humiliating for an entire community and we hope she realizes the gravity of this. As your good self must be aware, just a few days back, Ms. Maneka Gandhi, the Union Minister for Women and Child Development also made some derogatory remarks and gestures about transgender persons inside the Parliament and had to apologize, owing to intense public pressure. While it is anybody’s discretion to criticize someone in a constructive way, it is definitely not alright to offend and denigrate a whole section of people in the garb of ‘critique’ of some third party or on the pretext of ‘lack of knowledge’.

It needs not reiteration that transgender individuals are human beings and equal citizens, with all rights under the Constitution as well as per the judgement of the Apex Court in NALSA and we deserve to be treated with dignity. We, therefore, demand an immediate public apology from Ms. Lamba for her tweet and a withdrawal of the same. We also demand that AAP must issue a statement publicly condemning this tweet of its sitting MLA and assure the transgender community, especially in Delhi, that it would fully respect and implement the judgement of the Hon’ble Supreme Court in NALSA versus Union of India, in all aspects and particularly would adopt a zero-tolerance approach as regards discrimination of transgender persons.

We shall support any genuine efforts from your government towards the well-being and strengthening of rights of the transgender community and hope that such incidents will not happen again. We also urge you to take adequate and consistent measures to sensitize your party members, at all levels, to ensure they don’t conduct themselves in a manner that cause offense or harm to other people, especially the marginalized and vulnerable sections.