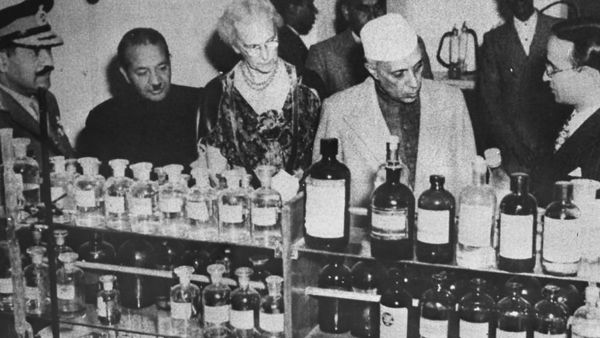 Nehru in the age of Coronavirus

[dropcap]H[/dropcap]UMANITY has been winning the war against epidemics because in the arms race between pathogens and doctors… Once scientists understood what causes epidemics, it became much easier to fight them. Vaccinations, antibiotics, improved hygiene, and a much better medical infrastructure have allowed humanity to gain the upper hand over its invisible predators…. global campaign of smallpox vaccination was so successful, that in 1979 the World Health Organization declared that humanity had won, and that smallpox had been completely eradicated”.

With 3,49,161 infections, worldwide and 15,297 deaths and still counting, Nehruvian vision of science and his efforts in creating a scientific society gains immense importance and relevance.

Science, according to Jawahar Lal Nehru, was the major triumph of the human mind which could liberate humankind from illness, want and misery. Nehru also understood the important role of scientific temper in nation-building. He wrote that the “search for truth and new knowledge, the refusal to accept anything without testing on trial, the capacity to change previous conclusions in the face of new evidence, the reliance on observed facts and not on preconceived theory, the hard discipline of the mind.”

Nehru’s interest in science and technology can be traced back to his opting for Science Tripos in Cambridge and his association with leading British scientists of the age like James Jeans, Arthur Eddington and others.

Nehru’s blueprint was twofold. Firstly, to replicate world-class institutions here in India. During his visit to the United States of America, he spent his time in understanding how the universities of America were giving the country the technical and scientific edge. His celebrated visit to the Massachusetts Institute of Technology in 1949 ultimately leads to the creation of the 5 iconic Indian Institutes of Technology in Kharagpur (1950), Bombay (1958), Madras (1959), Kanpur (1959), and Delhi (1961).

Secondly, his ability to induct the greatest scientific names of the times into nation-building. Vikram Sarabhai, Sir C V Raman, Homi J Bhabha, Sathish Dhawan, S S Bhatnagar and many others were to run the premium institutes of scientific learning and research.

Nehru was fully cognizant to the fact that science would require acceptance from society and support from the government to sustain and deliver. His limitless tenacity enabled in creating bureaucracies into engines of scientific advancement best exemplified by the creation of Department of Atomic Energy (1954), the Bhabha Atomic Research Centre (1954), the Physical Research Laboratory (1947), Indian Space Research Organisation (1962), Council of Scientific and Industrial Research (CSIR) (1942).

Detractors, then and now

Nehru’s had his detractors then, as in now. Pseudo-nationalism was invoked to subvert his scientific mission. “Science has no frontiers. Nobody ought to talk about English science, French science …  Science is bigger than the countries”. Equally important was the role of scientific temper in nation-building.

Nehru was alive to both the creative and destructive side of science. Therefore, it was integral to Nehru to work for world peace and evolve a cooperative venture involving all of humanity. He refused to participate in walls of conflicting ideologies and steered clear of the Cold War. It was an adventure which India could do without.

Small-pox killed the son and heir of the English Queen Anne in 1700 and numerous members of the aristocracy and upper classes. With a 14-day incubation period, the Covid-19 is no respecter of divisions of classes and masses. Viewed in this perspective, Nehru’s idea of public institutions adopting the utilitarian principle of the greatest good to the greatest number assumes significance.

In a time when misguided attempts are made to remove the word ‘socialist’ from the Preamble of the Constitution of India, it would do well to remember that post-independence, revolutionary attempts and mass campaigns were made by the socialist policies of the government to eradicate smallpox, polio,  plague and skewed the growth of many other deadly diseases.

Fighting the raging epidemics of the age

In the post-independent India, almost half the population lived in highly malarial areas and large-scale control operations commenced in 1953. In a span of a decade, malarial infections were so low that it was left to the local authorities. In 1951, smallpox-related deaths totalled 1,48,000 and in a span of 10 years, it was reduced to 12,300 deaths. Every 5-year plan began to dedicate more and more resources to fight these epidemics which was ravaging the population.

The plague which accounted for 3% of deaths around 1940 was completely eradicated by the middle of the 1950s. Also, herculean efforts were being made to control venereal diseases, leprosy, filariasis, diftheria, typhoid, whooping cough, pneumonia, meningitis, rabies which were endemic in the length and breadth of India was brought under control by public healthcare systems and accessible and affordable medicine and widespread government initiated vaccination programs.

Creating the infrastructure and training personnel

Along with huge resource allocations to fight epidemics, it was necessary to bring in a larger number of medical practitioners and for that build new medical colleges and upgrade existing ones. Medical colleges rose from 15 in 1946 to 81 in 1965 and the number of students admitted from 1200 /10,000 by the year 1965.

Exemplar is Kerala where successive governments of Congress party and the Communist Party have worked within the domain and parameter of a welfare state and have steadfastly refused to be strayed into privatisation and ensured ever-widening of its public health facilities. It is no wonder that Kerala is able to combat the Covid-19 virus better than some of the advanced countries of the world.

Nehruvian relevance is visible as the world fights the deadly pandemic. Affordable healthcare will certainly gain space given the fact that in the midst of this pandemic, nations which have invested in affordable public healthcare systems like China, Taiwan, Vietnam, Singapore, Cuba have been able to deal with it far greater efficiency than richer countries.

Nehru’s optimism and faith in man’s quest of science will always ring a bell in this age of Coronavirus. Man, he said “Man has hurled defiance at the elemental powers, and with his mind, cradle of revolution, sought to master them. Whatever gods there be, there is something godlike in man…”

Aware of science’s triumph over the scourge of the bubonic plague, syphilis, typhus or cholera Nehru wrote to his daughter in Glimpses of World History in 1934, “sanitation and health and the conquest over some diseases depend on science.”

Nehru lives through his institutions in the age of the coronavirus

The All India Institute of Medical Sciences was set up in 1956, Maulana Azad Medical College in 1958, Govind Ballabh Pant Insitute of Postgraduate Medical Education and Research in 1961 along with other public health institutions. It is this faith Nehru placed on science and the relentless effort of the scientific institutions which he nurtured which would deliver us from this devastating worldwide scourge.