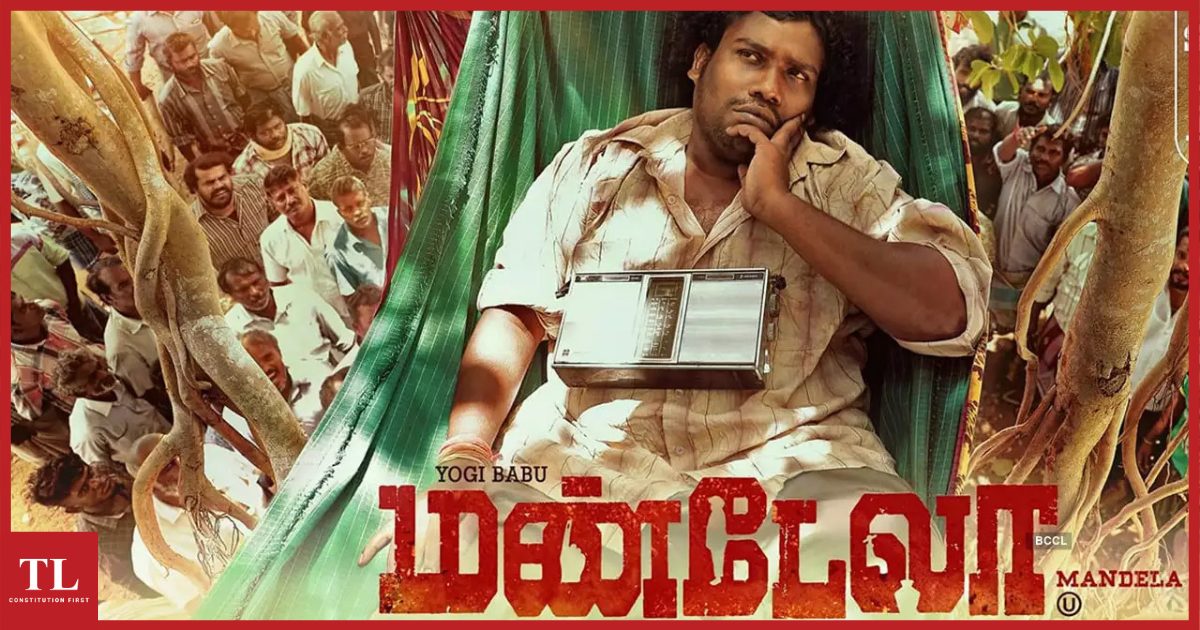 “Mandela” Film is a Stark Reflection of Caste in India

The stark difference among castes in India is seen in the humiliating practice of manual scavenging. A recent movie, “Mandela”, depicts the difference in a no-nonsense way. While many policies, including the Swachh Bharat Abhiyan, were meant to curb this practice, they have fallen flat, especially in rural areas, writes SHAILESHWAR YADAV.

A  FILM, “Mandela”, premiered recently on Netflix, is a political satire and comically rich. It captured the intricacies of caste-based oppression in Indian society.

The movie is set in a small village and follows events leading to a local body election. The storyline is simple: two half-brothers belonging to different regions and caste contest an election against each other when their father, the village leader, falls sick. The village is divided into two prominent groups led by the two brothers. Yogi Babu plays the role of Mandela, a lower caste barber who does not belong to either of the groups and is considered an outcast.

The opening scene of the film shows caste discrimination. The villagers can be seen in utter distress after a stray dog soiled the new and only public toilet in the village just before its inauguration. To clean the toilet, the quest for Mandela began.

A villager drove in a car to take Mandela to the toilet. However, as soon as Mandela sits in the car, he is slapped by the villager. “Get down! Don’t you know your caste? Have you got no shame? How dare you get in the car? You will get in the car as an equal?” the casteist villager questioned angrily. Mandela was then ordered to follow the car and reach the public toilet. Mandela then cleaned the toilet.

This practice of manually dealing with excreta is called manual scavenging by the Prohibition of Employment as Manual Scavengers and their Rehabilitation Act, 2013. But this law has remained toothless.

It provides for a public official to be appointed for the identification and rehabilitation of manual scavengers. However, the reality is that there is a lack of interference by such officials in rural areas.

What is the Real Toll?

However, this scene addresses the critical issue of manual scavenging. Recently, a report revealed the death of around 340 manual scavengers between 2016 and 2020. According to it, the official toll is only a fraction of the actual deaths due to the continuation of this practice.

Rural areas lack awareness, and the prevalence of caste identity and supremacy of the Varna system has encouraged manual scavenging. Dry latrines required to be cleaned by human scavengers are mainly found in rural areas. In fact, about 73% of dry latrines are located in rural areas.

In contrast, in urban areas, these latrines amount to 27%. In 2018, about 10,000 toilets were recorded in rural areas, including dry latrines. Women were forced to clean these toilets manually. Many policies to curb manual scavenging such as the Swachh Bharat Abhiyan have fallen flat, especially in rural areas.

The prevalence of dry latrines in rural areas raises an essential question on the reporting of manual scavenging cases. As seen in the movie, the village is located in remote outskirts, lacking the necessary institutional support to curb or at least report the practice.

According to the Swachh Bharat Mission – Rural website, about 107.2 million toilets have been constructed in rural India since October 22, 2014. Logically, the establishment of 107 million sanitation toilets with the aim of eradicating manual scavenging should have stopped it. But the situation remains grim.

In 2017, women meant to do manual scavenging took it to the Uttar Pradesh Assembly building by conducting a “march of justice”.

Though the Swachh Bharat Mission incurred an expenditure of Rs 10,000 crore annually, the allocation of funds for eradicating manual scavenging has decreased substantially.

It was only during the election years that the allocation of funds surged, especially during the general election of 2019. The fund allocation for 2018-19 and 2019-20 surged to Rs 85.76 core and Rs 84.8 crore respectively. Apart from the allocation, funds remain underutilised. In 2011-12, Rs 60 crore was refunded to the government by the National Safai Karamcharis Finance and Development Corporation.

Apart from the system’s apathy, societal pressure is another factor for the prevalence of this practice. In one confrontation, Mandela’s younger brother asks him: “Do you feel no pain or shame?” Mandela replies: “I can’t let go of my livelihood in the name of dignity.”

The fear of losing livelihood comes from the boycott and total restraint on the mobilisation of lower caste people.

Recently, Telangana’s Dalit community was boycotted in Almaspur district by the upper castes. The boycott resulted from the Dalits’ complaint under the Scheduled Caste and Scheduled Tribe (Prevention of Atrocities) Act, 1989, against 15 persons from upper caste communities who allegedly attacked them.

This gives a clear picture of how deeply embedded caste-based oppression is in rural India and to what extent Mandela was correct in protecting his livelihood.  Caste discrimination does not stop here; the stigmatisation of lower castes by high castes threatened the identity of Mandela as a human being. This even though Article 15, along with Article 17 of the Constitution, prohibits caste-based discrimination and abolishes untouchability. Mandela was discriminated against every single day, and so are thousands of Dalits who work as manual scavengers.

“Mandela” remains a no-nonsense movie portraying the actual image of rural, caste-based discrimination. The pressing need is to connect rural areas with comparatively progressive towns and help establish institutions for caste sensitisation and reportage. Otherwise, what Dr. BR Ambedkar said will be proved true: “What is a village but a sink of localism, a den of ignorance, narrow-mindedness and communalism?”

(Shaileshwar Yadav is from the National Law University, Jabalpur, Madhya Pradesh. The views expressed are personal.)