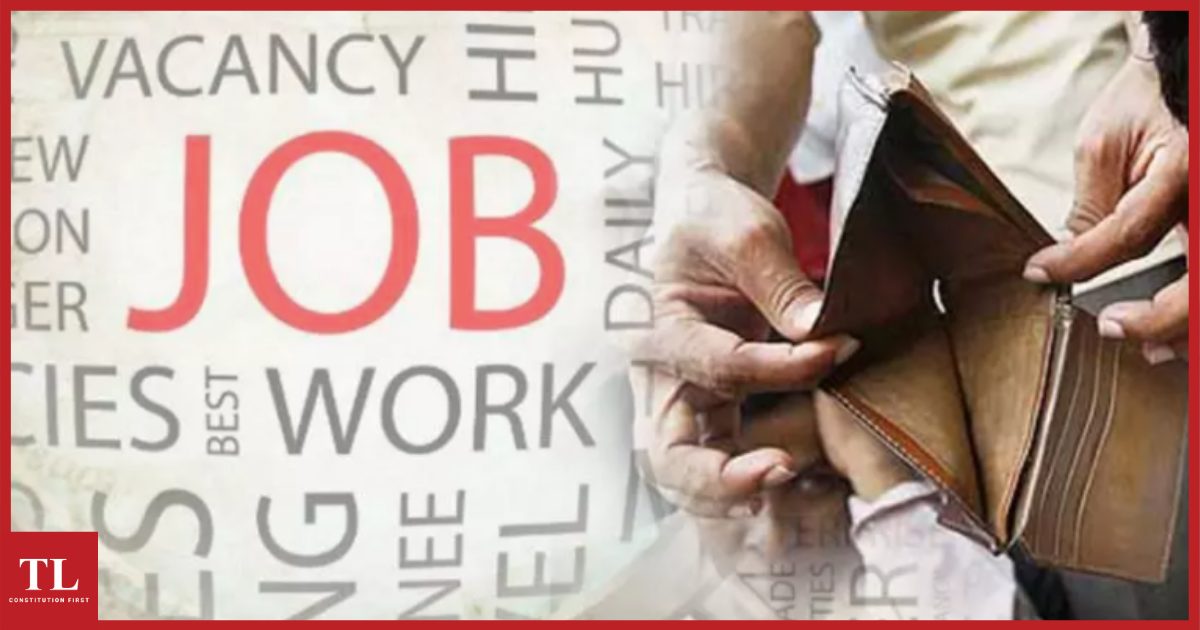 Over 2.5 crore existing jobs have been lost between January and May 2021. The bulk of these losses – about 2.2 crore – have occurred in April and May, the period in which India was engulfed in a brutal second wave of COVID-19, leading to state-level lockdowns of varying degrees. These chilling figures emerge from the latest results of the periodic surveys carried out by the Centre for Monitoring Indian Economy (CMIE).

Job losses are not unexpected since lockdowns directly impact the earning opportunities of the bulk of population which subsists on daily earnings in the informal sector. However, the government’s complete neglect of this dimension of the pandemic has deepened the distress, just as it did last year.

As the chart below shows, the total number of employed persons was estimated (through CMIE’s sample survey) at about 40.1 crore (401 million) in January 2021. It dipped slightly to 39.8 crore in February and March. Then it plummeted in April, and especially May. The varied effect of lockdowns in 2021 can be seen from disaggregated figures for occupations provided by CMIE. Daily wage workers appear to have been the worst sufferers, with over 1.72 crore (172 million) losing their jobs – and hence their incomes – in April-May 2021. [See chart below] Salaried and business sections, too, lost their jobs, their combined total working out to nearly 90 lakh (9 million) in the two months. These would be predominantly urban jobs.

As happened last year, farming jobs soaked up much of the unemployed. While April saw a loss of about 60 lakh (six million) jobs in the farming sector, probably propelled by the end of harvesting season for wheat and other rabi crops, with the advent of preparations in May for kharif sowing in the coming months, jobs increased by over 90 lakh (nine million), according to CMIE estimates. The net result was a gain of about 38 lakh (3.8 million) jobs in farming.

Some of the sectors exhibiting major job losses are shown in the chart below. Construction, which mostly employs low paid and informal labour on a large scale, suffered the most, according to CMIE estimates, throwing out over 88 lakh (8.8 million) workers in these two months. The other badly affected sectors include manufacturing (42 lakh jobs lost), hospitality (40 lakh) and trade (36 lakh). Rest of the job losses are distributed over many other sectors. What is notable is that the manufacturing sector, too, has lost jobs in this period though most of it was exempted from the restrictions in many states. There have been reports that where 50% of workforce was to be allowed for work, employers simply terminated services of the remaining employees.

The huge loss of jobs yet again reveals that the governments (state and Central) have not taken any measures to ensure that employers do not terminate services of their employees during restrictions due to COVID. In many cases, even earned wages have not been paid. In many states, contractual workers (even those employed with state governments, like school teachers) have not received wages for April or May, and sometimes for even further back. These employees are not counted as unemployed but in reality they are no better than those actually thrown out of jobs.

The aggregate unemployment rate jumped into double digit category in May 2021 with the average for May being nearly 12%, though the 30-day moving average reported by CMIE was even higher at nearly 13% on 4 June.

As the chart below shows, job losses are much higher in the urban areas – in May, urban unemployment was pegged at nearly 15%. In the rural areas, the jobless rate was estimated at nearly 11%. This wide difference is not surprising since farming is absorbing a huge proportion of the jobless people. Urban areas do not have that kind of options, except that migrant workers, like last year, quickly rushed back to their villages leaving behind the towns and cities they were working in.

Parsing the sectoral job losses in the light of higher urban joblessness indicates that most of the urban-based construction, manufacturing, hospitality (restaurants and hotels) and trade (shops, malls etc.) appear to have thrown out workers during these months. No Relief for Jobless

In this dire situation, governments should have come forth with immediate relief measures in the form of financial support for families, directions to employers not to hold back wages (earned or for the period of lockdowns), stopping evictions of tenants, free medical services and more foodgrains and essential items to working class families.

However, just like last year, there has been no move from the miserly Narendra Modi government, nor from the cash-strapped state governments, barring a few. The only relief offered by the Central government has been in the form of additional 5 kg foodgrain per month for those with ration cards. Not only is this amount of grain insufficient in itself, but the absence of any other financial support has devastated working class families across the country.