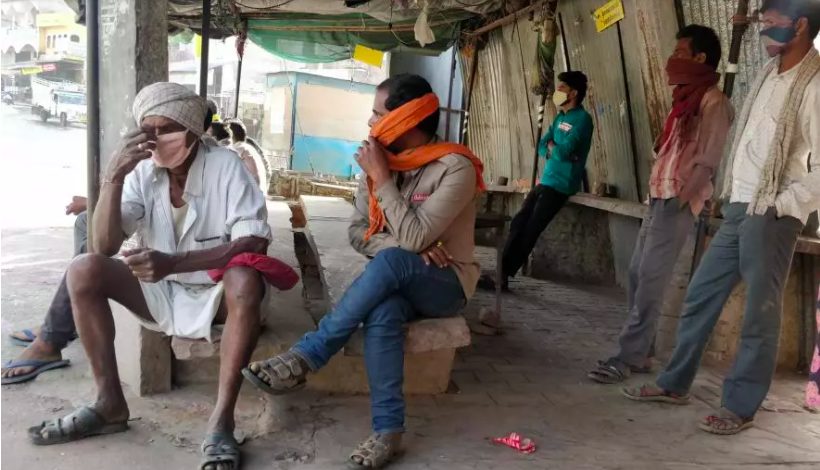 Daily wage workers at the mazdoor naka in Gogunda waiting for contractors to hire them.
Civil SocietyCOVID-19EconomyGovernanceLabour LawLabour Rights

This report focuses on the realities of and issues faced by return migrant workers and local daily wage labourers in Gogunda in Udaipur district of Rajasthan through the common physical location of the Gogunda bus stand and the common intangible market space. It explores the ways in which the two distinct labour groups impact each other while navigating paradoxical lockdown restrictions.

The nakas and inter-district buses that trundle through the main roads of Gogunda block in Rajasthan at 7 a.m. with freshly painted physical distancing circles, are emptier than usual. Men and women with gamchhas wrapped around the lower half of their faces pile out of jeeps and into buses headed to Udaipur city at a crossroads adorned with a statue of Maharana Pratap Singh atop his horse Chetak.

One bus stands out, a large sleeper coach from which groups of young boys and men alight, many more than the bus can normally hold. Pratap Circle, therefore, became the focus of this story as a geographically common intersection. Migrant workers arrive from other states, primarily Gujarat, and local daily wage labourers converge from different parts of Udaipur district to travel onwards to construction sites or mazdoor nakas (intersections where daily wage labourers wait for contractors to hire them for the day) in Udaipur city.

With COVID-19 related restrictions and guidelines constantly changing, fear and panic in the region are common responses. In Gogunda block, young migrant workers who worked in a restaurant kitchen in Rajkot, Gujarat, were sent back by their employer as early as mid-April with a promise that their pending wages would be transferred into their bank accounts, if they had one. This was before any lockdown restrictions were imposed in either state.

Returning in sleeper coaches, they were forced to pay Rs. 800 as opposed to the usual Rs. 600-700 and squeeze into a single berth along with four-five others. Their bus had no trouble at all crossing the border unlike an older group of male migrants. This group’s similarly overcrowded and overcharging bus had been stopped at the border between Rajasthan and Gujarat, fortunately for nothing more than the police noting down their Aadhaar numbers and waving them through. This was unlike last year’s violent sanitiser spraying of migrant workers at the borders of certain Indian states.

Several of these young men were at the bus stand trying on new sneakers and sandals at the shoe shop and buying toffees and sweets to distribute in their villages when this reporter approached them. They explained that the hostel in the canteen of which they worked in Jamnagar had shut two or three days prior leaving them unemployed and unpaid. They, too, were assured that their wages would be transferred directly into their bank accounts and are optimistic that they can return to work in a month or so.

Back at the mazdoor naka, only a handful of people can be found unlike last month. According to them, the police don’t interfere with worksites but ask questions at the Udaipur nakas about COVID-19 precautions such as the wearing of masks or their destinations. For some, work timings have changed such that they are not given a lunch break and are sent home by 4 p.m. instead of the usual 5 or 6 p.m. due to curfew restrictions on transport.

While in several interiors of Gogunda region and in the town itself, pending work is going on, new sites as well as those in Udaipur city have had to close down due to issues with supply of raw material. Local guidelines allow non-essential shops, such as those supplying construction materials, to remain open only till 11 a.m., a paradox that renders worksites remaining open pointless in reality, especially for those migrant workers who have returned home and may need to seek work locally.

Dharemesh ji, a contractor with 75 fixed daily wage labourers working for him, said that irregular public transport due to COVID-19 norms has affected the mobility of both labour and capital. Workers are unable to reach sites or fear that they may miss the last bus home due to curfew restrictions as sites usually shut at 5:30 p.m. Material can now be supplied only in the morning and not as per the requirement of the site. This shortage is made worse by the fact that it has become more expensive to procure material especially sand that is banned in any case.

For Dharmesh ji, it is only his labourers that can keep his single site going, or not. “Kal se site band hai. Agar ayenge toh khula rakhenge nahi toh band kar denge (The site has been shut since yesterday. If they come, I will keep it open, if not I will shut it.)” Additionally, with several migrants returning from other states testing positive and people in those villages falling sick, sites located in those areas are shut.

For migrant workers returning from Gujarat, seeking work in a place where there is already a shortage of it, now heightened, is near impossible. For local daily wage labourers, an everyday struggle has turned into fierce competition. And for both contractors and workers, the COVID-19 related lockdown just compounds the problem of availability of work opportunities by affecting supply chains and labour mobility. Thus, it is interesting to note how these two labour markets, distinct in terms of skillsets, are intertwined such that they impact each other during the pandemic.

Dhapu Bai, a construction worker who lays floors from Vani village near Gogunda, noted that this time’s COVID-19 surge is different. “Pehle jab corona aaya tha, toh kaam badhiya chal rah tha, lekin abhi toh bimari hai. Kaam bhi kam, bimari bhi zyada hai. (When corona came last time, work went on just fine, but now there is sickness. Work is less, the disease has also spread more.)” With people falling sick but not getting tested or vaccinated due to mistrust and stigma, it is near impossible to attribute COVID-19 to their symptoms such as fever, body ache and cough. While Dhapu Bai does skilled work she earns only Rs. 300 per day as opposed to her male counterparts who earn up to Rs. 700 per day, marginally above the daily earnings of other women who work as unskilled helpers in construction sites nearby.

For daily wage labourers who have fixed contracts in place, however, work is still available and they prefer to make their way to the construction sites, three on a bike considering the significantly reduced frequency of buses. Even if the work on their construction site stops due to a shortage of labour or material, their contractor comes to their rescue, telling them about new worksites. But for those who are temporary workers, a small break of two days due to lockdown restrictions on transport over the weekend costs them their wages. Yet, salaries have not been cut so far, which is heartening.

With lockdowns and curfews being imposed in several cities and states, and the health crisis growing rapidly, migrant workers have begun to return home in large numbers. It is important to note that while the pandemic seems to be spreading in Gogunda region as well, people are still optimistic about returning to work soon such as the group of men, who worked in a hostel canteen in Jamnagar and were buying new shoes and toffees. Interestingly, the city is still an alluring option for them despite the hardships faced there.

Is this because, despite having been treated so poorly during last year’s humanitarian crisis, it is a life they still wish to emulate – as people who return from the city and are able to afford brand new sandals to wear and sweets to distribute? Or is it because the COVID-19 pandemic has laid bare the stark differences in rural and urban employment opportunities, giving them no other choice?

Perhaps we will know only once the adverse impact of the virus on livelihood options in both rural and urban areas can be assessed.

(The author is currently a Field Fellow at Aajeevika Bureau, Udaipur, working on migrant labour issues. She has completed her BA in Anthropology and Psychology from St. Xavier’s College, Mumbai.)

This article was first published by Newsclick