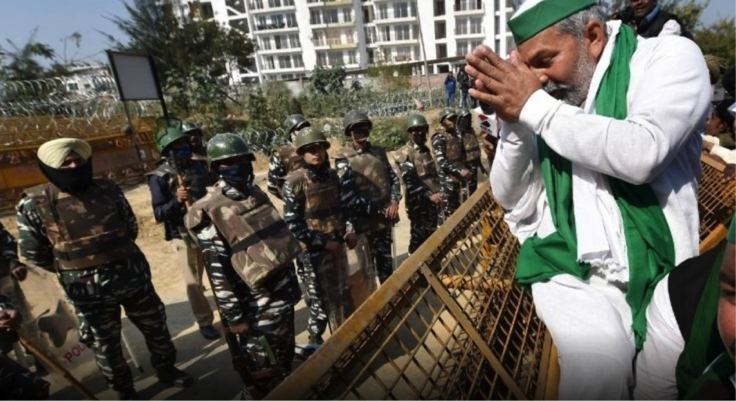 Farmers Organize “Chakka Jam” as Protests Scale-Up in the Country

The Farmers Union organised a nationwide protest against the three central farm laws on Saturday. This was the second major rally after the Republic Day protest, security forces tightened barriers as the farmers demanded action reports SAIKEERTHI.

Farmers organised a nationwide peaceful protest on February 6 in response to the lack of action taken by the government against the growing demand to nullify the Centre’s farm laws. The strike which began at noon lasted for around three hours. The farmers had hoped to use this opportunity to exert a unified pressure on the government to meet their demands.

The ‘Chakka Jam’ protests led by Samyukt Kisan Morcha (SKM) was observed in many parts across the country except for Uttarakhand, Uttar Pradesh and Delhi city. According to reports, the Bharatiya Kisan Morcha has stated that they had withdrawn protests from the three areas due to possibilities of it turning violent.

The farmers blocked many routes along the major national and state highways in the country. While the union had previously stated that the protests will be peaceful, the police had tightened the security.

Measures Taken by the Police

Though the union had mentioned that the protests do not intend to be held in Delhi, the capital saw extra security staff being deployed and strengthening of barricades. Riot control vehicles, around 50,000 police officers, reserve forests personnel and paramilitary forces were deployed in the Delhi-NCR region. Metro stations around the city had also been put on alert and entry into eight of these stations were blocked.

The three key protest sites of Ghazipur, Tikri and Singhu saw extensive protective measures being taken up by the police. While Ghazipur saw the deployment of water cannon vehicles, Tikri borders had layered protection using barbed wires and concrete blocks. Areas near Red Fort had heightened the number of security detail posted after the Republic Day violence that unfolded near it.

Drones were increasingly used to monitor the situation on the streets and foot patrolling squads were posted to maintain law and order.

#MHA orders temporary suspension of the internet in the areas of Singhu, Ghazipur and Tikri and their adjoining areas in NCT till 23:59 hours on Feb 6#FarmersProtests pic.twitter.com/DSM3m08hkc

The Ministry of Home Affairs ordered the temporary suspension of internet services in the areas of Singhu, Ghazipur and Tikri. The suspension is the fourth in a row since the January 26th Republic Day violence. The circular has cited that the order seeks to maintain “public safety” and “public emergency” calling the step necessary and expedient to order.

Around fifty people were detained at Shaheedi Park in central Delhi, two hours after the Chakka Jam protests began. Those detained were allegedly left-wing activists that had held protests in response to the nationwide support demanded by the farmers union.

Many protests have erupted in various parts of the country such as Telangana where police forces removed protestors from aa highway on the outskirts of Hyderabad.

In cities like Bangalore and Pune, the protestors were detained by authorities to avoid any chaos.

(Saikeerthi is a journalism student at Symbiosis Institute of Media and Communication, Pune and an intern with The Leaflet)