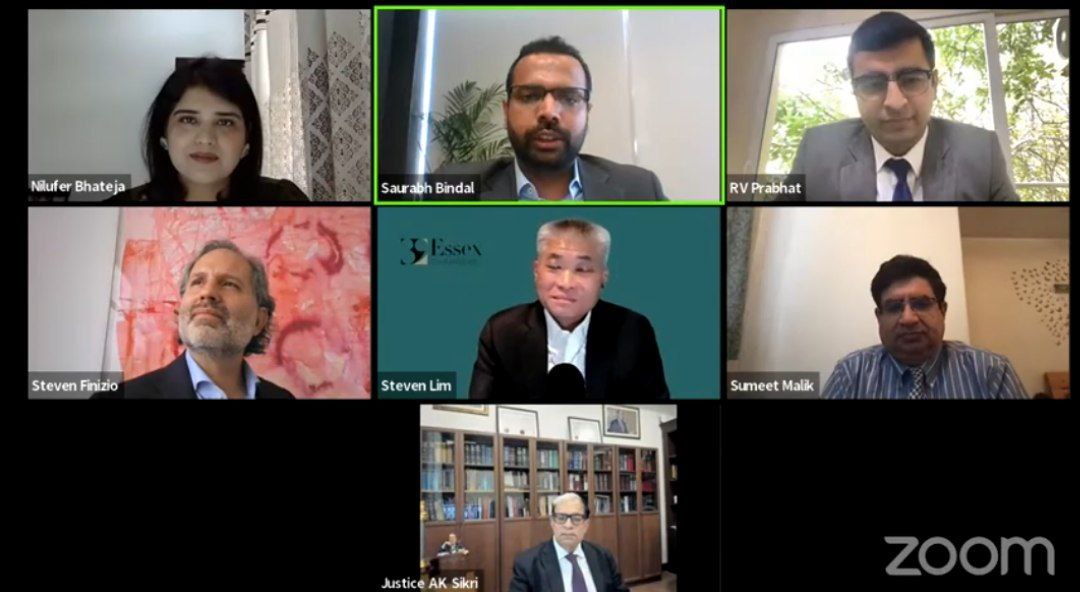 The launch event of two new books on the Arbitration and Conciliation Act, 1996 saw retired judge of the Supreme Court and now an International Judge at the Singapore International Commercial Court, Justice A.K. Sikri express his relief at Indian arbitration’s return to form after being temporarily knocked off course by tumultuous cases.

The launch was attended by luminaries in the field such as former Supreme Court judge, Justice A.K. Sikri, Singaporean arbitrator and advocate Steven Lim, British lawyer and arbitrator Steven Finizio, and EBC director Sumeet Malik. The launch was followed by an insightful discussion on the amendments to the Arbitration and Conciliation Act, and how they have impacted the course of arbitration in India. Practitioners also commented upon the exemplary growth of arbitration in India.

Recent amendments to the Arbitration and Conciliation Act, 1996 were a resounding message to the international community about India’s conducive arbitration environment: Justice A.K. Sikri

The launch had Justice Sikri speaking about Bindal and Prabhat’s book, which is a commentary on the Act and traces important cases across the years, marking the trajectory of arbitration law in India. He congratulated Bindal on his prolific output across the years, and for writing his fourth book. Bindal has also revised the latest edition of Dr. Singh’s book, which has a foreword by Justice Sikri.

Justice Sikri reminisced about intending to write a volume for many years but being unable to make time. He mentioned that Bindal and Prabhat’s commentary had a foreword penned by Justice Rohinton Fali Nariman, which should speak volumes about its scholarship.

Now an international judge at the Singapore International Commercial Court, Justice Sikri iterated his relief in Indian arbitration’s return to form after being temporarily knocked off course by tumultuous cases. He cited the examples of the Supreme Court’s judgments in Bhatia International versus Bulk Trading S.A. (2002), which regressed from the pro-arbitration mode of the 1996 Act by holding that Indian courts could intervene in foreign arbitrations by issuing interim measures, and Oil & Natural Gas Corporation Ltd. versus Saw Pipes (2003) (‘ONGC case’), which unduly expanded the scope of judicial review of arbitral awards.

This was a major deviation from the limited judicial intervention that was the ethos of the 1996 Act. Recent amendments to the Act, Justice Sikri stated, were a resounding message to the international community about India’s conducive arbitration environment. The new book captures theoretical debates and the essence of arbitration in India, with special reference to its emphasis on speed and affordability.

In a discussion lasting a little over an hour, the panellists debated questions on Indian arbitration from domestic and international perspectives. On being asked how the amendments to the Act had transformed India, Justice Sikri elaborated upon the interpretation of the amendments by the judiciary. He described arbitration as a hybrid activity with equal parts played by regular courts and tribunals. This is because the courts eventually enforce the arbitral awards and, in certain circumstances, entertain challenges to the awards.

However, this does not render the courts as appellate bodies, and they are only supposed to effectuate the arbitral award and thus aid the process. The Indian arbitration law is largely based on the UNCITRAL (United Nations Commission on International Trade Law) Model Law on International Commercial Arbitration, similar to Singapore and the UK. However, Singapore has made gigantic leaps and has become the de facto hub for arbitration, owing to the robust system of enforcing arbitral awards and an environment that is enormously conducive.

Bhatia International was talked about in legal circles as the case that muddied the waters of Indian arbitration, and it and the ONGC case were not in the spirit of the original 1996 Act and deviated from its principles.

With reference to amendments in India, the 2015 amendment was introduced on the recommendations of the Law Commission of India to undo the missteps that the court had unfortunately ventured into with Bhatia International and the ONGC case. Justice Sikri commented upon Bhatia International being talked about in legal circles as the case that muddied the waters of Indian arbitration, and how the two cases were not in the spirit of the original Act and deviated from its principles. The amendment did away with an automatic stay on proceedings, and the courts were empowered to exercise their discretion in the same. The 2019 amendment, however, was not intended to undo any wrongs, but was a step in the direction of making India a jurisdiction that was conducive to arbitration, by introducing the provision of institutional arbitrations.

Lim, who mainly practices in Singapore and has arbitrated issues involving Indian parties, was all praise for the new amendments and expressed hope at India leading the domain of arbitration through its due recognition of foreign courts’ orders.

Prabhat expressed dismay at the 2021 amendment, which had, in his opinion, failed to recognize the spirit of the 1996 Act. This is because it has empowered courts to unconditionally stay an arbitral award by finding corruption or fraud in the arbitral proceedings. Prabhat interpreted this as a step back as it permits the losing party (in the arbitral award) to defeat the award by merely claiming the two grounds, as the threshold of the prima facie perception of the court has not been specified.

Justice Sikri agreed with Prabhat’s concerns but reiterated the rectitude and legal judgement of the court to not get carried away by the losing parties’ assertions, implying that some concerns may be premature as the threshold to establish fraud or corruption in the arbitral award was extremely high.

When asked, Lim was of the unequivocal opinion that Bharat Aluminium Co. versus Kaiser Aluminium Technical Service, Inc. (2012) (more commonly referred to as the ‘BALCO judgment’) was the most notable Supreme Court judgment in India’s arbitration history, and it changed the course of Indian arbitration in the most significant way. It did away with the interventionist approach followed by the courts thus far, and decisively held a pro-arbitration stance.

The BALCO judgment was the most notable Supreme Court judgment in India’s arbitration history, and it changed the course of Indian arbitration in the most significant way. It did away with the interventionist approach followed by the courts thus far, and decisively held a pro-arbitration stance: Steven Lim

Finizio commended the recent amendments to the 1996 Act for being the first through the wall in recognizing the important challenges that arbitration as a practice faces today. He explained the need for the development of an arbitration community in India which considered talents beyond the usual, though not undesirable, reliance on retired judges. Justice Sikri agreed with Finizio and expressed hope about India becoming an arbitration hub similar in scope and ambition to Singapore.